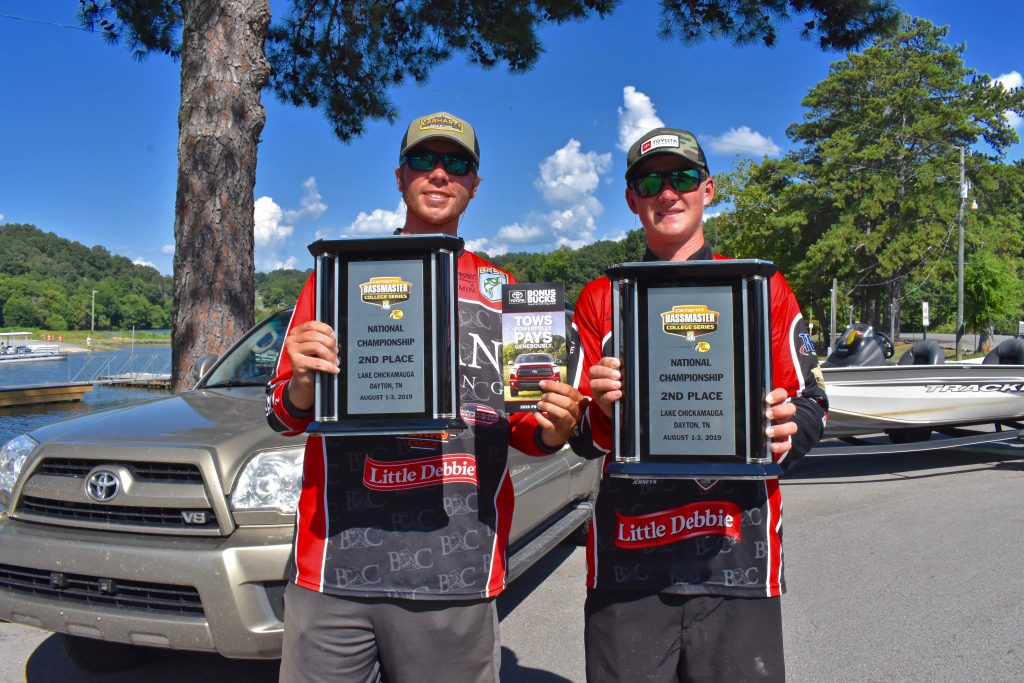 Sands, who recently graduated with a degree in Business Administration drives a 2006 Toyota 4Runner to tow his 18-foot aluminum Tracker to lakes all around the country for college fishing competition.

Both Sands and Dimauro were praising of the old 4Runner, saying it was reliable as it is spacious. They pointed out how much gear they had packed in the mid sized SUV and said the enclosed vehicle was an advantage.
“Heck we’ve both slept in that car for fishing tournaments before,” said Dimauro, a junior studying Business Marketing. “We bunked at the boat ramp for a couple nights on Lake Seminole for an FLW college tournament earlier this year.”

Towing with the Toyota 4Runner has been a well thought out decision, not only for the qualities mentioned above, but more so to ensure they are eligible for the College Series segment of the Bonus Bucks contingency program.

“What’s not to love about Bonus Bucks,” Sands asked. “Any year tow vehicle qualifies you for the college program, which is awesome, and the extra winnings go a long way to pay for any expenses our school doesn’t cover. We’ve won Bonus Bucks in five or six events this year alone and that money has helped out a lot.”

Sands and Dimauro weren’t taking much time to celebrate their impressive 2nd place finish amongst the nations best college anglers. Instead, they were heading back to the house to pack for a drive to Kentucky Lake, so they could both serve as boat captains for their younger brothers in the Mossy Oak Fishing Bassmaster High School Championship.

Taking time to support the next generation and give back to the sport they love proves that while they fell just short of hoisting the 1st place trophies, there is no doubt these two left the Dayton Boat Dock as champions in living life right.

To learn more, or to get registered for Toyota Bonus Bucks College Series, follow this link: https://www.toyotatrucksbonusbucks.com/college . Just like the official Bonus Bucks program anglers don’t need to win an event, they just have to be the highest finishing registered participant. If you’d rather call than click, give (918) 742-6424 a call and they’ll be happy to help you out.