PALATKA, Fla. — During the weeks leading up to the Power-Pole Bassmaster Elite at St. Johns River, brothers Chris and Cory Johnston insisted the Florida fishery reminded them a lot of the waters they grew up fishing back home in Canada. 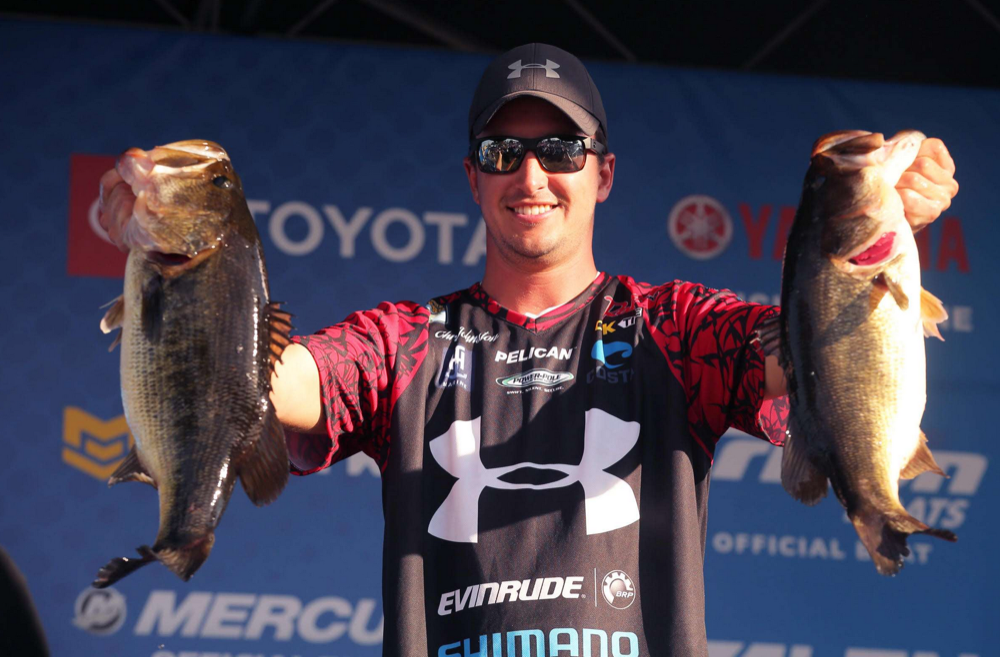 Those who may have doubted them know better now.

Chris Johnston, who had fished a grand total of four B.A.S.S. events prior to this week, caught five bass during Friday’s round that weighed 25 pounds, 11 ounces and took the lead in the season-opening Elite event with a two-day total of 47-0.

Cory Johnston, who has teamed with his brother to dissect the fishery for months, caught 21-1 himself Friday and moved into sixth place at 41-0.

“I just hope I’m a couple of ounces ahead of him after tomorrow and then hopefully again on Sunday,” Chris said of his brother. “We always have a rivalry between us. We’re always trying to beat each other for bragging rights.

“I’ve got a little lead on him now, and hopefully I can carry it through the rest of the week.”

Chris said he’s been fishing for mixture of bedding bass that he can’t see and prespawn fish that are still working their way onto the beds. Like most of the field, he expects the weather to be a factor on Saturday, when the forecast calls for a shift from the sunny, clear conditions of the past two days to somewhat cooler temperatures and 10- to 20-mph winds.

“It’ll probably affect me, but I think everyone’s in the same boat,” Johnston said. “I went around looking today for three or four hours, marked a few fish and saw a couple of areas I like. If Plan A fails, I’ll go to Plan B.”

Livesay, who caught 19-12 on Day 1, got off to a fast start Friday, putting 12 pounds in his livewell in less than 15 minutes. Once that area started receiving pressure, he began checking out new fishing areas and put together a five-bass limit that weighed 26-6.

“I got on a little pattern and caught a big one in a spot,” he said. “Then I thought the same thing should work in another spot — and sure enough, I caught another big one.”

Then, as strange as it sounds, he basically started fishing where he didn’t expect to catch a bass.

“It’s gonna be so weird tomorrow with this weather coming in, and I didn’t want to burn any 2- or 3-pounders that might help me a lot,” he said. “So I just went to some water I’d never even looked at and caught a 5-pounder.”

Menendez, who caught 24-8 Thursday, added 21-6 Friday and held on to third place with 45-14. He scored early in the day with a 6-pounder that he wasn’t really expecting to catch.

“That’s a spot where I’ve always caught 2- to 4-pounders,” Menendez said. “So when you pull up there and catch a 6-pounder, you’re thinking, ‘Well, giddy-up, it’s gonna be a good day.’”

A slight shift in technique helped Menendez to his quick start, but then he went back to the same tactics he used on Day 1 — tactics he’s not quite ready to discuss.

“I had to change baits today, and the change gave me the bites early so I could slow down and fish really thorough,” Menendez said. “Then during the afternoon, I went back to what I caught them on Thursday and got into another one of those big ones, a 5-plus, and another one that was about 4 pounds.

“Those really help you.”

Fourth and fifth place represent the age diversity on this year’s Elite Series, with the 29-year-old Cobb leading the 72-year-old legend, Clunn, by less than 2 pounds. Cobb caught 23-1 Friday to push his mark to 42-14, while the seemingly ageless Clunn caught 23-11 to lift his two-day total to 41-0. Clunn won his 15th Bassmaster title on these same waters when the Elite Series last stopped here in 2016.

Cory Johnston is tied statistically with Clunn for fifth place, but is credited for sixth place because Clunn has had the bigger single-day bag of the two and won the tie-breaker.

Cory said he’s not conceding anything to his brother — or anyone else.

“No one wants to be behind his brother,” he said. “The competition that we have amongst ourselves and our friends, that’s bigger than anything. So I just want to beat him.

“I’ll be out there trying to win.”

The tournament will resume Saturday with the Top 35 remaining anglers taking off from Riverfront Park at 7:30 a.m. ET. The weigh-in will be back at the park at 4:10 p.m., with only the Top 10 anglers advancing to Championship Sunday with a chance to win the $100,000 first-place prize.