LAKE FORK, Texas — For Tyler Cory, everything was indeed bigger in Texas. 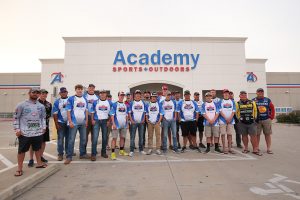 All 12 members of the Bassmaster All-American Fishing Team presented by Academy Sports + Outdoors were randomly paired with a pro from the Bassmaster Elite Series. Both the pros and the All-Americans were allowed to weigh their biggest fish of the day.

Cory drew Australian pro Carl Jocumsen, who caught a 5-11 — and the pair took first place in the event with a two-fish total of 12-6.

At 6-foot-8, Cory was also the biggest All-American in the field.

“There was a little bit of a shad spawn going on this morning,” Cory said. “I think because of that, the frog bite was just nuts. It was a great day.”

The tournament, which was held in conjunction with Toyota Bassmaster Texas Fest benefiting Texas Parks and Wildlife Department, was held on 814-acre Lake Quitman. The weigh-in took place back at the Sabine River Authority facility on the banks of Lake Fork atop the same stage where the Elite Series pros have been weighing in.

Jocumsen said he had every bit as much fun as the youngster who was sharing his boat.

“I’m having a tough season,” said Jocumsen. “I had a tough day Friday and didn’t make the cut for the semifinal round. But that’s the thing about fishing — there’s always another day.

“I got to go out today and fish a frog with a very impressive young man.”

The weight placed them just ahead of Elite Series pro Shane Lineberger of North Carolina and All-American Parker Guy of Ocilla, Ga., who had two fish for a total of 11-8. Lineberger’s fish weighed 6-6, and Guy’s bass weighed 5-2.

Third place went to the team of Elite Series pro Brian Snowden of Missouri and All-American Dylan Fogarty of Mechanicsburg, Pa., with 10-14. Lineberger had a 3-10, and Fogarty caught a 7-4 — another fish that ranked as the angler’s personal best.

B.A.S.S. received more than 400 nominations for the 2019 High School All-American team from all over the country. Judges first worked to select members of the All-State teams and then whittled the list down to choose 12 All-Americans.

About B.A.S.S.
B.A.S.S. is the worldwide authority on bass fishing and keeper of the culture of the sport, providing cutting edge content on bass fishing whenever, wherever and however bass fishing fans want to use it. Headquartered in Birmingham, Ala., the 510,000-member organization’s fully integrated media platforms include the industry’s leading magazines (Bassmaster and B.A.S.S. Times), website (Bassmaster.com), television show (The Bassmasters on ESPN2), radio show (Bassmaster Radio), social media programs and events. For more than 50 years, B.A.S.S. has been dedicated to access, conservation and youth fishing.