BRANSON, Mo. – If it felt like the fishing was a little slower Saturday during the second Shotgun Round at the Bass Pro Tour Bad Boy Mowers Stage Seven Presented by Covercraft, that’s because it was. Weekend boat traffic, changing weather, and fishing pressure may have contributed to the slightly lower numbers during the. But there were two other reasons it seemed like a more sluggish day: Wheeler and Fukae.
Jacob Wheeler and Shinichi Fukae’s 100-plus-pound onslaughts on Day 1 on Table Rock Lake may have overshadowed Day 2 leader Ott DeFoe’s 53 fish for 81 pounds, 7 ounces somehow, but DeFoe’s numbers are stout.
This is still Table Rock Lake, and the field is still catching them at a rapid pace.

DeFoe Does it Again
During Stage Six, DeFoe kicked off the event with a 55-bass, 78-2 score in the Shotgun Round, and even though those totals are similar to Saturday’s, he did it in a much different fashion. 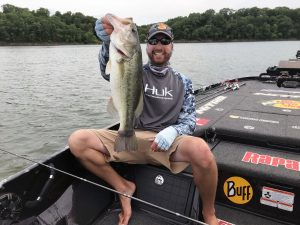 His two primary patterns from our last event are no longer a factor: the shad spawn and spawning bass.
“It’s a complete 180-degree change from last time,” DeFoe said. “Since we are not starting until noon, we aren’t able to take advantage of the shad spawn, and the bass are now in their post-spawn and summer pattern. I was catching them early for the shad spawn and then targeting spawning fish, but that is all done. The fish have moved out and are grouping up.
A different event, but similar results for DeFoe, who leads Group B heading into his Elimination Round on Monday. This is the second time that he’s lead a round, and he has also been in second place on two other occasions this season.
Ott DeFoe dominated the second and third periods to win the second Shotgun Round.

Connell Catches Up
When Period 2 came to a close, Dustin Connell was sitting in 7th place with 38-1. Right after the break, he made a bait change and started catching them. You could tell something was about to happen. 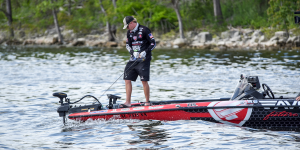 On MLF NOW! he said, “I’ve been waiting all day for the evening bite,” and things started to improve for him. His Period 3 weight was nearly more than the first two periods combined, and he ended up with 53 fish (the same as DeFoe) and a 74-8 mark for the day.
“The morning didn’t go as planned, and I think the pressure got to my deep schools, but I went to my other area and started getting them to bite later in the day,” Connell said.
He did his damage with multiple lures, but mainly targeted schools of spotted bass with a Googan Baits Drag N Drop fished on a drop-shot rig with a Favorite Fishing Rush Spinning Rod and 10-pound Seaguar Tatsu fluorocarbon line.
He feels confident that with a few more bass during the Elimination Round 2, he can move on to the Knockout Round.
“I have a pretty good cushion and will catch some and then hopefully get a chance to practice and find more schools,” he added.

Elimination Round Ahead
The 40 anglers who fished yesterday in Group A will roll out onto Table Rock Sunday at noon CT with changing weather. The air temperature is set to drop to a high of 86-degrees and scattered afternoon thunderstorms are predicted for the Branson, Missouri area.
Daily Winners
Shotgun Round 2 daily awards were: • The Berkley Big Bass of the day was a 5-02 bass caught by Casey Ashley • Both DeFoe and Connell caught 53 bass to share the Berkley Catch Count award • DeFoe also earned the Phoenix Boats Daily Leader award with his 81-07

Looking Ahead
The field will carry their Shotgun Round weights into Elimination Rounds on Sunday and Monday. The Top 20 anglers from each of those Elimination groups will advance to a 40-angler Knockout Round on Monday, June 3 – weights will be zeroed, making the Knockout a one-day scramble. The Top 10 anglers in the Knockout Round will advance to the Championship Round on Wednesday, June 5.
How, When, Where to Watch
Competition begins Sunday at 12 p.m. CT, with live, official scoring available via SCORETRACKER® on MajorLeagueFishing.com and on the MLF app. The MLF NOW! live stream begins at 11:55 a.m. CT with coverage of Period 1, with Steven “Lurch” Scott and Rob Newell calling the live action. Full coverage continues at 2:30 p.m. when Chad McKee, JT Kenney, Marty Stone, and Natalie Dillon pick up the commentary and analysis until lines out at 8 p.m. There will be no Berkley Postgame Show until the Championship Round.