PALATKA, Fla. — Kelley Jaye knows the potential perils of fishing history, but doing so proved to be a wise decision Saturday as he took the Day 1 lead in the AFTCO Bassmaster Elite at St. Johns River. 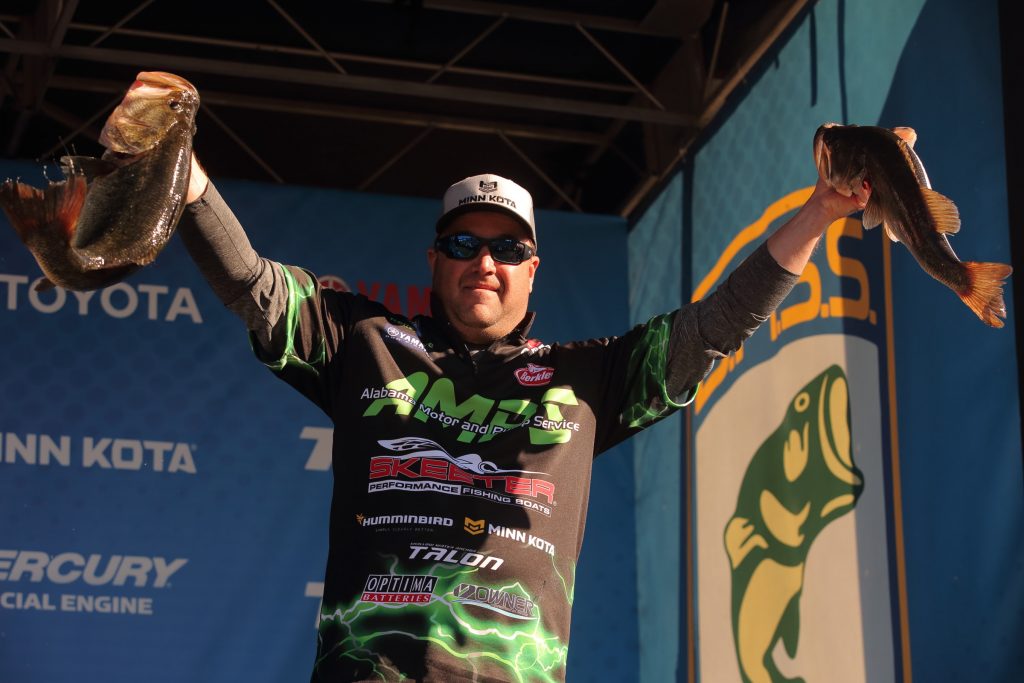 Kelley Jaye, of Dadeville, Ala., is leading after Day 1 of the AFTCO Bassmaster Elite at St. Johns River with 21 pounds, 7 ounces.  Photo by Seigo Saito/B.A.S.S.

The Dadeville, Ala., pro, who is beginning his eighth-year on the Bassmaster Elite Series, brought in a five-bass limit that weighed 21 pounds, 7 ounces.

Last year, Jaye fished the St. Johns’ offshore structure and earned an 11th-place finish. Today, he figured the cold front that brought big winds and postponed the tournament’s scheduled start by two days likely stalled much of the spawning movement that seemed be happening prior to the weather.

That hunch sent him offshore again.

“I’m catching them in the same place as last year, doing the same thing,” said Jaye, who has eight career Top 10 finishes with B.A.S.S. “I think the days off helped because I have a lot of boats around me. Hopefully, all those boats will stay on the bank tomorrow and leave me alone.”

Jaye went directly to his spot from takeoff Saturday, as he knew the post-frontal day would bring the usual “bluebird” conditions — high pressure and lots of sunlight. The first few hours of his day proved most productive, with the fish cooperating better before the sun got high overhead.

“It happened kind of fast, I had all my fish before 10 a.m.,” Jaye said. “The bite slowed down, but they live here where I’m fishing. It’s a grind, just like last year. I’m only getting eight or nine bites a day, but they were good fish.

“Tomorrow, I’m just going to grind it out again and hope I get the right five bites.”

Jaye said he targeted 4 to 6 feet of water and caught his fish on a jerkbait. He kept the details guarded, but noted that he alternated between two colors specifically matched to various water colors he encountered.

Despite two days of fierce winds and a sharp decline in air temperature, Jaye said his spot, which measures about 300 yards long and 200 yards wide, held up well. He didn’t disclose his specific area, but he said its location helped keep the water temperature at a comfortable level.

“I caught them earlier this morning on the lower tide; I don’t know if they could see the bait better or what,” he said. “Then as the tide came up, the water started muddying up and the bite slowed down.”

Beefing up his jerkbaits by replacing the stock No. 5 lightwire trebles with No. 4 Owner treble hooks gave him more firepower. Still, Jaye said he had to take his time with each fish.

Anchoring Jaye’s bag was a 9-2 largemouth that leads the race for Phoenix Boats Big Bass of the week.

“My first fish was a 4 1/2 and then I caught that big one,” Jaye said. “When I caught those two big ones, I thought I was going to have a really big bag, based on what I’d caught in there in the past, but I’m pleased with what I had.”

Paul Mueller of Naugatuck, Conn., is in second place with 20-8. One of the few anglers who ran north (downriver) from the take-off site at Palatka City Dock and Boat Ramp, Mueller caught most of his fish on a swim jig.

Timing, he said, was the key to his success.

“I spent half my day looking for new stuff, because I knew I had to fish my area at the right time; meaning when the water got a little higher and the sun got higher,” Mueller said. “You’re going to have a slow start with the weather that we had.

“This morning, I knew I had to learn something and try to find something new, so I treated it like a practice day. Then I went into my area and, thankfully, got a couple of good bites. I had two good fish and three decent fish, but those two good ones anchored my weight today.”

Clark Wendlandt of Leander, Texas, is in third place with 20 pounds. With the day’s chilly start quickly yielding to sunny, warming conditions, the seasoned pro trusted his experience.

He knew the weekend’s full moon, plus rising temperatures, would spur a spawning movement.

“I don’t normally bet on them coming, but I kind of bet on them coming; I just thought that was what was going to happen — the full moon is too strong this time of year,” Wendlandt said. “I caught fish scattered throughout the day. I’m not getting tons of bites.”

Wendlant said he stuck with flipping/pitching baits because that forced him to slow down and fish his area thoroughly. He was able to spot some beds in the shallow, low-tide scenario, but most of his catches were unseen fish.

Sunday’s takeoff is scheduled for 7:15 a.m. ET at Palatka City Dock and Boat Ramp. The weigh-in will be held at Palatka Riverfront Park at 3:15 p.m.