Uribe in Front on Cumberland

BURNSIDE, Ky. (Dec. 3, 2020) – A tournament field of 221 boats – each featuring a pro and a co-angler – began their three-day competition for a top cash award of up to $235,000 at the Toyota Series Championship on Lake Cumberland, in Burnside, Kentucky,Thursday. 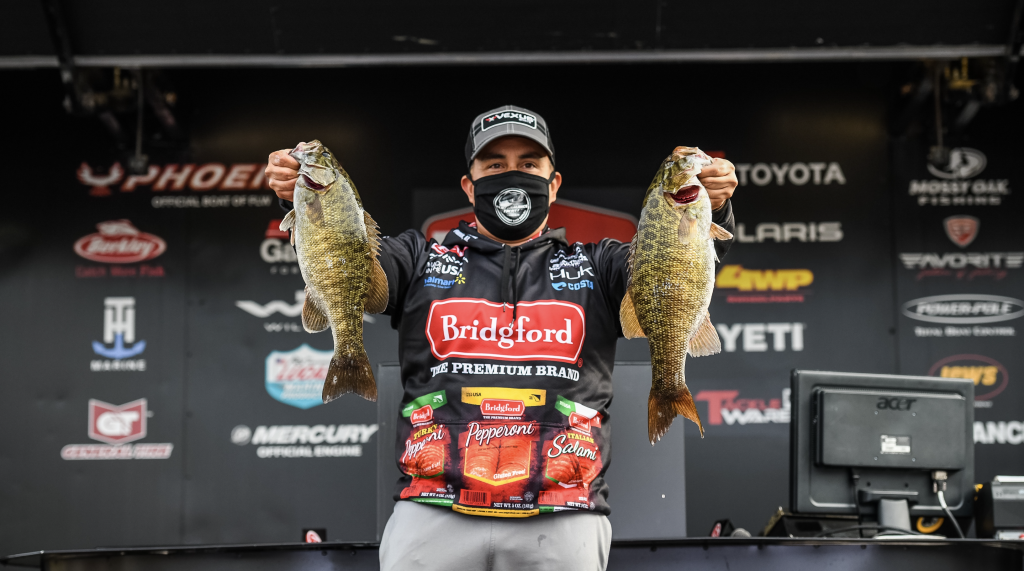 Pro angler Joe Uribe, Jr. of Surprise, Arizona, weighed a five-bass limit totaling 16 pounds, 2 ounces to take the early lead after Day One of the three day event. Uribe now holds a slim 4-ounce lead over pro Nick Ratliff of Vine Grove, Kentucky, who caught five bass weighing 15 pounds, 14 ounces, to end the day in second place. The no-entry fee bass-fishing championship, hosted by the Somerset Tourist & Convention Commission and the Burnside Tourism Commission, features the top 25 pros and top 25 co-anglers from each of the eight Toyota Series divisions and tournament winners, the highest finishing boater and co-angler from each regional at the All-American, the College Fishing National Champions and second-place team, and the top pros and co-anglers from the FLW International Division.

Hailing from the Western Division, Uribe set the pace in the championship Thursday and added another mark to his sterling record, having only finished outside of the top six in the Western Division Angler of the Year points standings twice in the past 10 years. Though success has been lacking at the championships, he’s overdue to show off on a national stage, and a tough lake with smallmouths and rock could be just the fix.

“I’m so glad to be out here – this lake is beautiful,” said Uribe. “We made a long run to our first spot and stuck it out, fishing slow and thorough. I only got six bites all day, but I made them count.”

Uribe credits his lead on Day One to covering large amounts of water.

“I threw moving baits and covered a lot of water. I looked at different pieces on the bank – bank transitions – just something a little bit different. I found a creek in practice that I thought looked really good, with a lot of variations of structure and depth and immediately felt comfortable where I was and fished that area all day.

“I only had two days of practice, but everything just clicked and I started getting bit right away. I literally had one rod on the deck –  I was winding a crankbait, making a lot of casts and continuously moving.”

For a tournament with more than 220 boats on the water, Uribe said his location was relatively quiet.

“There were maybe five boats in the area I was fishing. I’m looking forward to going back out there tomorrow – the weather has been brutal and it’s supposed to rain tomorrow. Hopefully that ends up being a good thing.”

Uribe attributed his success to the fact that he never stops practicing.

“I made a couple stops on the way back and caught a couple. I’m going to practice again tomorrow during the competition and if I’m fortunate enough to make the Top 10, I’ll be practicing again on Saturday.”

The top 20 pros after Day One on Lake Cumberland are:

The top 20 co-anglers after Day One on Lake Cumberland are:

Anglers will take off daily at 7:30 a.m. EST from the General Burnside Island State Park, at 8801 S. Highway 27, in Burnside. Weigh-ins will also be held at the park and will begin at 2:30 p.m. each day. Attendance is limited to competing anglers, family and essential staff. Fans are encouraged to follow the event online through the “FLW Live” weigh-in broadcasts and daily coverage at FLWFishing.com.

The full field of anglers will compete on Days One and Two of the event, with only the top 10 boaters and top 10 co-anglers continuing to the third and final day. The 2020 Toyota Series champions will be determined by the heaviest three-day total weight.