AUSTIN, Texas (May 5, 2021) – In a crazy finish that had bass-fishing fans watching the MLF NOW!® livestream on the edges of their seats, Academy pro Jacob Wheeler of Harrison, Tennessee, held off a late charge from Berkley pro “Big Fish” Bobby Lane of Lakeland, Florida, to win the Major League Fishing (MLF) Bass Pro Tour Berkley Stage Two at Lake Travis Presented by Mercury event in Austin, Texas and the top prize of $100,000. 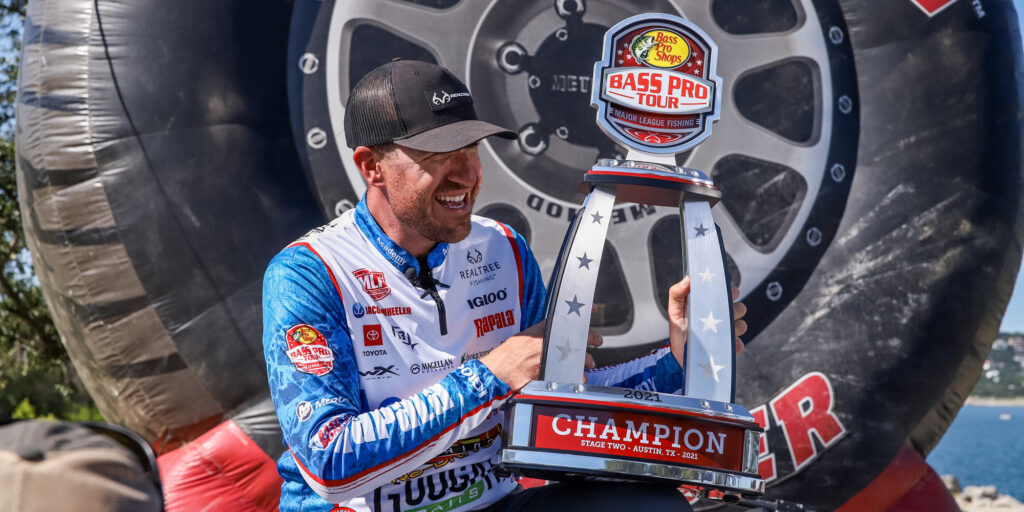 Wheeler caught his last fish of the day at 2:19 p.m., a 2-pound, 2-ounce bass that gave him a total of 13 bass weighing 28 pounds, 13 ounces, and a 9-pound, 4-ounce lead with just under an hour left in competition. Then, Lane caught fire. Lane boated five scorable bass in the last hour to rally to within 2-ounces of the lead with just three minutes remaining in competition. But Lane never caught another fish, and Wheeler walked away with the win by just 2 ounces, a new record for the closest margin of victory in Bass Pro Tour history.

“Wow, that was unbelievable,” said Wheeler, who earned his third career Bass Pro Tour victory – most all-time. “I knew that I was going to have to have a good first and second period, and I just didn’t know how long I could prolong it. I grinded all day long. I felt like the best chance that I had was just to keep a topwater bait and a vibrating jig in my hand, so I threw those all day long and just fished for big ones. I never got a real big bite today, but I got more bites today and it was enough.”

“The big key with the docks was that there was only a certain zone of the lake that had a little bit of dirtier water. The water clarity was the key more so than anything,” Wheeler said. “I couldn’t catch them on the flatter docks, it needed to have a channel bank or deeper bank adjacent to it. If it didn’t have 10 feet of water or more, I wouldn’t get a bite.

“The little ones would stay on the outskirts,” Wheeler continued. “I realized the big ones were in the top five feet of the water column and that was the key with the vibrating jig.”

Wheeler said that he threw a ½-ounce vibrating jig and caught them on four different colors. He fished it on his own Signature Series Duckett Jacob Wheeler Casting rod with a Duckett Paradigm Jacob Wheeler Baitcasting reel, using 20-pound Sufix Advance Fluorocarbon line.

“I fished hard today, stuck with it, had a positive attitude and kept my confidence,” Lane said in his post-game interview. “I love Lake Travis, and I love the way I was catching them today. But congratulations to Jacob Wheeler, he out-fished me today and he earned it. Two ounces shy, it just wasn’t meant to be this week. It’s been a great start to the Bass Pro Tour for me this year and I couldn’t be more excited. I’m ready to go for the Harris Chain.”

Overall, there were 90 bass weighing 194 pounds, 6 ounces caught by the final 10 pros Wednesday.

Browning won Wednesday’s $1,000 Berkley Big Bass Award, weighing in a 4-pound, 9-ounce largemouth that bit his bladed swim jig in Period 2. Fletcher Shryock of Guntersville, Alabama, won the $3,000 Berkley Big Bass award for the largest bass of the event with his 8-pound, 4-ounce bass that he weighed in on Day 2 of competition.
The MLF Bass Pro Tour Berkley Stage Two at Lake Travis Presented by Mercury was hosted by the Austin Sports Commission. The six-day event featured 80 of the top professional anglers from around the world competing for a purse of $805,000, including a top cash prize of $100,000 to the winner.

The 2021 Bass Pro Tour features a field of 76 of the top professional anglers in the world – joined at each event by 4 pros that qualify from the Tackle Warehouse Pro Circuit – competing across seven regular-season tournaments around the country, competing for millions of dollars and valuable points to qualify for the annual Heavy Hitters all-star event and the REDCREST 2022 championship. The next event for Bass Pro Tour anglers will be the Favorite Fishing Stage Three Presented by Bass Cat Boats, held May 21-26 at the Harris Chain of Lakes in Leesburg, Florida.