LEESBURG, Fla. (May 22, 2021) – After a back-and-forth battle at the top of the leaderboard during Period 1, Berkley pro Bobby Lane of Lakeland, Florida, surged ahead in Period 2 of the Major League Fishing (MLF) Bass Pro Tour Favorite Fishing Stage Three at the Harris Chain Presented by Bass Cat Boats event in Leesburg, Florida. Lane caught a total of 25 bass on Saturday – including a pair of 6-pounders and several 4-pounders – to lead Qualifying Group B with 68 pounds, 4 ounces. 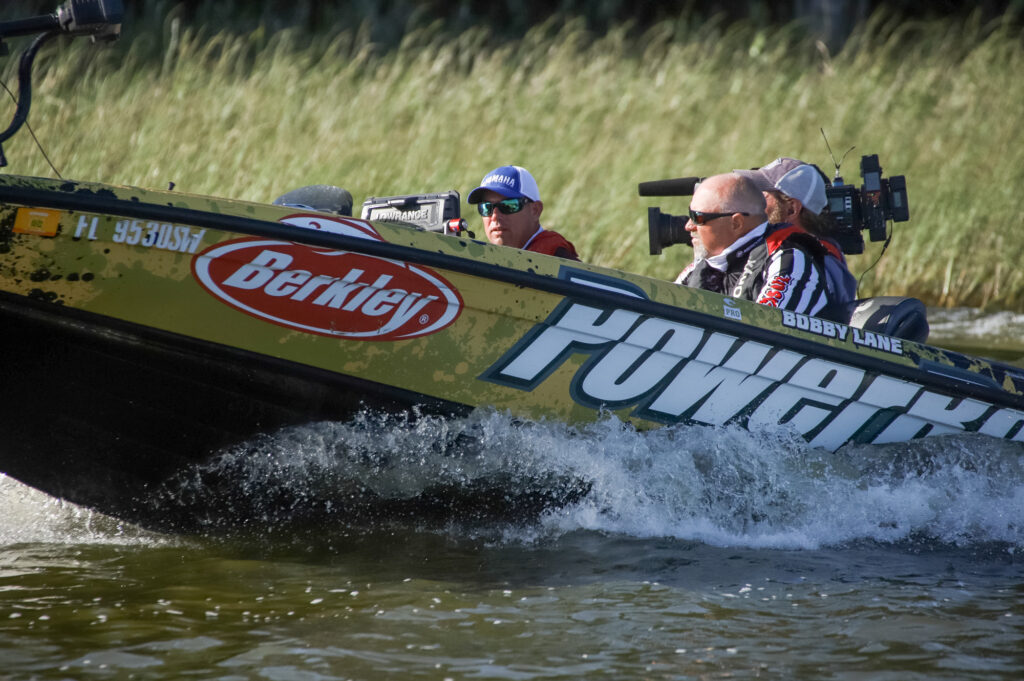 The 40 anglers in Group B will have the day off on Sunday, while the 40 anglers in Group A will complete their two-day Qualifying Round of competition. Group B will conclude their Qualifying Round on Monday. The six-day event, hosted by Lake County, features 80 of the top professional anglers from around the world competing for a purse of $805,000, including a top cash prize of $100,000 to the winner.

Ending Period 1 in second place behind Poche, Lane caught a 4-pounder in the middle of Period 2 that moved him to the top of the leaderboard – and he never looked back.

“Today was a lot of hooksets and a lot of fun,” said Lane, 2016 Challenge Cup Champion on the Harris Chain of Lakes. “The wind was my friend and I basically had the whole entire South side of Lake Harris to myself.”

Lane, who never went more than an hour without padding his lead with a scoreable bass, said he caught almost all his fish flipping a Berkley PowerBait Power Hawg with a ½-ounce weight and a 4/0 Berkley Fusion19 hook along grass lines.

“This was one of the best days of flipping I’ve had in a while and the windy conditions were a huge benefit today,” said Lane. “The Berkley Power Hawg is perfect for the grass I’m flipping in and I tied on a Berkley PowerBait MaxScent The General as a back-up when my Power Hawg got hung up.”

Lane said he expects the conditions to change by Monday but he’s excited to have won the first round and to go back out on the water with the security of a 24-pound lead.

“My goal is to get into that Championship Round and I’m going to do whatever I can to make that happen,” said Lane. “If the water is slick and calm like I anticipate, I plan to focus on finding really thick clumps of grass where the fish are hiding in the shade. I may even venture over to the other side of Lake Harris.”

Location didn’t seem to matter much for Walker, who racked up several 4-pounders throughout the day in different areas across the lake.

“The way things were going during that second period had me a little worried, but thankfully I did well in the first and third period,” said Walker. “We’re still in it and we’re doing good – looking forward to getting back out there on Monday.”

The top 20 pros in Qualifying Group B after Day 1 on the Harris Chain of Lakes are:

Shryock won Saturday’s $1,000 Berkley Big Bass Award, weighing in an 8-pound, 6-ounce largemouth on a creature bait during Period 3. Berkley will award $1,000 to the angler that weighs the biggest bass each day, and a $3,000 bonus to the angler who weighs the largest bass of the tournament.

The 40 Anglers in Group A compete in their two-day qualifying round on Friday and Sunday – the 40 anglers in Group B on Saturday and Monday. After each two-day qualifying round is complete, the anglers that finish in 2nd through 20th place from both groups advance to Tuesday’s Knockout Round, while the the winner of each group advances directly to Wednesday’s Championship Round. In the Knockout Round, weights are zeroed and the remaining 38 anglers compete to finish in the top 8 to advance to the Championship Round. In the final day Championship Round, weights are zeroed and the highest one-day total wins. Full breakdown of the format can be found at MajorLeagueFishing.com.

Anglers will take off from the Venetian Gardens Ski Beach Boat Ramp, located at 201 E. Lake Harris Drive, in Leesburg, at 6:30 a.m. ET each day of competition. Each day’s General Tire Takeout will also be held at the Gardens, beginning at 3:30 p.m. Fans are welcome to attend, but encouraged to follow the event online throughout the day on the MLF NOW!® live stream and SCORETRACKER® coverage at MajorLeagueFishing.com.

Television coverage of the Bass Pro Tour Favorite Fishing Stage Three Presented by Bass Cat Boats at the Harris Chain of Lakes will be showcased across two two-hour episodes, premiering at 7 a.m. ET, Sept. 25 on the Discovery Channel. New MLF episodes premiere each Saturday morning on the Discovery Channel, with additional re-airings on the Outdoor Channel and the Sportsman Channel. Each two-hour long reality-based episode goes in-depth to break down each day of competition.