Major League Fishing pro Matt Lee had the kind of day most anglers dream about to kick off Group A’s Qualifying Round on Lake Champlain for Stage 6 of the Bass Pro Tour. Lee landed 40 scoreable bass, which totaled 103+ pounds and more than doubled the next closest competitor’s weight. 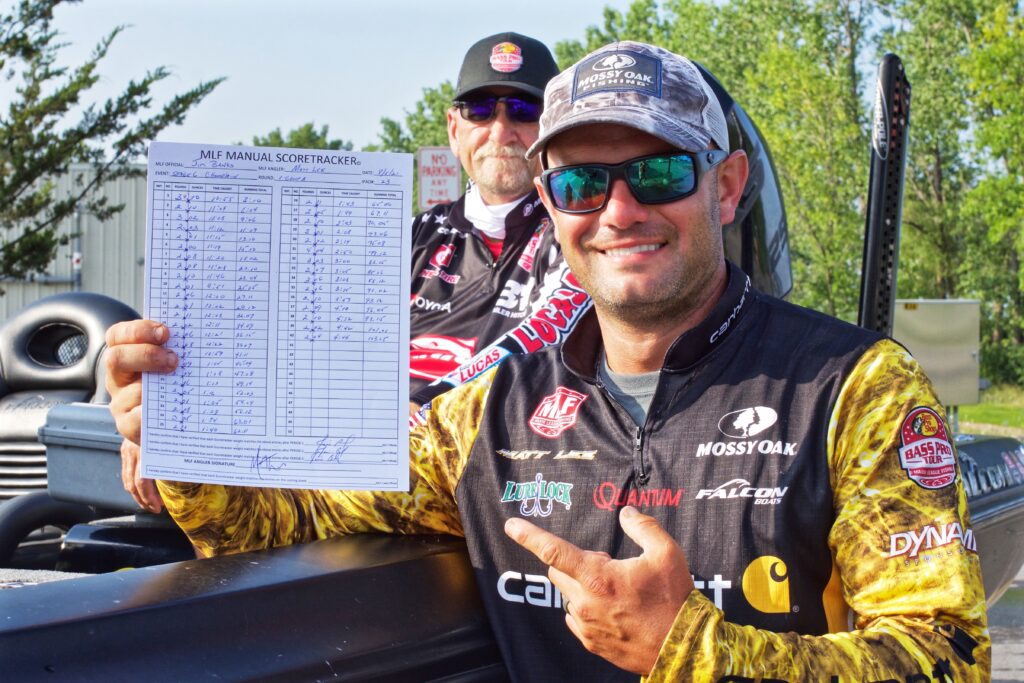 The Carhartt pro was all smiles at the City of Plattsburgh Marina when the day concluded, but said his unbelievable day took a little while to get rolling.

“Lines in was at 9am this morning and I started off targeting smallmouth,” Lee explained. “I didn’t have a bite on my first four stops. We had sunny, slick calm conditions so I decided I’d run to check a few largemouth areas. That’s when the fun started. I landed on an absolute wad of fish and just kept catching them. It was unreal.”

Lee employed two techniques on a pair of Quantum baitcasting setups he swears he didn’t even have tied on to start the morning. He intended to rely on the ravenous smallmouth that live in Lake Champlain and target them mostly with finesse presentations. When that didn’t pan out, he went back to an area he found all the way back in 2014.

“The spot I caught most of my fish on today is actually something I found in an Open in 2014,” Lee said with a laugh. “I checked the area this week in practice, but the wind was howling and I only had three bites. I really didn’t think it’d be all that great, but with the calm conditions we had today I figured I could catch a few off it before going back to chasing smallmouth.”

Well he caught more than a few off this special area, and ended up not leaving for the rest of the day. With the Bass Pro Tour format, Lee decided to lean on the area for all it was worth while the fish were biting. Conditions are supposed to change for Saturday for the culmination of Group A’s Qualifying Round and Lee has learned to “get while the getting is good.”

“I’ve fished this lake a bunch now and it really seems like every single day is different,” Lee said. “We’re supposed to have quite a bit more wind and maybe some clouds on Saturday, so who knows if I’ll even get a bite in that area. I wanted to catch as much as I could catch today. I love this place, but a lot can change in two days.”

Lee has a lot of reasons to love New York. For one, he is leading his Group with a good chance of skipping the Knockout Round and heading straight to the Championship Round for a one-in-ten chance at $100,000.

Add that to the fact Lee has only missed one check in professional level tournaments in the Empire State, actually proposed to his incredible wife Abby here in New York in the summer of 2017, and you start to understand why this Alabama native wouldn’t be ashamed to wear a touristy t-shirt exclaiming, “I <3 New York.”

No matter how Saturday ends up for Matt Lee, his beat up hands will take a week or two to heal and today will be a day he’ll never forget.