PLATTSBURGH, N.Y. (Aug. 9, 2021) – Academy Sports + Outdoors pro Jacob Wheeler of Harrison, Tennessee, caught 32 scorable bass Monday weighing 107 pounds, 2 ounces to win the Knockout Round and advance to the final day of competition at the Major League Fishing (MLF) Bass Pro Tour Toyota Stage Six at Lake Champlain Presented by Googan Baits in Plattsburgh, New York. The final 10 anglers are now set, and competition will resume Tuesday morning with the Championship Round. Weights are zeroed, and the angler that catches the most weight will win the top prize of $100,000. 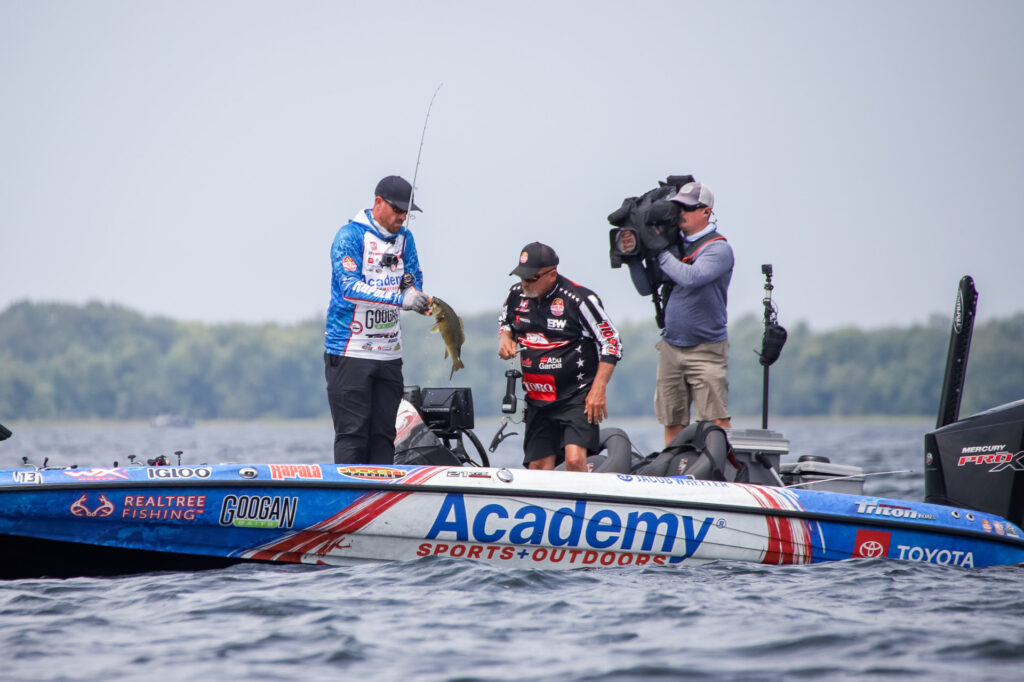 The six-day event, hosted by the Adirondack Coast Visitors Bureau and the City of Plattsburgh, features the top professional anglers from around the world competing for a purse of $805,000, including a top cash prize of $100,000 to the winner.

The top eight pros from Monday’s Knockout Round that will compete in Tuesday’s Championship Round on Lake Champlain are:

They’ll be joined by Qualifying Round winners:

Group A: Matt Lee, Cullman, Ala.
Group B: Justin Lucas, Guntersville, Ala.

“We had a lot of fun today, and caught a lot of bass,” Wheeler said in his post-game interview. “It feels great to reel a whole bunch of bass in. This place is unbelievable. But tomorrow is a new day and we’ve got some stiff competition ahead of us.”

Wheeler said that Monday, for him, was all about the spinning rod. He spent the day drop-shotting on his 7-foot, 2-inch medium-heavy Duckett Jacob Wheeler Signature Series rod, spooled with 8-pound Sufix Advanced Nano braid and a Size No. 2 Finesse Neko hook.

“It’s taken me a little while to dial it in, but I’m starting to understand it more and more, and Champlain is different every single week, every time I come here. I’ve realized you can’t necessarily get locked into one area. I feel like I have figured out a little bit of a pattern and I’m looking forward to getting out there tomorrow to see how it shakes out.”

Rounding out the top 37 finishers were:

Stephen Browning won Sunday’s $1,000 Berkley Big Bass Award with a 5-pound, 4-ounce largemouth that came on a vibrating jig during Period 3. Berkley awards $1,000 to the angler that weighs the biggest bass each day, and a $3,000 bonus to the angler who weighs the largest bass of the tournament.

MLF announced earlier this week that the normal 80-angler Bass Pro Tour field would be reduced to 73 for this event, as seven anglers withdrew from competition for undisclosed reasons. After consulting with the MLF Angler Advisory Board, a slight change was made to the Qualifying Round Toro Cut Lines due to the unbalanced angler groupings.

The 34 Anglers in Group A competed in their two-day qualifying round on Lake Champlain on Thursday and Saturday – the 39 anglers in Group B on Friday and Sunday. After the two-day qualifying round the anglers that finish in 2nd through 17th place from Group A (50% of field) and 2nd through 20th place from Group B (50% of field) advanced to Monday’s Knockout Round. In the Knockout Round, weights were zeroed and the remaining 35 anglers competed to finish in the top 8 to advance to the Championship Round. Tomorrow, in the final day Championship Round, weights are zeroed and the highest one-day total wins the top prize of $100,000.