With the conclusion of the 2009 regular season, the brunt of the qualifying spots for both the 2010 Bassmaster Classic and Bassmaster Elite Series have been determined.

The final Elite event of the regular season, on New York’s Oneida Lake, is the sight where those races were determined, along with Rookie of the Year, but one all-important race remains: The Toyota Tundra Bassmaster Angler of the Year.

That title will be contested, for the first time, in the two-event Bassmaster Elite Series postseason, set for Sept. 10-18 on Alabama’s Lake Jordan and Alabama River. Only the top 12 pros in the AOY standings advanced Sunday and will participate. 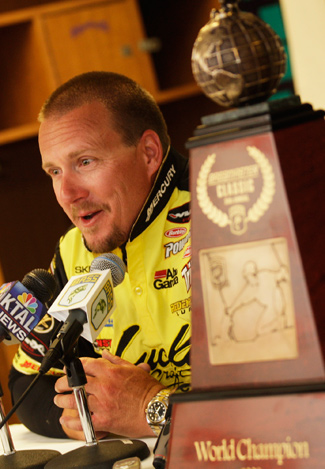 Skeet Reese talks to the press about winning the 2009 Bassmaster Classic.

On Sunday, 37 anglers were able to punch a ticket to the 2010 Bassmaster Classic and 83 received qualifying berths into next year’s Elite Series. BASS qualifies 36 Elite Series pros for the Classic based on their ranking in the Toyota Tundra Bassmaster Angler of the Year race. Because 2009 Classic champion Skeet Reese of Auburn, Calif., automatically qualifies and is presently second in the AOY points, the angler in 37th in the standings also will qualify.

Sliding in at the cut line are first-time Classic participant Terry Butcher of Talala, Okla., Jason Quinn of York, S.C., and Jami Fralick of Martin, S.D., who finished third in the 2009 Classic.

Fralick won a three-way tie with Mark Tucker of St. Louis and Matt Reed of Madisonville, Texas, for 37th place by virtue of pounds and ounces during full-field tournament days.

Thanks to his 10th-place finish at Oneida, Butcher said Sunday what he feels most is relief for having made his first Bassmaster Classic.

“It’s been a very stressful week,” said Butcher, 38. “On the water today I caught them pretty quickly, so I was pretty confident. But then I was still a little nervous because I thought the door was still open for the other guys.

“The Classic has been my ultimate goal since I’ve been fishing. I’m not the kind of guy who shows a lot of emotion, but I’m very excited.”

Butcher said when he arrived at Oneida this past week he believed he had no chance to qualify for the Classic, even if he won the tournament.

“I’ve been here five years and this is the first Classic I’ve made, I’ve always felt left out,” he said. “And now I’ve made it. Plus I get to fish for $500,000, that’s the part I’m really excited about. I’ll probably take a week or two off then start doing some homework.”

Also, for just the second time, the Toyota Women’s Bassmaster Angler of the Year will qualify for the Classic. That berth will be determined after the completion of the Women’s Bassmaster Tour Championship presented by Academy Sports + Outdoors. Alabama pro Kim Bain, a native of Australia, made history in 2009 as the first woman to make the Classic. She finished 47th.

In the case of anglers who qualify through two avenues, BASS will work down through the Elite Series’ AOY standings.

The 83 Elite Series qualifiers set the majority of next year’s field. Joining them will be the top seven points leaders from the Bassmaster Southern, Northern and Central Opens. The winner of the BASS Federation Nation Championship also is invited to the Elite Series, along with the previous three years of Bassmaster Classic champions and Toyota Tundra Bassmaster Angler of the Year winners.

Elite anglers who are in good standing can also qualify by using one of three exemptions: Those with participation in 10 or more Bassmaster Classics, Classic championships or Bassmaster Angler of the Year titles can choose to use one exemption to gain entry into the Elites.

The inaugural Toyota Trucks Championship Week kicks off with the Trophy Chase, set for Sept. 12-13 on Lake Jordan out of Wetumpka, Ala.; the finale, the Evan Williams Bourbon Trophy Triumph, is slated for Sept. 17-18 on the Alabama River from Montgomery.