Calendar year 2022 is nearly half over, 6 of 9 Bassmaster Elite Series events are in the books, John Cox sits second in the Progressive Elite Series Angler of the year race, and yet he still hasn’t caught a bass deeper than 4-feet all year, and does not utilize forward facing sonar. 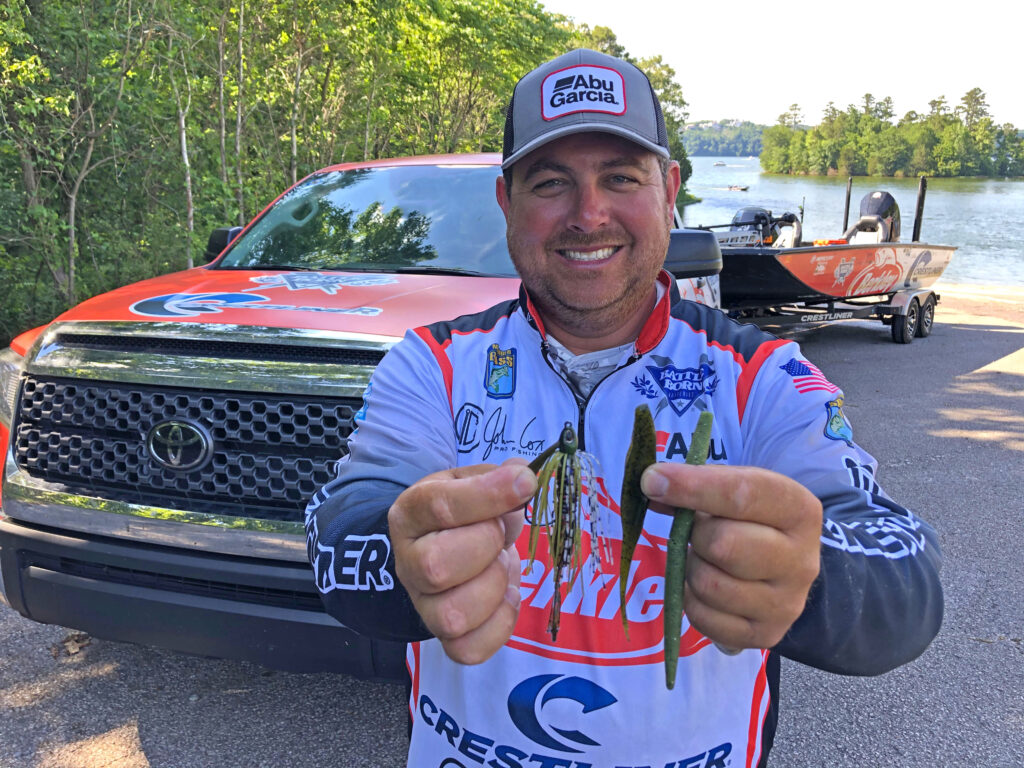 “No, I swear, I can’t think of a single bass I’ve weighed-in all year that I caught deeper than about 4-feet,” chuckled the always happy Florida pro. “And I’ve caught most of those fish on these three lures,” says Cox, holding his three key players up for a fast photo.

Swim Jig – “This bait can be sort of a cleanup hitter a lot of days. I like to throw the ¼ ounce and trim it with a Berkley Shape 108 craw to keep it compact,” says Cox, a longtime Toyota Bonus Bucks participant.

Jerk Shad – “I started throwing a soft jerkbait when I was a kid because my mom and I saw them at the tackle store, and she said I should buy it because it looked like a real baitfish. Still to this day, it’s one of the Top 3 lures I throw. It caught me a lot of fish this year at Santee Cooper and the St. Johns,” he reflects.

Berkley General – “If I’m picking the true season MVP so far, it’s the 5” General. This bait is the reason I get to fish professionally, instead of paving and patching highways like I used to. It’s so versatile that I’ve literally built my pro career on it. I can Wacky rig it, Texas rig it, or Neko rig it – and always have super high confidence that I can catch keepers with it,” says Cox.

Certainly, all three baits match his penchant for staying super shallow, but what about the last three remaining Elite Series events that include two enormous fisheries in the St. Lawrence River and Lake Oahe that are sure to be dominated by drop shots, deeper water, and forward-facing sonar?

“I haven’t used forward facing sonar all year. I rigged it on my boat at St. Clair in 2020 and I could see the fish swimming away from me. That kind of freaked me out, so I stopped using it and actually lead most of that event fishing around seawalls and docks,” smiles Cox. “And last summer on the St. Lawrence I won the opening rounds in an MLF event with 54 bass that totaled 175-pounds, but I caught all those super-shallow too.”

Cox admits it scares him to think about changing his game. And who can blame him? Few pros challenge for more wins than he does, and his seemingly constant place in the Top 10 of Angler of the Year race takes the logic out of leaving the shallows.

To punctuate his approach, perhaps no quote better defines his mindset than when he explains why he chose the three lures you see him holding here.

“I can cover all depth ranges with these three lures. You know, from 0 to 4-feet!” he concluded with sincerity and a laugh.