Our buddy Alan McGuckin shared this story on his Face Book page.This may be the best read of 2019 thus far….. simple but touching.

Nineteen years ago I placed a ‘Ranger Boat for Sale’ ad in the Tulsa World newspaper. Some guy from nearby Sand Springs called to inquire, then came to my home the next night to look at the white model 518SVX.

A few days later, he gave me a check for about 40% of what comparable boats are selling for today.

I sold a boat that night. And I gained an Adopted Dad named Mike Waresback.

“Wares” is uniquely funny, wisdom rich, loyal, and brutally honest to the point some might be offended.

But he’s got a golden heart. He picks his own elderberries to make wine, loads his own bullets, and recently started making redwood furniture.

Now look, all of you know, Ken McGuckin and I are tighter than two layers of transom fiberglass, but he’s 1,025 geographic miles away.

So “Wares” – having a gift for mentoring younger guys – has stood in the gap for 19 years.

Anytime I’ve needed anything from a home cooked meal to a homemade fishing tackle cabinet built, as well as concert tickets, or spare bedroom — whatever a Dad might give his son – well, Wares has been there to give it to me.

Including a ride to the Osage County Courthouse in Pawhuska on Friday morning August 22, 2014.

He looked at me on his porch the night before, and said, “Son, do you need me to go with you tomorrow?”

The answer of course was “yes”.

Without Wares, I’d have likely had nobody on that sunny but dark late summer morning.

Looking back at it – I’ll man up and tell you, I can’t hardly imagine me making that 50-minute commute by myself to raise my right hand in the company of shackled criminals wearing orange jumpsuits.

Thank God “Wares” was there, hiding his own broken heart and tears in the shadows of what was taking place, all in an effort to make sure I wasn’t alone.

Last night on my back porch brought way better times over a bag of blue catfish fillets, cornmeal, cold beers, hot grease, and side dishes from Mac’s BBQ.

Toss in a funny, sweet, God-fearing, leggy blonde, an old grey toed black Labrador, and 50s malt shop music playing on my outdoor speakers to entertain the older folks – and there was plenty of evidence that eventually things get better.

But “Wares” has never hidden from reality. Actually, he’s pretty damn bold about it.

Sometimes calls himself an old man. Says his days on the front deck of a bass boat are challenging. Says a pontoon would suit him better right now.

He also knows of my deep love for our sport, my respect for bass fishing’s history, and him.

So the highlight of last night’s back porch fish fry was a gift from him to me. A wearable keepsake rolled in tons of sentimental goodness like a wet blue catfish fillet tossed into a sack of cornmeal.

A 40-year-old navy blue jacket I’ll display in my rustic home to show the depths of “Wares’” and I’s relationship runs a little deeper than the waters of Salt or Boggy Creek.

Not just any blue jacket. Instead, his “Keystone Bassmasters” jacket covered in embroidered bass fishing accolades from the 1970s and early 1980s.

That’s how it was back then.

Bass anglers wore the brands of sponsors, as well as bass club patches and fishing accomplishments embroidered to jackets, vests, and jumpsuits much like a proud Eagle Scout might.

The Keystone Bassmasters Club was historically rich with as much angling talent as just about any bass club in America – and “Wares” has the patches to prove that for a time, he was one of their best.

Fact is, “Wares” still owns that Ranger boat I sold him 19 years ago.

So who knows, if he buys a pontoon, maybe things will come full circle in the coolest of ways once again.

I love ya, buddy. Alan 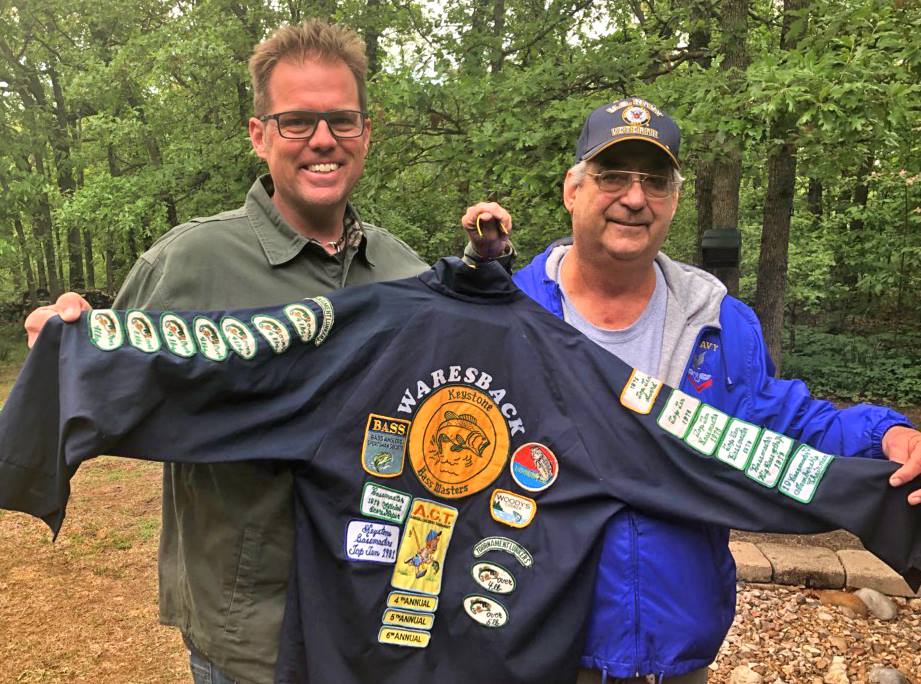