MASSENA, N.Y. (June 25, 2021) – The old saying “records were made to be broken” certainly held true for anglers Friday at the Major League Fishing (MLF) Bass Pro Tour General Tire Stage Five at the St. Lawrence River Presented by Berkley in Massena, New York, as nearly every major Bass Pro Tour record was shattered on an incredible day of fishing. 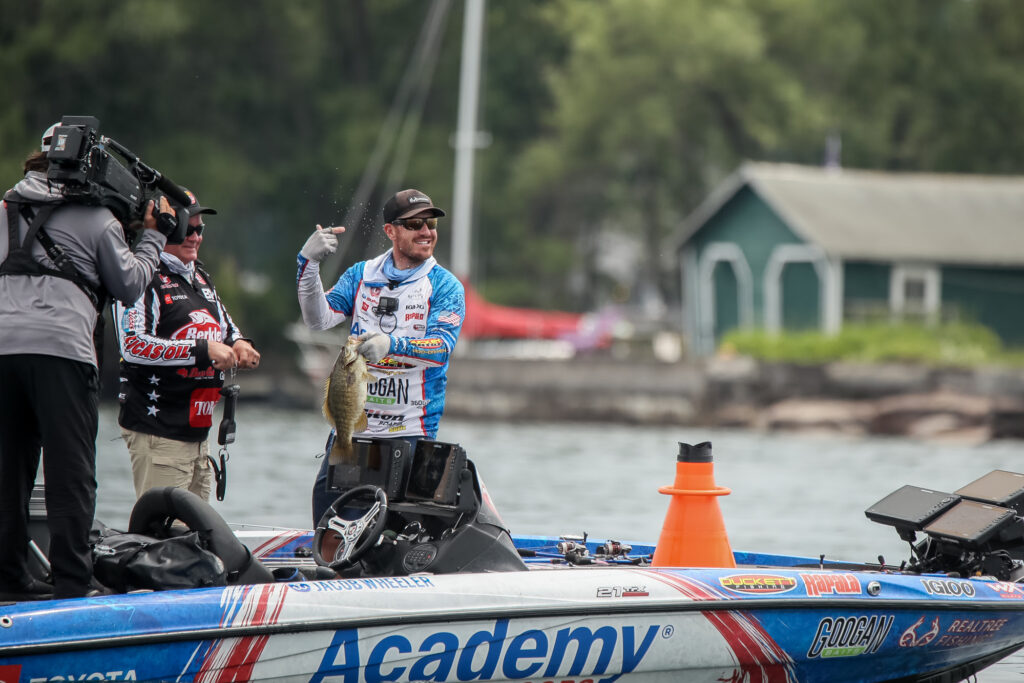 Academy Sports + Outdoors pro Jacob Wheeler of Harrison, Tennessee, grabbed the early lead in Group A, catching 47 bass totaling 165 pounds, 1 ounce – a new Bass Pro Tour record for the heaviest single-day weight. The six-day event, hosted by the Town of Massena and Fish Massena, features 80 of the top professional anglers from around the world competing for a purse of $805,000, including a top cash prize of $100,000 to the winner.

The former record of 141-9 held by Justin Lucas was also broken by the second- and third-place anglers Friday – Alton Jones Jr. of Waco, Texas, caught 49 bass weighing 147-10 to end the day in second place on the SCORETRACKER® leaderboard, and California pro Brent Ehrler caught 43 bass totaling 141-12, good for third.

“Goodness, gracious, what a day of fishing. I can’t even express how unbelievable today was. My knees hurt, my back hurts, I feel like an old guy,” joked the 31-year-old Wheeler. “But the guys right behind me are dang good, and I know that I’m going to have to do that every single day I’m out here. I’m looking forward to getting back out on Sunday, but I’m also glad we get to chill and take a break tomorrow.”

Wheeler’s record-breaking day came down to just a couple of different baits.

“I caught a lot of fish on a pink Ned Bait, and a lot on a (Googan Baits) Blue Penny (Rattlin’ Ned Bait) on a Ned rig,” Wheeler said. “That was pretty much the deal for me, just switching it up between the Rattlin’ Ned and a couple of other different Ned baits. It was pretty typical smallmouth fishing, just not a typical day.”

“That was such a fun day that I will never forget,” Jones said. “I caught 147 pounds and finished the day in second. I don’t even know what to say. Good job to Wheeler. But there is always another day, and I’ll be ready.

“I caught all of my fish on a drop-shot today,” Jones continued. “I used two different baits – the 3.8-inch Gee Crack Bellows Stick and a Gee Crack Revival Shad. I ran waypoint to waypoint and literally relied on my Garmin units. Every single place that I stopped today I had a fish marked on the bed. Some of them were gone, but a lot of them weren’t.”

Like Jones, third-place pro Brent Ehrler did the majority of his damage on a drop-shot rig, but he also added a few fish on a Ned rig.

“I knew the fishing was going to be pretty good, but man, they absolutely caught them today,” Ehrler said. “I caught them on a drop-shot rig, with the bulk of my damage coming on a rod that I designed for Daiwa – the Tatula Elite drop-shot rod – with a Tatula LT reel. I used a Roboworm with an Ark Tungsten weight, 12-pound Sunline Xplasma braided line to an 8-pound Sunline FC Sniper fluorocarbon leader. That’s really standard for me on all spinning outfits and I caught the bulk of them today on that.

“I also caught a few on a Ned rig using the same setup, just with a BOSS Ned head and a Roboworm NED Worm and that was it. I found some good fish in practice and just went back and fished those areas and it paid off today.”

The top 20 pros in Group A after Day 1 on the St. Lawrence River are: