LA CROSSE, Wis. (Aug. 20, 2021) – It was a battle at the top of the unofficial leaderboard for most of the afternoon between pros Adrian Avena of Vineland, New Jersey, Mitch Crane of Columbus Mississippi and Jared McMillan of Clewiston, Florida at the Major League Fishing (MLF) Tackle Warehouse TITLE Presented by Mercury – the Pro Circuit Championship, Presented by Bad Boy Mowers. Fans watching the MLF NOW ! livestream and the anglers themselves were a bundle of nerves throughout the entire two-day Group B Qualifying Round as the trio of anglers stayed within 1½ pounds of each other on the unofficial leaderboard, in a tight race for the top position and the automatic berth to Sunday’s Championship Round. 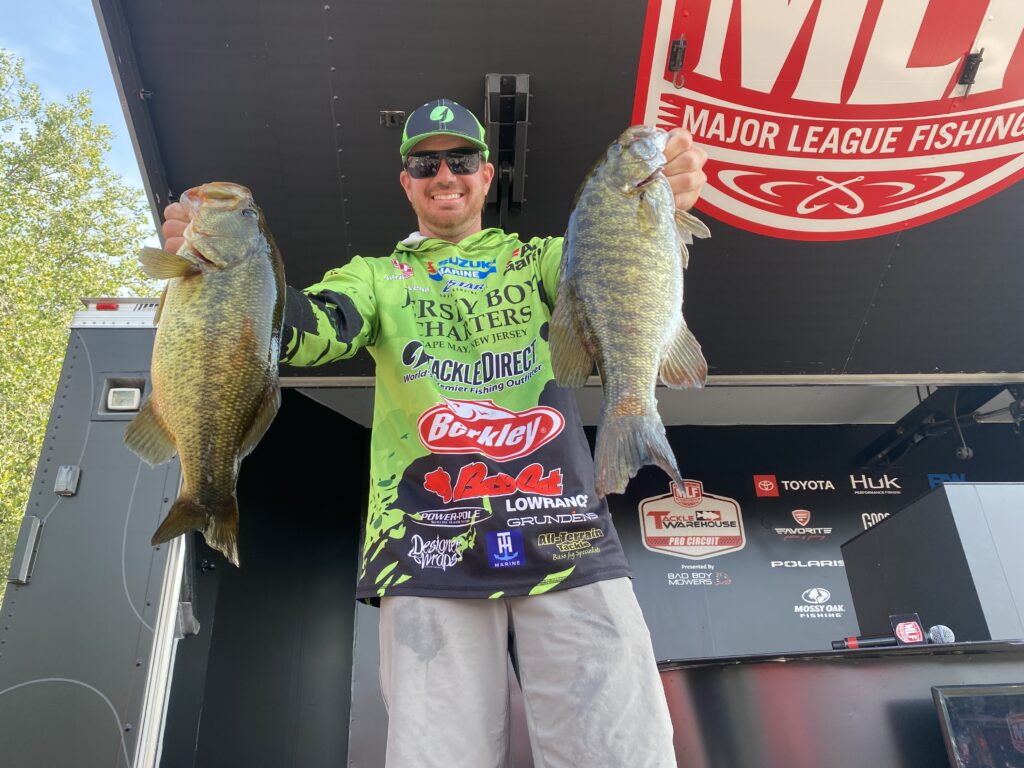 Avena shored up the Group B win at the Friday weigh-in, punching his ticket straight through to the final round with a five-bass limit weighing 13 pounds, 10 ounces, bringing his two-day total to 29-6. His winning bag gave him a 1-pound, 1-ounce advantage over McMillan, who weighed 13 pounds, 6 ounces on Friday, for a total of 28-5, good for second place. After some heart-breaking penalties, Crane brought a limit of 13-6 to the stage for a two-day total of 27-15, ending the day in third.

Group A and Group B Qualifying Round winners will enjoy a day off on Saturday, while the remaining 18 anglers – 9 from Group A and 9 from Group B – will compete Saturday in the Knockout Round. Weights will be zeroed, and anglers will compete to finish in the top eight and advance to Championship Sunday.

The Championship Round on Sunday will feature Group A winner Miles Berghoff, Group B winner Adrian Avena and the top eight anglers from the Knockout Round, competing in a final-day shootout for a top prize of up to $235,000. The six-day event, hosted by Explore La Crosse, showcases the top 48 pros in the 2021 Pro Circuit standings, along with last year’s reigning TITLE champion and reigning Angler of the Year – all competing for a purse of nearly $900,000.

“I had a good day, and this honestly feels like a million dollars because I really didn’t want to fish tomorrow,” Avena admitted. “I’m burning up fish out there, but I’ve still got something in my back pocket that I’m glad I don’t have to burn tomorrow. I have no idea if I’m going to be able to get to it or not, but at least I’m going to do it on Championship Sunday. If I get stuck, I get stuck – if I take off my lower unit, I take off my lower unit – but at least it’s on championship day.”

Avena said he caught approximately 20 keepers on Friday but had a bit of unique pressure in his area.

“There are a couple young kids out where I’m fishing – and I’ve got nothing against them because I’d be out there fishing my heart out too – but I blasted the fish on a topwater that first day,” said Avena. “Today it got to the point where those kids were lined up and were literally throwing a topwater at the same school of fish I’m throwing at. It’s unbelievable, but I somehow got it done.”

As the water levels on the Mighty Miss continue to fall, Avena said he expects the event to get even more difficult over the next two days.

“This river is bittersweet to me. It’s one of those places where I can honestly get spun out a little bit,” admitted Avena. “You guys give us too many options with pools 7, 8 and 9 and I was literally all over the place trying to practice the whole system.

“I’m mostly throwing a swimbait and a topwater,” continued Avena. “I’m mixing in a bunch of other stuff as well. I think I’ve caught one on a fluke and maybe one or two on a jerkbait. I’m fishing schoolers, and it all comes down to making the right casts. I had a couple opportunities and pulled off some 3-pounders today, and I had some other opportunities where I made bad casts.”

As for the pressure from the young enthusiasts in his area, Avena said he is taking it in stride but wouldn’t mind a little intervention.

“I hope their moms and dads or whoever are reading this, man,” Avena said. “These kids – they’re reckless, dude. I’m catching fish out of two little areas, and if I catch one, they all go to that area. If they come up schooling in the other area, the kids all run to that area. There were a few times today where literally four topwaters were landing on the same breaking fish and one of them was mine.

“It’s just one of those deals – I feel like if I could just talk to their parents a bit,” Avena laughed. “Maybe they need to go to church on Sunday. If they can just let me fish it’d be alright.

“Either way, I’m looking forward to getting back out there Sunday. Anything can happen.”

The top 10 pros from Qualifying Group B that now advance to Saturday’s Knockout Round on the Mississippi River are:

Finishing in 11th through 25th in the Group B Qualifying Round were:

Overall, there were 107 bass weighing 256 pounds even caught by the 25 pros on Thursday, with 18 five-bass limits.

Mitch Crane and Dylan Hays tied for Friday’s $500 Berkley Big Bass Award, each bringing in a 4-pound, 3-ounce largemouth and taking home $250. Berkley awards $500 to the angler in each group that weighs the biggest bass over their two-day Qualification Round.

Evan Barnes of Hot Springs, Arkansas was also presented the Forrest L. Wood Sportsmanship and Community Leadership Award during the weigh-in on Friday. The award recognizes a TITLE qualifier, nominated by his peers, who displays an overall commitment to sportsmanship and community leadership, on and off the water, through ethical behavior, integrity, class, selflessness, conservation, volunteerism and kindness to others. Evan’s nomination cited his profound respect for the sport and its ability to connect people from all walks of life and his reflection of a true sportsman who will go above and beyond for others.

The MLF Tackle Warehouse TITLE Presented by Mercury – the Pro Circuit Championship, Presented by Bad Boy Mowers features a hybrid tournament format. All 50 anglers were seeded into two groups of 25 – Group A & Group B, based on points earned in 2021 qualifying events – where they competed in Qualifying Rounds over the first four days of the tournament.

Anglers will take off at 7 a.m. CT Saturday and Sunday from Veterans Freedom Park, located at 1 Clinton Street in La Crosse. Weigh-ins will also be held at the park daily at 3 p.m. The MLF NOW! broadcast team of Chad McKee, Marty Stone and J.T. Kenney will break down the extended action from 7:30 a.m. to 2:30 p.m. daily. Fans are welcome to attend the event or follow the action online through the MLF NOW! live stream and coverage at MajorLeagueFishing.com.