LA CROSSE, Wis. (Aug. 18, 2021) – Berkley pro Adrian Avena of Vineland, New Jersey, brought a five-bass limit to the scale Wednesday weighing 15 pounds, 12 ounces to grab the early lead in Group B after their Day 1 Qualifying Round at the Major League Fishing (MLF) Tackle Warehouse TITLE Presented by Mercury – the Pro Circuit Championship, Presented by Bad Boy Mowers. Avena caught the bulk of his fish early in the day, then culled in the afternoon. He’ll bring a 13-ounce advantage over second place angler Strike King pro Jared McMillan of Clewiston, Florida, who brought a five-bass limit to the stage weighing 14-15. 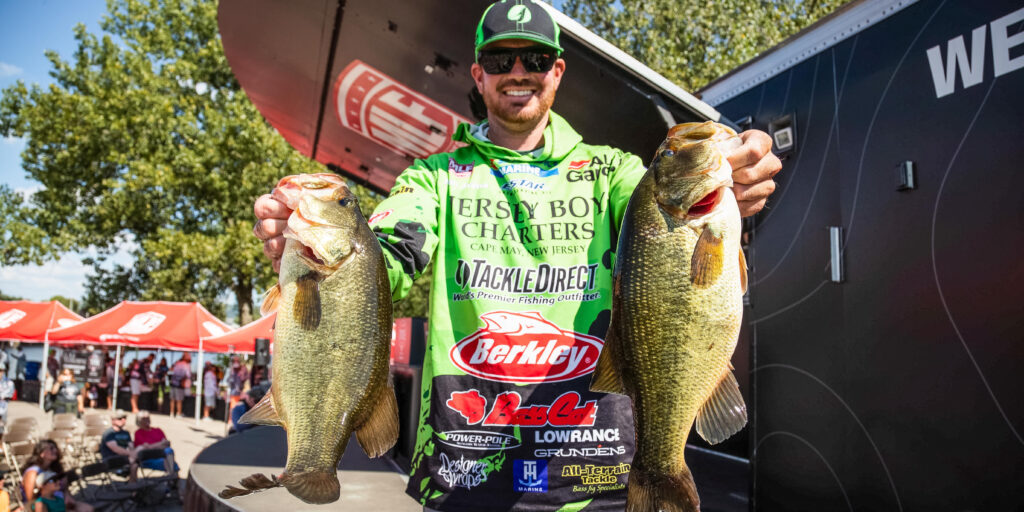 Rounding out the top three was pro Mitch Crane of Columbus, Mississippi, who caught five bass for 14-9 to end the day in third. Four more pros topped the 13-pound mark on Group B’s opening day, putting themselves well within striking distance of making the top-10 cut in their group and moving on to the Knockout Round.

The 25 anglers in Group B will now have a day off on Thursday, while the 25 anglers in Group A will complete their two-day Qualifying Round of competition. Group B will conclude their Qualifying Round on Friday. The six-day event, hosted by Explore La Crosse, showcases the top 48 pros in the 2021 Pro Circuit standings, along with last year’s reigning TITLE champion and reigning Angler of the Year – all competing for a purse of nearly $900,000 and a grand prize of up to $235,000.

“Today was a really fun day of fishing and I was able to catch some quality fish,” said Avena. “I got in an area that had some bass in it and just caught a lot of them.”

The New Jersey pro boated 25 to 30 fish over the course of the day – even more impressive following the morning fog delay, which delayed the start of the competition day by a little over an hour.

“I rolled into this area in practice and had three bites at the end of practice that were all better than average – I call anything over 2½ pounds ‘better than average’ on this system,” said Avena. “I started in that area today and there were still a lot of bass there. Now we wait and see whether I’ll be able to fish that same area come Friday.”

Although he’s a river savvy angler and has fished the Mighty Miss many times, Avena said he was far from comfortable out on the water on Wednesday.

“This river changes so much, between the current, the sand drops and the water level. I’ve never fished it when the system was this low, so it looks like a totally different river to me,” continued Avena. “I’ve always been that guy that likes to get off the map a little bit – and you can do that here – but you also don’t want to overlook the obvious.”

Avena said his goal going into Group B’s second day of fishing is to win the Qualifying Round and advance straight to the Championship Round on Sunday.

“I feel like the area I have can only get better with rest, so I think if I can go out there and catch a really good bag and possibly win the round and punch my ticket into the Championship Round, that’s what I want to do,” said Avena.

The standings for the 25 pros in Group B after Day 2 on the Mississippi River are:

The MLF Tackle Warehouse TITLE Presented by Mercury – the Pro Circuit Championship, Presented by Bad Boy Mowers features a hybrid tournament format. All 50 anglers are seeded into two groups of 25 – Group A & Group B, based on points earned in 2021 qualifying events – where they will compete in Qualifying Rounds over the first four days of the tournament. Group A will fish again on Day 3, and Group B will fish again on Day 4, with total weight determined by the cumulative weight of their biggest five-bass limit from both days.