WADDINGTON, N.Y. — Throughout their careers, the Adrian College team of Griffin Fernandes and Hayden Scott had come just short of achieving a victory on the Bassmaster College Series.

But on a Northern smallmouth fishery that favored their strengths, Scott and Fernandes finally sealed the deal on the biggest of stages, winning the 2021 Carhartt Bassmaster College Series National Championship presented by Bass Pro Shops at the St. Lawrence River. They caught a five-bass limit of 20 pounds, 6 ounces on the final day, increasing their three-day total to 63-10. 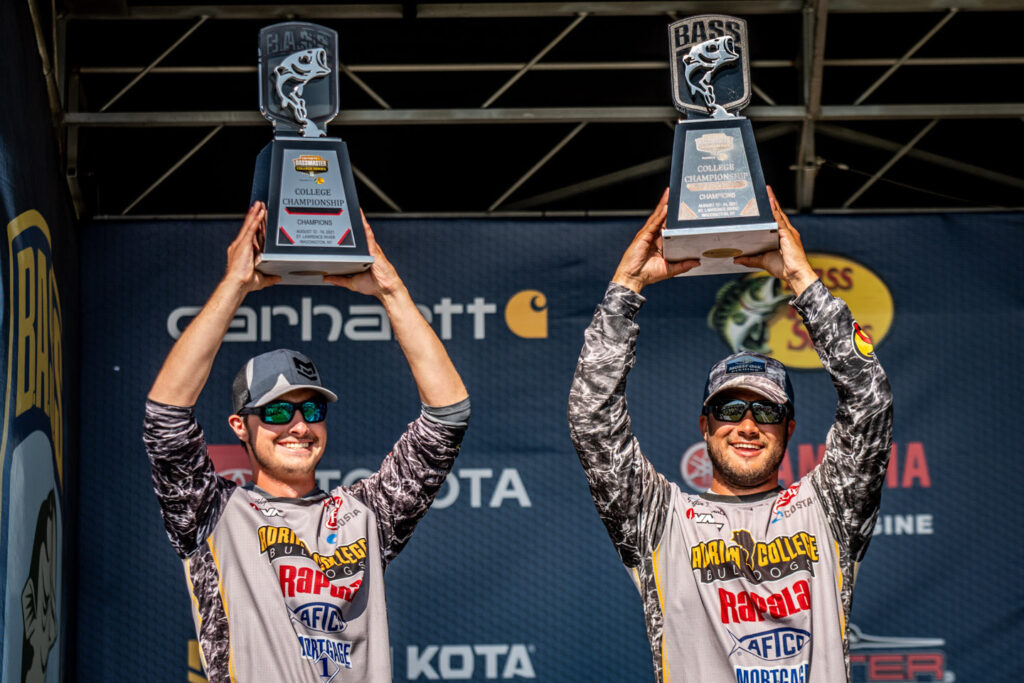 It is the first Bassmaster National Championship trophy for Adrian College, and every team member who made the trip to Waddington stayed to watch their teammates fish and weigh-in.

“The fact that we scraped together what little we had from practice and pulled off a three-day event and got the win on the biggest stage and at the biggest event in college bass fishing, words can’t express that feeling,” Scott said. “We worked our butts off our whole lives and have been working toward this moment and have come close so many times. So, when the dust had settled and we are taking this trophy home … it brings back a lot and it is going to take a few days for it to sink in.”

Scott and Fernandes were one of the most consistent teams in the field, catching 22-14 on Day 1 to land in third place and then jumping into the lead on Day 2 with 20-6. They beat the second-place team of Tristan McCormick and Stevie Mills from Bethel University by over 3 pounds and sealed their spot in the College Classic Bracket, which will be held later this year.

The win caps off a year where Scott and Fernandes finished no worse than 15th in the three College Series events they participated in this season, including a second-place showing at Smith Lake in Alabama.

“This is our first year fishing together and we are die-hard bass fishermen,” Scott said. “We show up to win and we are going to be the first ones on the water and the last ones off.”

Throughout the week, Scott and Fernandes focused on transitional areas around Eel Bay. They said the shallow areas of the bay are where the smallmouth spawned several weeks ago and have started moving towards their summer holes. The channels connecting the bay to the main river had several deep humps where fish were staging in 30 to 50 feet of water, which they rotated between most mornings.

A Poor Boys Tube in Watermelon Gold rigged on a 3/4-ounce Bite Me Tube Head did most of their damage as well as a Berkley Flat Worm rigged on a drop shot with a 5-8/ounce weight.

The smallmouth were pinned to the bottom, so Fernandes said they used a shorter leader to keep the bait closer to the fish, the opposite of what most anglers do. To trigger their bites, the Adrian team threw on top of the humps and worked their baits down to the drop.

Scott and Fernandes started Championship Saturday by catching two keepers, a 2-pounder and one around 4 pounds in the Eel Bay area. They then made a short move to a narrow channel connecting the Bay to the main river area and caught two fish in short order before filling out their limit about 45 minutes later.

They made one cull, but then lost two quality bass they feared would cost them at the scales.

“We thought we had tossed this thing away,” Fernandes said. “We knew these guys were going to catch them and we knew we needed a big bag to get it done. I can’t be more thankful everything ended up working out and I couldn’t be happier with the finish.”

Meanwhile, McCormick and Mills recovered from a disappointing Day 2 and caught 19-13 on the final day to finish in second with 60-7. The Bethel duo led Day 1 with 24-9 and earned Nitro Big Bag of the Tournament honors, but weighed in just 16-1 on the second day to fall to fourth.

“We didn’t really change anything up from yesterday,” McCormick said. “We started on our best place and gave it all the time we had.”

With a solid bag already, McCormick and Mills headed back toward Waddington early and stopped within sight of the ramp after boat problems had them worried they wouldn’t make it back at all. It proved to be the difference.

“After we stopped, we culled four times in 10 minutes,” McCormick said. “The biggest difference for us was staying positive. We had a good bag coming back, but we wouldn’t have gotten second if we hadn’t stopped there.”

A Berkley MaxScent Flat Worm on a drop shot was the big player for Bethel, while a Ned rig did the damage during the final 10 minutes of the tournament.

The Auburn University team of Conner Crosby and James Cobbs had their best day of the tournament on Championship Saturday, landing 21-4 to move from ninth to third and clinch the final spot in the College Classic Bracket.

Crosby and Cobbs found smallmouth on rocky points anywhere from 10 feet all the way down to 40 feet. The smallmouth they found transitioned from day to day, and Cobbs said they had to find which range they were in every day.

“It was really little things that we got a hold of,” Cobbs said. “Each day it seemed like they were moving deeper. They got up on the shallow flat to spawn two to three weeks ago and they are starting to move out to deeper water.

“We’ve followed them out to the edge of the current break.”

The Flat Worm in Mango Magic on a drop shot was the key bait for the Auburn team as well as a Ned rig with a TRD. Crosby added that fizzing and keeping their fish healthy was an important aspect of their tournament.

Tripp Bowman and Blakely Young from Louisiana State University-Shreveport earned Carhartt Big Bass of the tournament honors with a 6-10 smallmouth they caught on Day 1.

The Top 3 teams, along with the Auburn team of Logan Parks and Tucker Smith, will now prepare for the College Classic Bracket, the location of which will be released at a later date.

Parks and Smith earned their spot after winning Team of the Year. The final day of the College Classic Bracket will be broadcast live on FS1.

This week’s tournament was hosted by the Village of Waddington, St. Lawrence County Chamber and Clarkson University. The tournament was also supported by a Market New York grant from I LOVE NY/New York State’s Division of Tourism awarded as part of the Regional Economic Development Council initiative. The tournament and all associated festivities were planned to ensure the safety of athletes, staff and guests.