EUFAULA, Ala. — With several key bites in the afternoon, Rus Snyders took home the victory in the second 2021 Bassmaster B.A.S.S. Nation Kayak Series powered by TourneyX event of the season at Lake Eufaula, catching a five-bass limit that measured 91.5 inches. 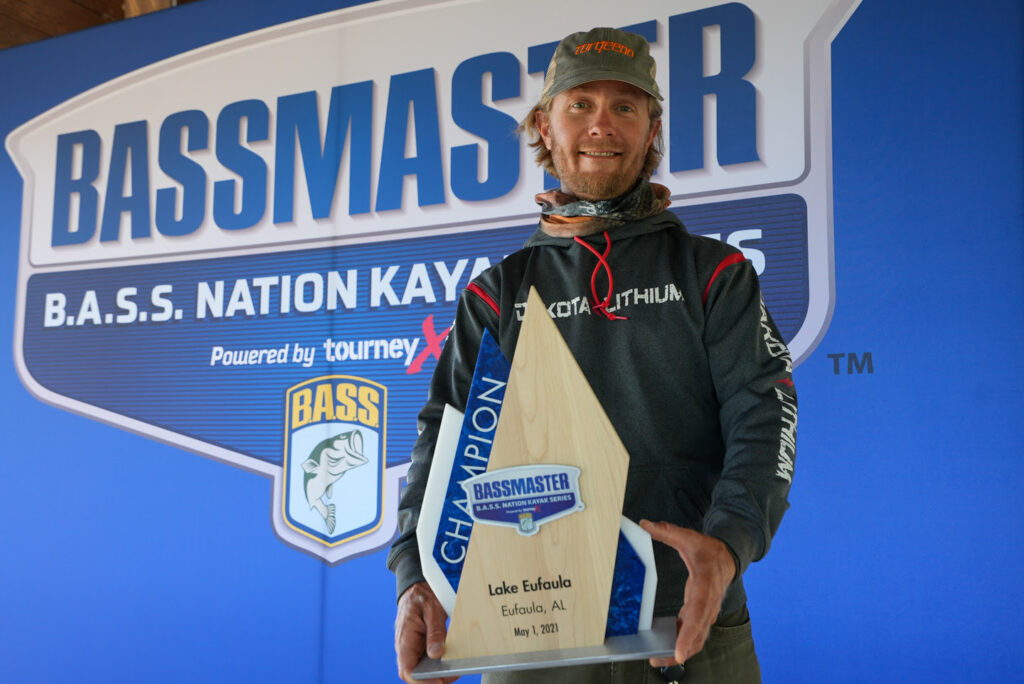 Along with the trophy, Snyders, a Tennessee native, earned $5,500. Texas angler Doug Hill finished second with 89.5 inches, and Dylan Lowery of Georgia was third with 85.25.

“It means a lot,” Snyders said. “It is a lake I’ve never been to before. Eufaula is a legendary lake and I heard so much about it growing up and was really excited that B.A.S.S. was holding this tournament this time of the year. It suits my style, power fishing shallow.”

When he arrived for practice Wednesday, Snyders found an active shad spawn happening and attempted to unlock the bite with a number of baits — but with limited success. That continued during the tournament, as Snyders was only able to catch two small keepers during the shad spawn Saturday.

“I really struggled even after seeing bass bust all over the place,” he said. “Eventually, I left that area and thought I would cover as much water as possible and find some more active fish.”

As his struggles continued around the shad spawn area, Snyders took a look at the standings to see what others were catching and was surprised to see very few fish posted to the leaderboard.

Seeing the lack of activity allowed him to reset his mind and adjust his strategy. Around 9 a.m., Snyders caught his biggest bass of the day, a 20.75, on a Lucky Craft BDS3 crankbait.

“It was barely hooked. It was just by the skin of the lip,” he said. “So, I got very fortunate with that.”

After fishing another stretch of unproductive water, Snyders turned around and went back to where he caught the big bass and caught another 18.25-incher, this time on a black and blue swim jig on a 7-foot-2 medium-heavy iRod Stone Cold Swim Jig rod.

From there, Snyders used his Torqeedo 1103 motor, which he installed Friday on his Wilderness Systems Atak 120, to cover as much water as possible. Around noon, he caught a couple of fish around a group of cypress trees and keyed on that pattern the rest of the day.

“I looked at my map and tried to find all the cypress trees I could,” he said. “Sometimes it would be a few hundred yards or quarter-mile run from one patch to the next. I decided to stick with that pattern and they were eating that black and blue swim jig pretty good for the last couple hours.”

Not only was it his first time fishing Eufaula, but Saturday also marked the first kayak tournament in Hill’s long fishing career. He made the most of it, earning $2,188 and a spot in next year’s national championship.

“This was my first kayak tournament and I came here with one goal, and that was to qualify for the championship,” Hill said. “It means quite a bit. All in all, it was a great day. I’m really pleased with the way it turned out.”

Fishing out of an Old Town kayak, Hill spent his day targeting postspawn bass around grass islands and found success flipping a creature bait to the edge of the grass.

The morning started fast for Hill, catching a 16-inch keeper on a spinnerbait. After missing a couple of bites, he made a move to the islands, switched to the creature bait and landed a 19-incher.

“It was game on from there. A little after 8 a.m. I had a limit,” Hill said. “Next thing I knew I was in the lead. I played chase with the gators the rest of the day. I lost three really good fish and another smaller fish and, to win a tournament you can’t lose fish.”

The boater traffic around his area also muddied up his water, making it harder for Hill to get a bite.

Knowing a lot of anglers would be targeting the shad spawn, Lowery, who grew up on Lake Eufaula, decided to fish a backwater pond he had only been in twice in his life. The bass there were guarding fry and he was able to coax them into biting a swim jig paired with a Big Bite Baits Kamikaze Swimon trailer on a 7-foot-6 heavy-moderate action Impulse rod.

He caught most of his bass in the first two hours.

“I was burning it over the lily pads and killing it on the edge and they would eat it as it was falling,” Lowery said. “I caught two in the creek on the way out of that backwater pond on a ChatterBait and then made a cull with 15 minutes to go on a swim jig on the main river.”

Nick Dyer earned $500 for catching the big bass of the day, a 24-inch largemouth.

The Top 10 anglers from this event earned a place in the 2022 B.A.S.S. Nation Kayak National Championship. More details on that event will be released at a later date.

The tournament was hosted by the Eufaula Barbour Chamber of Commerce.