HOT SPRINGS, Ark. (Aug. 10, 2018) – The world’s best bass anglers launched on Lake Ouachita in Hot Springs, Arkansas, Friday to kick off the 2018 Forrest Wood Cup, the world championship of professional bass fishing. The three-day event, which awards a $300,000 top prize to the winner, featured a full field of 56 anglers competing today and Saturday before being cut to the final 10 on Championship Sunday. 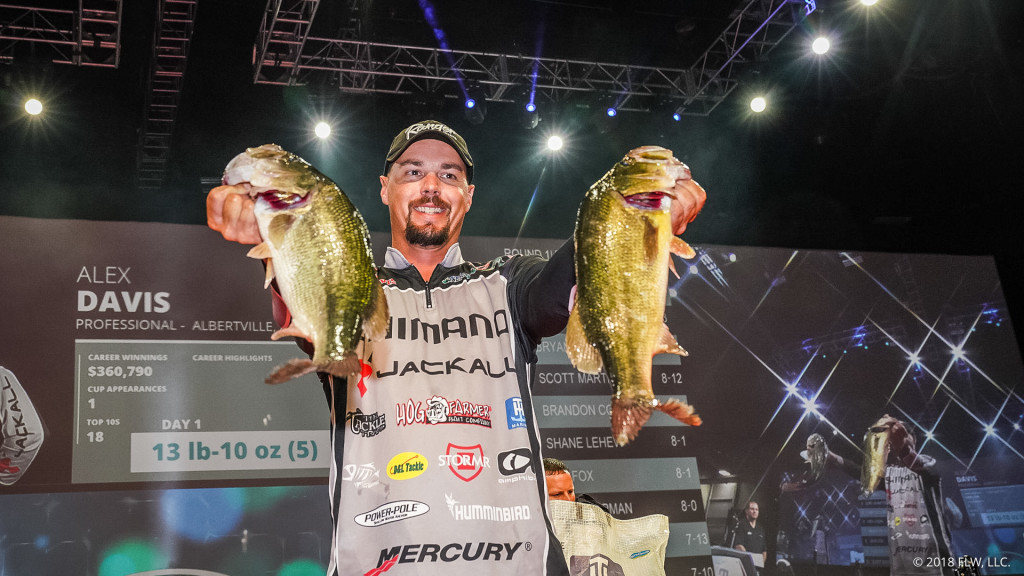 “Today was one of, if not the, most challenging day mentally that I’ve ever had in my career,” said Davis, who has four previous top-10 finishes in FLW Tour competition. “At noon today I had one fish in the livewell that weighed 1 pound. I had missed seven blowups on my topwater bait and I lost three bites fishing a worm. My best place that I thought I had I only caught one fish. Luckily, things turned around for me this afternoon.

“I moved out of my ‘best’ area and fished some new water and managed to catch three, which put me at four fish. On the way back to check in I decided to stop at the one brush pile that I knew of that was close to the ramp. I literally pulled up, made one cast, hooked my last keeper, got him in the boat and said ‘let’s go’. It was either my biggest or second-biggest fish of the day.”

Davis said he caught his fish Friday on three different baits, specifically mentioning a drop-shot rig and a Zara Spook, but declining to mention his third bait that he said was ‘different’.

“I thought I had 11 pounds, so when Chris Jones said I was the new leader I was blown away,” Davis said. “This lake is not a specific spot or specific cast kind of deal. It’s about being in the right place at the right time and hoping the stars line up.

“I was nervous this morning due to the Cup atmosphere, but I settled down once I got out fishing,” Davis went on to say. “I’m going to try my best to not think about being in the lead. I know it’s crazy to say, but if I think about it I’ll drive myself crazy. Tomorrow I’m going fishing, just like I did today. If I can catch one or two good ones, it will really go a long way.”

The top 20 pros after Day One on Lake Ouachita are:

Anglers will take off from Brady Mountain Resort & Marina, located at 4120 Brady Mountain Road in Royal, Arkansas, at 7 a.m. CDT each morning. Each day’s weigh-in will be held at the Bank OZK Arena located at 134 Convention Blvd., in Hot Springs, beginning at 5 p.m.

Fans will be treated to the FLW Expo at the Hot Springs Convention Center located at 134 Convention Blvd., in Hot Springs, each day from 10 a.m. to 4:30 p.m. prior to the weigh-ins. The Expo includes games, activities and giveaways provided by more than 40 FLW sponsors, the opportunity to shop the latest tackle and outdoor gear from more than 100 exhibitors, Ranger boat simulators, a casting pond and a trout pond for children, as well as the opportunity to meet and interact with top professional anglers, including Hank Parker, Jimmy Houston, and Larry Nixon. FLW’s namesake Forrest L. Wood, the legendary founder of Ranger Boats, will also be greeting fans.

On Saturday and Sunday the first 250 children 14 and under each day who are accompanied by an adult will receive a voucher to redeem for a free rod-and-reel combo after the evening’s weigh-in from Shakespeare rods. Also on Sunday, one lucky fishing fan will win a brand new Ranger Z521L bass boat with a 250-horsepower Evinrude or Mercury outboard motor. The Ranger Boat giveaway is free to enter but the winner must be present at the conclusion of Sunday’s final weigh-in to win.

Also on Saturday and Sunday, FLW fans will be treated to the Bass & BBQ Festival in conjunction with the FLW Expo. FLW has partnered with local BBQ vendors to feature award-winning BBQ teams offering delicious fare to visitors at the Forrest Wood Cup Expo. A portion of all proceeds will be donated to local Arkansas charities.

Country music superstar Justin Moore will perform a free concert on the weigh-in stage at the Bank OZK Arena on Sunday, Aug. 12, starting at 4 p.m., prior to the final weigh-in. The concert is presented by Realtree and KSSN 96. Moore will be performing songs from his latest album, Kinda Don’t Care, to fishing fans in Arkansas as well as live-streamed to fans around the globe at FLWFishing.com.

The Morning Takeoff, FLW Expo, Bass & BBQ event, live concert and weigh-ins are all free and open to the public.

Television coverage of the 2018 Forrest Wood Cup will premiere in high-definition (HD) on NBC Sports Network (NBCSN) Sept. 27 from Noon -1 p.m. EDT. The Emmy-nominated “FLW” television show airs on NBCSN, the Pursuit Channel and the World Fishing Network and is broadcast to more than 564 million households worldwide, making it the most widely distributed weekly outdoors-sports television show in the world.

FLW is the world’s largest tournament-fishing organization, providing anglers of all skill levels the opportunity to compete for millions in prize money in 2018 across five tournament circuits. Headquartered in Benton, Kentucky, with offices in Minneapolis, FLW and their partners conduct 286 bass-fishing tournaments annually around the world, including the United States, Canada, China, Italy, South Korea, Mexico, Portugal, South Africa and Spain. FLW tournament fishing can be seen on the Emmy-nominated “FLW” television show, broadcast to more than 564 million households worldwide, while FLW Bass Fishing magazine delivers cutting-edge tips from top pros. For more information visit FLWFishing.com and follow FLW at Facebook, Twitter, Instagram, YouTube and Snapchat.