Matt Arey feels unprepared if he doesn’t shoot at least 100 arrows with his compound bow every August to get ready for North Carolina’s opening day of archery season in early September. 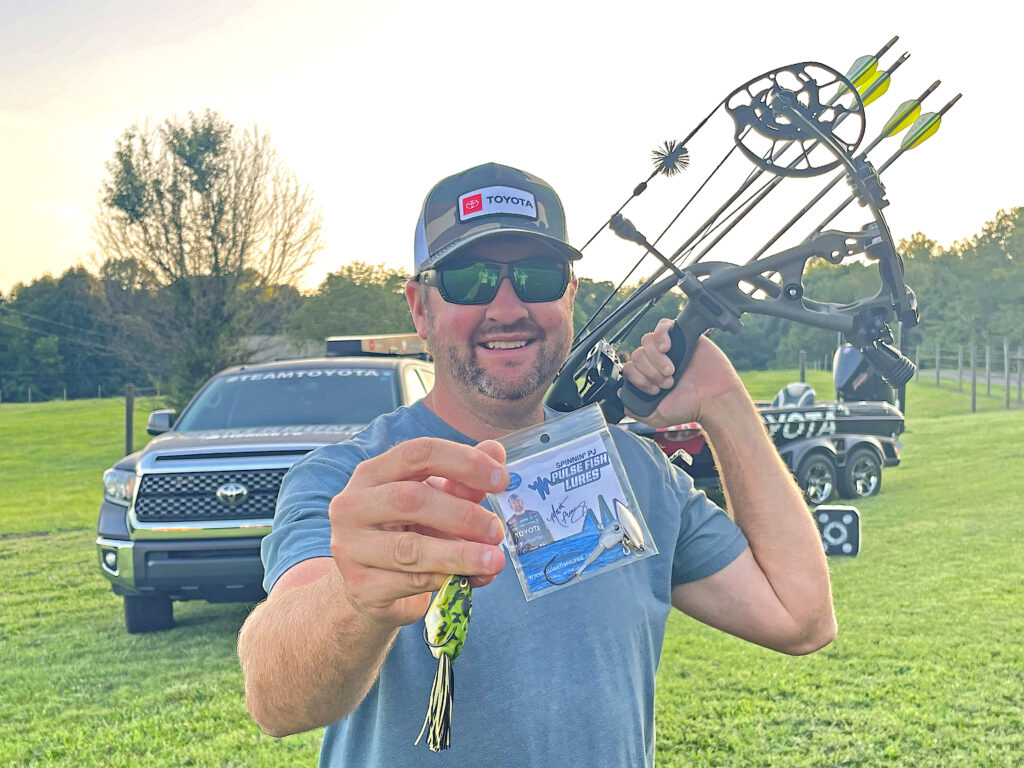 Likewise, if he doesn’t have at least two prominent strategies in his quiver for the often-challenging days on the water in August, he fills at risk for missing the target on late summer’s quirky largemouth and spotted bass.

“I actually just bought a new bow for the first time in six years. It’s a Hoyt RX-5. And with a brand-new bow, I don’t even begin to truly sight it in until I’ve shot at least 200 arrows through it to stretch the strings. So yes, I’m shooting a ton right now,” says Arey.

“Unlike the spawn, post spawn, or late fall when bass get in predictable places and do predictable things, August is kind of a weird time in the bass fishing universe. So, I focus on both a shallow pattern and a deeper pattern,” says the Team Toyota pro.

“I like to start the day in August up shallow with a Lunkerhunt Compact Frog around the shady undercut banks, overhanging limbs, or the shade lines around fairly shallow boat docks where sunfish hangout and become food for bass,” he says.

Arey says he’s yet to actually see a bass eat a frog. Although, he did see one crush a baby duckling one time, and we all know frogs, ducklings and bluegills are part of a largemouth’s shallow water summer smorgasbord.

“A topwater frog tied to 50-pound P-Line braid is a just a great tool for skipping and casting around the shallow shady places where largemouth like to find food at this time of year. And it seems to get bites from the biggest bass — that’s the part I like most,” grins Arey.

“Oh, and by the way, that momma duck went bananas the second she knew that largemouth ate her baby. I’ll never forget watching that whole scene. It was nuts!” he remembers.

With water temps as high as they’ll get all year, logically, it’s natural to think ‘deep’ in August. But deep is a relative term, and often times the thermocline that is well established right now can be as shallow as 15 or 18 feet. So often times there’s no need to look in the oxygen deprived depths beyond that range.

“I like brushpiles that top-out at 10 to 15 feet in August,” says Arey. “The natural approach is to sling a big Texas rigged worm around, but when you do that you’re really hunting those solitary big fish that may or may not bite. That’s kind of a high-risk/high-reward approach,” says Arey.

“So for a more consistent bite in August, I like to throw a 3/8-ounce Pulse Fish Spinnin’ PJ with a 3” trailer on it to catch the way more plentiful number of bass that are suspended around brush, but not necessarily buried in the heart of it, and they’re generally looking to ambush shad,” he adds.

The Pulse Fish Spinnin’ PJ features a fast-penetrating 3/0 lightwire hook, a high quality Spro barrel swivel, and perhaps most important, a carefully designed spacer wire that assures the blade spins constantly. He ties it to 10 or 12-pound P-Line fluorocarbon on a baitcaster, and pairs it with a fairly soft tipped Lew’s 7’ casting rod.

In order to keep it from snagging in the brush, Arey uses the ‘countdown’ method to reach the depth he knows to be just above the brush without getting tangled in it.

“Lowrance’s ActiveTarget™ makes seeing both brush and fish way easier, but I caught a ton of bass suspended over brush way before forward-looking sonar came around,” he remembers.

“As long as you know where the brush is, you’re in the game with this pattern. If you don’t have ActiveTarget, pick-out a tree, dock, or light pole on the shoreline to line up your cast. Then cast beyond the brush, count down your Spinnin’ PJ, and retrieve it with a series of stop, starts, and slightly erratic behavior over top the brush,” explains Arey.

There’s certainly nothing erratic about Arey’s on the water performance. He’s cashed a check in an astonishing 29 of the 32 B.A.S.S. events he’s fished – that’s a mind-bending 90% success rate.

And if he keeps flinging dozens of arrows though his new Hoyt bow, they’ll be no chance for inconsistency in his archery game when the whitetail season begins either.