Garmin pro Todd Auten hadn’t competed in a Bassmaster Classic since February of 2008, so he went ahead and made his presence known at the 50th Annual Academy Sports + Outdoors Classic presented by Huk last weekend on Lake Guntersville. Auten rallied to finish in second place behind Hank Cherry thanks to a 20-pound 10-ounce limit of fish on Championship Sunday. 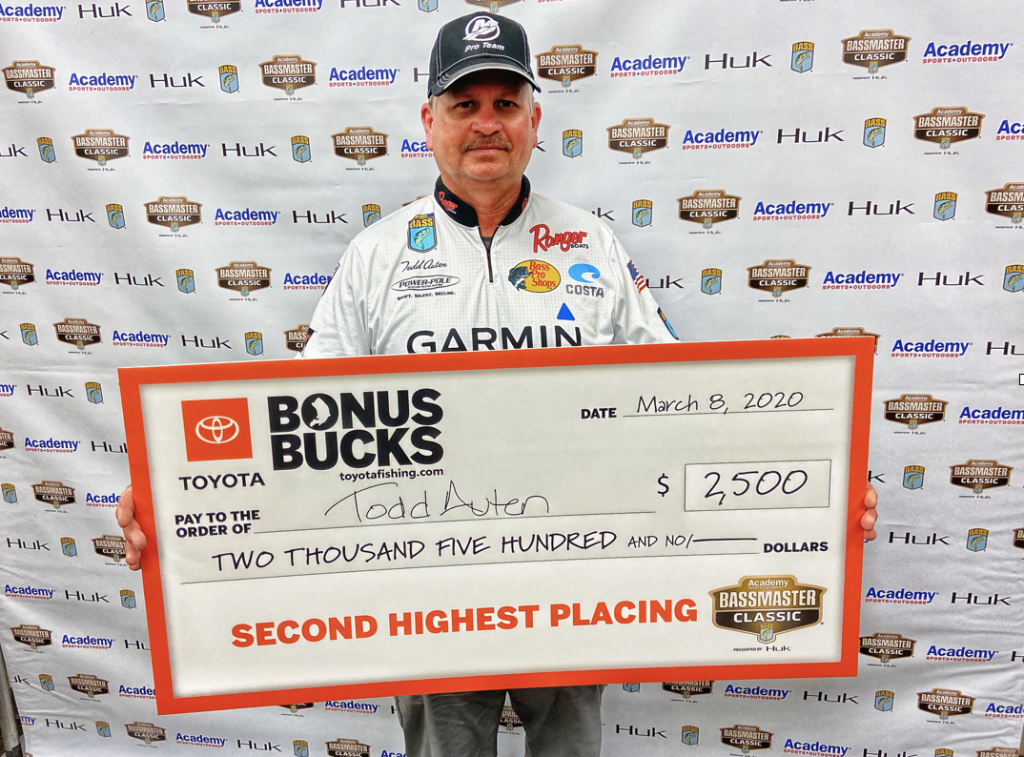 Finishing second in a major event like the Classic has its own special sting to it, but Auten admitted the disappointment was lessened when he saw Kendell of Dynamic Sponsorships holding his $2,500 “Happy Gilmore” Toyota Bonus Bucks check during the post-Classic press conference for finishing as the second highest placing participant.
The Lake Wylie, South Carolina pro has been a Toyota Bonus Bucks member since his last Classic appearance over 12 years ago and in that time has racked up a pile of money through the popular contingency program.

“I absolutely love towing with a Toyota Tundra,” Auten said humbly. “To me, they are the most dependable trucks on the market and I simply don’t have to worry about them. I have owned several and leased my last two Tundras; I have had fewer issues with these vehicles than anything else I’ve ever owned.”

Both first and second place finishers in this year’s Bassmaster Classic drive a Toyota and were awarded extra earnings, but Auten reminds us that an angler can lease an eligible Toyota tow-vehicle and still qualify for the Bonus Bucks program. As long as the vehicle is 2016 or newer, is owned or leased under your name, you compete in one of the myriad of supported tournaments and are among the highest placing participants you can earn Bonus Bucks.
For more information on the program, including a full list of events or to get yourself registered, follow this link: https://www.toyotatrucksbonusbucks.com/ . Or call (918) 742-6424, ask for Kendell or Chip and they’ll get you taken care of.