In addition to several folks asking Caleb Sumrall why he was carrying around a tennis ball, concerns about catching a limit of bass from Neely Henry’s flooded muddy waters were running high Friday morning, minutes prior to the start of competition at the Whataburger Bassmaster Elite. 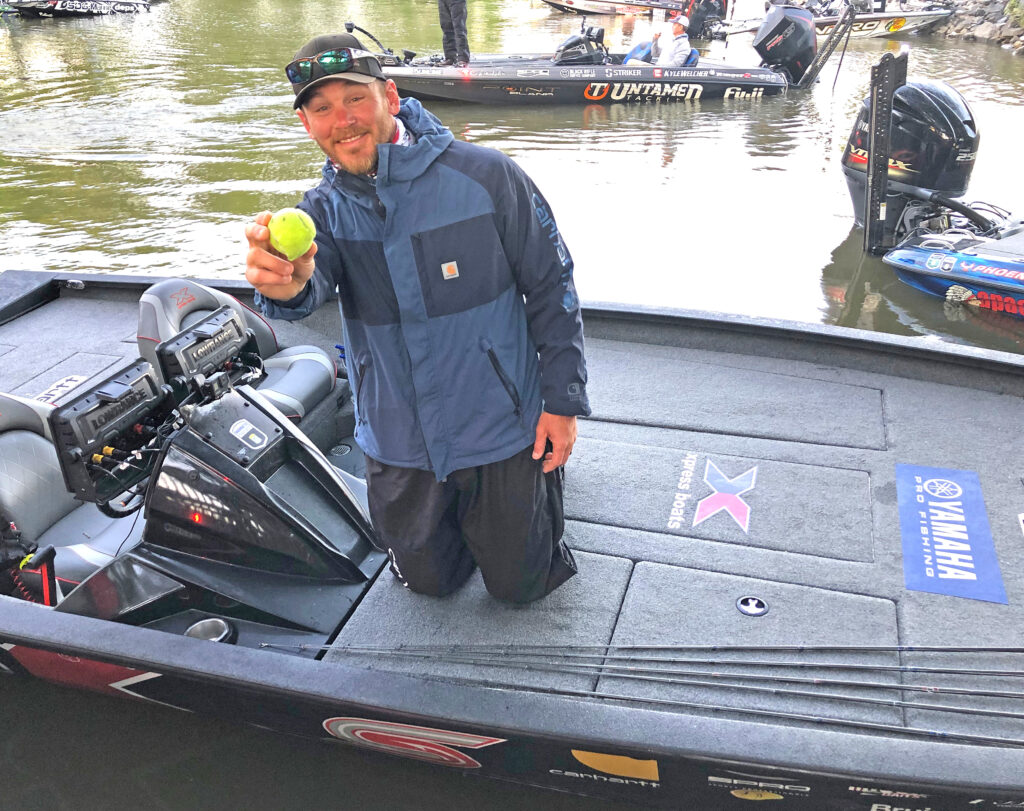 “I’ll bet I’ve had five people ask me why I have a tennis ball in the cupholder of my Xpress this week – from service yard mechanics to fans at the boat ramp, and PR and media dudes too, everybody wants to know about the tennis ball,” grinned Sumrall.

The answer is simple. The former oil field supply yard worker spliced a tennis ball he borrowed from the family’s silver Labrador “Sky” and uses it to cover the hard-angled bracket of his sonar unit when he covers his boat, to avoid tearing the boat cover.

That was an easy fix. What’s not so simple is catching a bass from Neely Henry’s high and muddy waters. And even more concerning is catching them consistently to avoid bouncing around in the standings like a tennis ball.

“I caught 14 pounds to lead Day 1 at the Bassmaster Open here last fall, but then only had 8-pounds on Day 2,” recalled Gleason. “Consistency is super tough to achieve here.”

To which Mosley added, “My dad and I had a 20-pound limit here in the Spring of 2015, and that was only good enough for 5th place. But this week I feel like Neely will be tougher to get a bite and stay consistent than the Sabine River,” says Mosley who finished 2nd at the Sabine Elite last month.

So while Sumrall has never played tennis in his life, admitting the only sport he played in high school was golf, the goal at Neely Henry this week is to give a Roger Federer like effort to avoid bouncing the wrong direction in the Bassmaster Angler of the Year standings where he currently sits a very respectable 11th.