B. Lester: 2 Tips for Fishing the Fall “Cheese”

The formation of thick yellow matts of algae atop hydrilla, coontail, and milfoil beds each autumn is often comically called “cheese” by anglers. And it becomes as much a part of October for some bass anglers as treestand locations and college football rivalries. 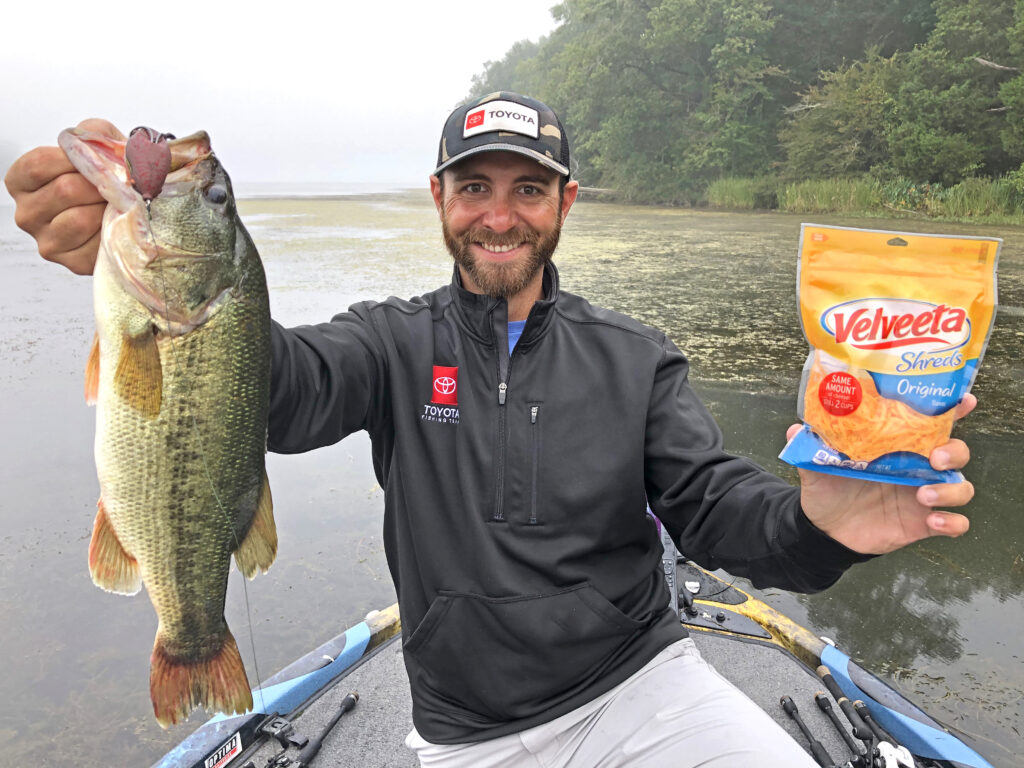 “The ‘cheese’ is actually dying algae,” says Gilliland. “As it dies, it turns yellow, and gasses emitted from the decay cause it to float. It can be found just about anywhere in the United States this time of year as long as the fishery has thick beds of hydrilla, coontail, eel grass, or milfoil for the dying algae to attach to,” he explains.

Lester, who lives near the southern epicenter of cheese-topped waters like Guntersville, has learned two key things to increase his hook-ups. First, don’t get in a hurry. Once you get bit, stay put. And secondly, have two different sizes of frogs tied on.

Asked to pick just one frog for the next year, he chose the original Spro Bronzeye size 65 in color Natural Red, but he never leaves the dock with just one size and color tied on.

“I can’t tell you exactly which size of frog to throw at a particular time. I’ve never really figured out why some days they prefer one versus the other – they just do. So, you have to experiment some days with a couple different sizes until you figure out which size they want most,” advises Lester.

Once you get a bite … stop! Don’t go hard-charging onward through the cheddar slop. Instead, stay put right where you got the bite, and make numerous casts to the same area that is likely not much bigger than a backyard swimming pool.

“Once you get one to blow-up you can pretty much bet there are more bass right in that super specific spot,” says Lester. “Don’t make the mistake of moving on like you’re going down the bank covering water with a crankbait,” he emphasizes.

“A lot of times, fishing the cheese can put a good limit in the boat from a spot twice the size of my Tundra. But you gotta stop and make several casts to that area once you get that first blow-up. Once you find ‘em, you’ll be dang near shaking on every cast as you anticipate another one crushing your frog,” Lester grins in conclusion.

Keep a couple different sizes of Kermie tied on and saturate a small area with casts once you get a bite. Two simple but critical pieces of advice from Lester that are sure to improve your chances in the cheese this fall as much as smoked sharp cheddar brings grins to tailgate parties.