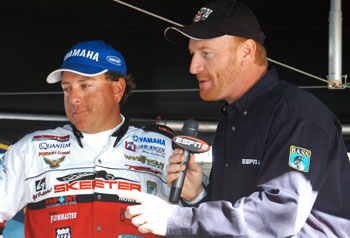 Claude “Fish” Fishburne will return to the Bassmaster Classic to share hosting duties for the Feb. 19-21 event based in Birmingham, Ala., with longtime Bassmaster Elite Series emcee Keith Alan.

He began hosting BASS tournament weigh-ins in 1998. His fishing background combined with his ability to have fun with a microphone in hand and his instant rapport with an audience quickly made him a popular stage personality. But Fishburne eventually moved on to pursue other opportunities in TV and event hosting.

Now he and his high-energy approach are back to entertain the thousands of fans expected to pack the Birmingham-Jefferson Convention Complex in downtown Birmingham. Fishburne will be on hand for three days of weigh-ins at the 40th Classic, in which 51 anglers will compete on Lay Lake in Shelby County for a $500,000 top prize.

Fishburne will work alongside Alan, the quick-witted and able anchor of Bassmaster Classic shows and Elite weigh-ins since 2006. Why two emcees?

“We are always striving to heighten the fan experience,” said Jamie Wilkinson, BASS senior director, events & business development. “Fish brings a unique presence to the Classic and we are confident in his ability to entertain what promises to be a tremendous crowd.” Fishburne said he can’t wait to again be part of the biggest event in sportfishing.

“I’m very, very excited about it,” he said. “I hosted in 2002 when the Classic was on Lay Lake, and the weigh-ins were in Birmingham, so it will feel like a homecoming in more than one way.”

His role likely will change from day to day, but his focus always will be on creating interactive fun for the fans, he said.

“I want to make it happy and fun and exciting — I want to help create a good time for everyone there — whether I’m, say, in the stands talking with fans or backstage interviewing an angler waiting to weigh in, or on the Bassmaster Classic Outdoors Expo floor,” Fishburne said.

His off-site interviews will be presented on video screens inside the arena of the BJCC for the daily weigh-ins, so fans can catch every minute. He said he also could host some segments on a secondary stage on the main floor of the BJCC.

While the daily weigh-ins are the big draw of any Classic, fans can look forward to other activities, all free and open to the public. Highlights include concerts by two top country music artists preceding Friday and Saturday’s weigh-ins: Darryl Worley will appear at 3:30 p.m., Friday, Feb. 19, and Chris Young will perform at 3:30 p.m. Saturday, Feb. 20.

Like the weigh-in shows, the concerts are free. Doors to the BJCC arena will open at 3 p.m. Friday and Saturday, and at 3:30 p.m. Sunday.

Also with no admission fee, the Bassmaster Classic Outdoors Expo presented by Dick’s Sporting Goods at the BJCC will be loaded with fun family activities and the newest fishing, boating and hunting products. Last year’s Expo at the Classic in Shreveport-Bossier City, La., broke attendance records two days running, and this year’s version of the show promises to be just as popular. Show hours are set for noon-8 p.m. Friday; 10 a.m.-8 p.m. Saturday; and 10 a.m.-4 p.m. Sunday.

Fans are invited to watch the pageantry as the anglers launch their boats into Lay Lake beginning at 7 a.m. at Beeswax Creek Boat Ramp, 537 Beeswax Park Rd., Columbiana, Ala.

ESPN2 will cover the competition with 11 hours of programming during the event, including same-day, two-hour shows. Those will be Saturday, Feb. 20, and Sunday, Feb. 21, from 10 p.m.-midnight.

Extensive online coverage will include Bassmaster.com photo galleries, standings and analysis. The cutting-edge technology of BASSCast returns, bringing onboard action to fans who click in at Bassmaster.com. BASSTrakk technology will provide an unofficial leaderboard based on estimated weights of angler catches while the competition is happening.

The three days of ESPN and BASS coverage will originate from land and water, beginning daily before dawn and extending well into the evening. Hour by hour, fans will be able to track the 51 Classic competitors as they go for a piece of the $1.2 million payout, including the $500,000 first-place prize and coveted Classic trophy.