WARSAW, Mo. – Weighing 17 pounds, 6 ounces on Day 2 to move into the top five, Hunter Baughman made his first cut at the Toyota Series Presented by A.R.E. level. On the final day at Truman Lake, Baughman crushed the biggest bag of the tournament, 19-1, to earn the win with a 48-10 total. For his efforts, Baughman takes home $33,929 and the biggest win of his career by far. Local anglers Brad Jelinek (47-0) and Brock Reinkemeyer (46-8) rounded out the Top 3. 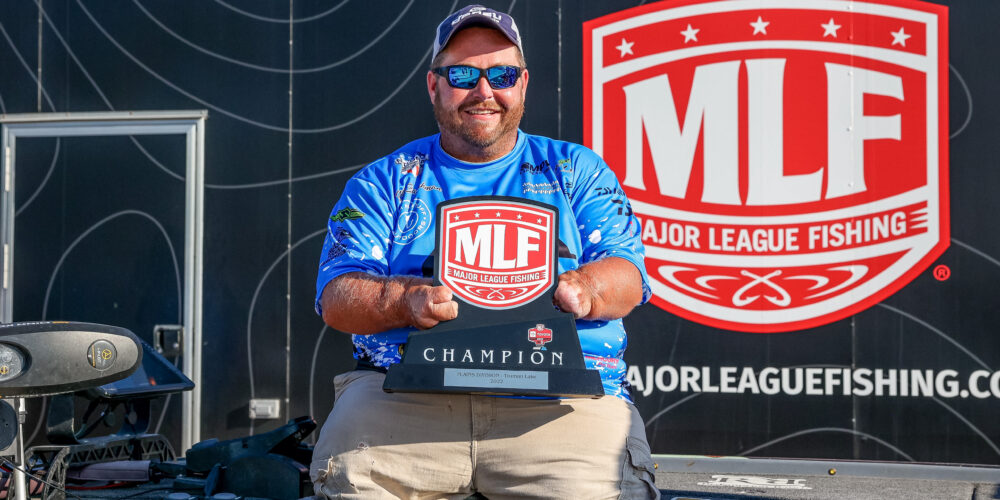 “I’m tickled about the win, it’s such a blessing,” Baughman said. “I’ve been doing this for a long time at this level and I’ve fished nationally with another league for two years, I’ve never won anything outside of a statewide tournament. I’m just absolutely beside myself.”

Having never fished Truman Lake before, Baughman leaned heavily on the 100-plus waypoints he logged during three days of practice. He targeted bass in offshore brush and rock piles, ranging from 5 to 15 feet in depth.

“Everyone else was graphing,” he said “But when I’d find several piles I’d go 700 or 800 yards graphing with the LiveScope and find little stumps no one was seeing on their side imaging. I might catch one on every tenth stump, but it would be a good one.”

Baughman had a role in designing the Brazalo jigs he did most of his damage with this week, utilizing both a 3/4-ounce football jig and a 5/16-ounce finesse jig.

“They seemed to like the ¾-ounce a little better, but I definitely caught them on both this week,” Baughman said. “I had one little rock pile I found, I flipped up there with a football jig and got hung immediately. I kicked the trolling motor on high and went to get it, then I looked on LiveScope and saw a fish swim around the pile. I stopped, dropped my [Power-Poles], broke my jig off, picked up the finesse jig and caught a 5-pound kicker.”

Some fish even liked his jig so much, they decided to come back for a second helping.

“I broke a fish off on Day 1 that was a keeper, and I went back to that spot on Day 3 and caught a fish and didn’t think anything about it,” Baughman said. “Later my co-angler looked in the livewell and that jig I lost on the first day was in the livewell – that same fish had spit it up.”

That wasn’t the only fish he encountered that made its way into the boat and ultimately on the scale under some pretty extraordinary circumstances.

“I’ve had two or three this week that shouldn’t have ever come out of the brushpiles and they came to the stage,” Baughman said. “I had one that was hung in a brushpile for 5 minutes that finally came out. I had another 4 ½-pounder that I tried to break off, and when I tried to snap the line it ended up coming out of the pile.”

Baughman, who considers himself “limb-challenged,” lost both of his legs below the knees, his left hand, and digits on his right hand to bacterial meningitis at only nine months old.  An avid angler and hunter, he has never let it slow him down.

With a tight race at the top of the leaderboard all week, it’s tough to tell which fish ultimately made the difference, but there’s no doubt the timing was right for Baughman to take home his first Toyota Series victory.

“There were a lot of things that shouldn’t have went the way they did,” Baughman said. “Especially with fish I should’ve lost. Sometimes when it’s meant to be, it’s meant to be.”