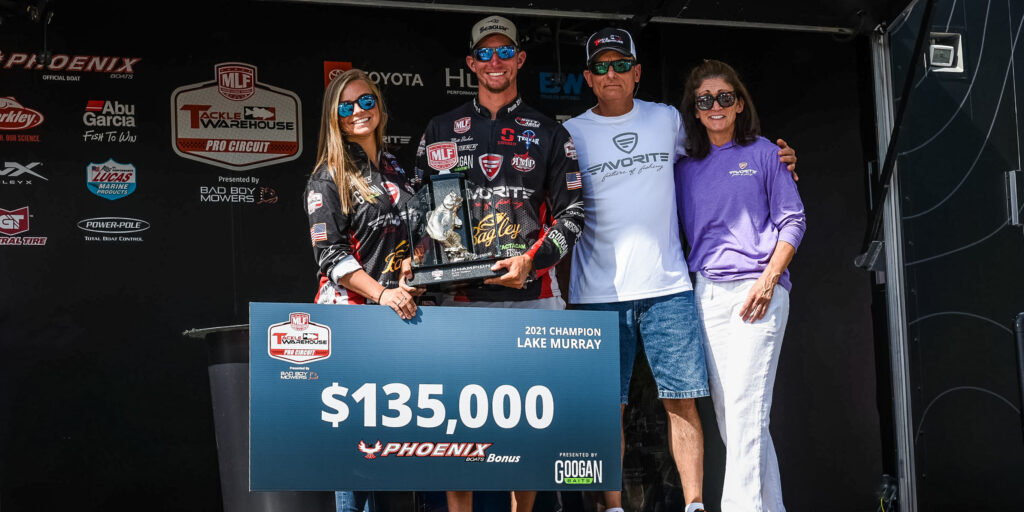 “This has been years and years in the making,” said an emotional Becker on stage after being crowned champion. “I was really beginning to think that I couldn’t win. I’ve always been consistent, near the top of the standings. But I was really starting to doubt that I could win. Just to make a top 10 against this group of hammers is unbelievable. They always say when it’s your time, it’s your time. And man, did I live that this week.”

The 2018 Tackle Warehouse Pro Circuit Rookie of the Year started Day 1 of the event with a plan to target docks and sight-fish spawning bass. But, before doing that, Becker slotted in a little time to try a risky timing/herring-spawn pattern, and he ended up never changing. He kept hitting, and re-hitting, as many points as possible knowing that eventually the schools of bass would move shallow to feed.

“The spot I caught them Day 2, I had fished three times before I caught them,” said Becker. “I knew the fish were there, but I rotated through multiple times and never had a bite. Then I came back and they were there and they were eating. I went from zero to 14 pounds in minutes.”

Becker said his key baits throughout the week were a couple of different soft-plastic jerkbaits, with the Googan Baits Dart (Green Gizzard Shad) being his best option. He rigged the Dart on rigged on a TroKar TK 180 hook with a TroKar TK 300 treble hook as a stinger. He threw that on a 7-foot, 5-inch medium-heavy Favorite Fishing Hex rod, Favorite Fishing Soleus XCS reel and 15-pound-test Seaguar InvizX fluorocarbon line.

“All week, the little things just always lined up,” Becker said. “Today, I pulled into a cove and I got this overwhelming feeling I was going to go to the first point and catch a 3 ½-pounder, and then I’d go to the second point and catch another 3 ½-pounder. And that’s exactly what happened. That pretty much got me the win.”

The MLF Tackle Warehouse Pro Circuit presented by Bad Boy Mowers, Googan Baits Stop 3 Presented by Favorite Fishing – Lake Murray air on a two-hour action-packed television show that premieres on the Outdoor Channel on Sunday, July 25 from 7 to 9 a.m. ET and re-air on the Sportsman Channel this fall.

The MLF Tackle Warehouse Pro Circuit presented by Bad Boy Mowers, Googan Baits Stop 3 Presented by Favorite Fishing – Lake Murray was hosted by the Capital City Lake Murray Country Regional Tourism Board. The next event for Pro Circuit anglers will be the Grundéns Stop 4 Lake Eufaula in Eufaula, Alabama, May 13-16, 2021.

In Tackle Warehouse Pro Circuit competition, the full field of 161 anglers competed in the two-day opening round on Thursday and Friday. The field was cut to 50 anglers on Saturday. Only the top 10 pros based on their three-day cumulative weight advanced to Sunday where the winner was determined by the heaviest accumulated weight from all four days of competition.