WADDINGTON, N.Y. — With the help of a 6-pound smallmouth, the Bethel University duo of Tristan McCormick and Stevie Mills caught a five-bass limit that weighed 24 pounds, 9 ounces to claim the Day 1 lead at the Carhartt Bassmaster College Series National Championship presented by Bass Pro Shops at the St. Lawrence River. 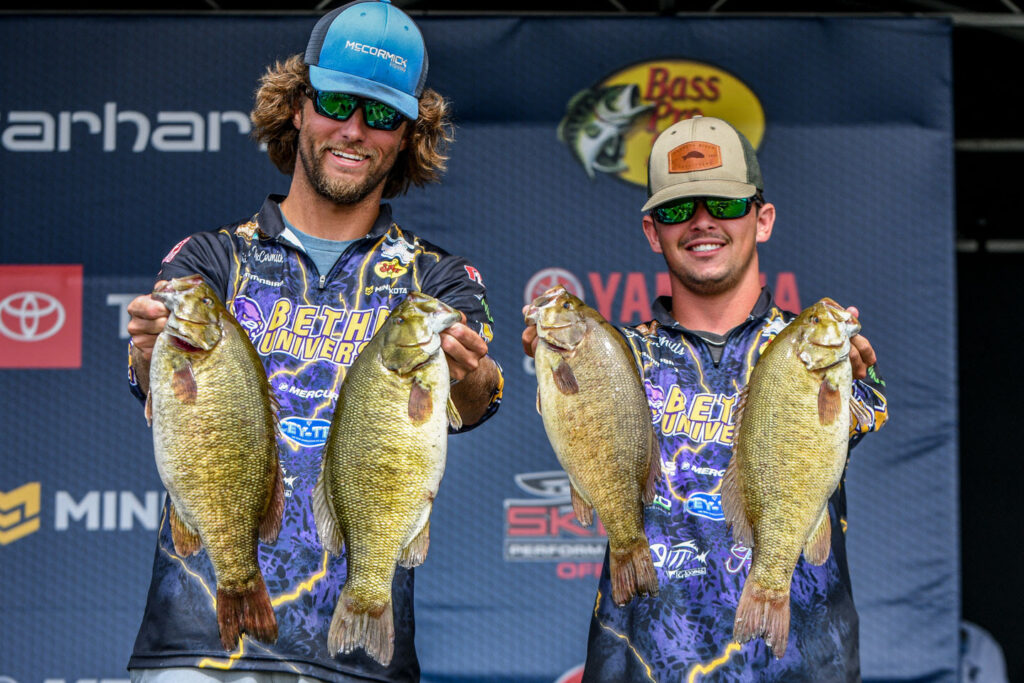 McCormick and Mills hold a 13-ounce lead over the second-place team of Hunter Bond and GL Compton from Clemson University.

“Our main goal was to go out there and have fun and let the chips fall where they may,” McCormick said. “It was unbelievable. It was a superblessed day. The Lord works in mysterious ways because the last thing we expected was to do that. We are superexcited to get back out there tomorrow and see what happens.”

During their official practice time, Mills and McCormick caught plenty of 2-pound fish in a specific area but had no confidence heading into the event that they would be able to catch big ones.

So, when they reached the area Thursday, they were pleasantly surprised to find the quality had improved.

“We caught two pretty quickly, 2 1/2-pounders, and then we caught a big one. And then it went to chaos after that,” McCormick said. “We said last night that there had to be some big ones mixed in because every time we caught one I would scan the forward-facing sonar over there and see 10 with it. It was just a matter of putting the bait in front of the bigger ones.”

During their flurry, Mill estimates they caught between 15 to 20 fish.

“Just about every time we dropped down we were getting a bite,” he said. “I think those fish were posted up there, hugging the bottom. If both of our baits got around them, it didn’t matter if they were 2 inches away or 20, they were getting it.”

While the current interfered with the effectiveness of their forward-facing sonar initially, it played a big factor when they did hook a bass.

“The biggest thing is when he hooked one, I would scan the sonar over to see if there were any following it,” McCormick said. “Ninety-nine percent of the time, you can flick another bait over there and catch one of the followers, and we did that a bunch.”

Hailing from Kentucky Lake, Mills said that while his home lake has current, the St. Lawrence River is a whole different experience.

“You have current at Kentucky Lake, but this is all natural and it is always flowing,” Mills said. “That’s why these fish are as strong as they are. We don’t ever get to fish anywhere like this where you get to see 20 feet down. I like it a lot.”

After suffering through a slow morning, Compton and Bond finished Day 1 with 23-12 and anchored their bag with a 5-0 smallmouth.

“We stopped on some places we thought we would get some bites and some big bites,” Compton said. “We kept moving around to our different areas and we finally landed on a good group of fish around 11 (o’clock).”

Knowing the smallmouth had finished spawning, Bond said he and Compton focused on current seams. They found several different areas in practice and after hooking up with one or two bass in a spot, they would move to different water.

“Every day we had a consistent 16 or so pounds,” Bond said. “We weren’t trying to use up every one of our spots. We went to those spots and just hoped one of them had the fish there, and we hope they are there tomorrow as well.”

While they had never fished the St. Lawrence River before, Compton said they had been able to fish a couple of different smallmouth events that helped them prepare for this event.

“Hopefully we can keep the ball rolling tomorrow,” Compton said. “But nothing is guaranteed.”

With 22-14, the Adrian College duo of Hayden Scott and Griffin Fernandes landed in third place. After failing to catch a fish over 4 pounds in practice, they landed a 6-0 smallmouth to anchor their Day 1 bag.

“We had a shoal we were fishing that we got bit on in practice and never really got a big bite. He hooked a 4 1/2-pounder. We had just netted it and I picked up my rod to make sure it didn’t get sucked into the trolling motor on Spot-Lock.

“It was loaded up so I assumed it was stuck in the prop, and I started catching up to it and realized it started going to the other side of the boat. It came up and laid on its side.”

With a goal of 18 pounds for the day, Scott and Fernandes caught a couple of smaller keepers before figuring out how to entice the bigger bites.

“We knew we were around fish and so we stuck with it,” Scott said. “The first three spots we caught a couple of keepers and then all of a sudden it clicked. Later in the day, we still had a couple of little ones and then boom, back-to-back 4-pounders and we are right in it.”

The duo is rotating between several different deeper shoals, with current and wind direction making a big difference.

“We know there are fish on all of them, they just have these feeding windows and we hope to pull up on the right one when that school is eating,” Fernandes said.

Tripp Bowman and Blakely Young from Louisiana State University-Shreveport had the Carhartt Big Bass of the Day with a 6-10.

The full field will compete again Friday, taking off at 6:30 a.m. ET from Whittaker Park and returning for weigh-in at 2:30 p.m. The Top 12 at the conclusion of Day 2 will advance to Championship Saturday.

The Top 3 after the final day will punch their tickets to the College Classic Bracket, where the top finisher will earn a berth into the 2022 Academy Sports + Outdoors Bassmaster Classic presented by Huk.

This week’s tournament is being hosted by the Village of Waddington, St. Lawrence County Chamber and Clarkson University. The tournament is also supported by a Market New York grant from I LOVE NY/New York State’s Division of Tourism awarded as part of the Regional Economic Development Council initiative. The tournament and all associated festivities are being planned to ensure the safety of athletes, staff and guests.