WETUMPKA, Ala. — Anchored by a 3-pound, 7-ounce largemouth, Tucker Smith weighed in a five-bass limit Saturday that tipped the scales at 10-2 to advance past his Auburn University teammate and partner Logan Parks and into the semifinal round of the Carhartt Bassmaster College Classic Bracket presented by Bass Pro Shops on the Coosa River. 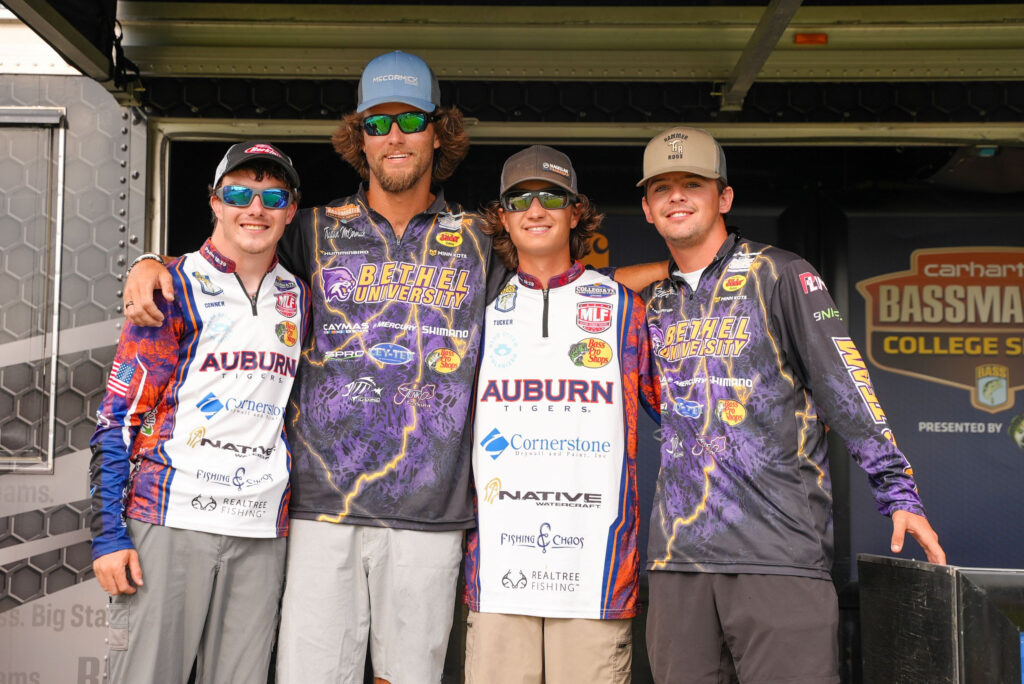 Conner Crosby and Tucker Smith of Auburn University and Tristan McCormick and Stevie Mills of Bethel University have advanced to the second round of head-to-head competition in the 2021 Carhartt Bassmaster College Classic Bracket presented by Bass Pro Shops on the Coosa River. Photo by Kyle Jessie/B.A.S.S.

Smith led all anglers in total weight, edging out No. 1 seed Tristan McCormick by 9 ounces in the overall standings.

While Smith has experience on this section of the Coosa River, growing up just over an hour away from the takeoff site, he practiced like it was a new body of water and found the topwater bite was good during cloudy conditions. The clouds Smith was hoping for, however, did not materialize during Day 1.

“It wasn’t as good as it could have been,” Smith said. “Hopefully tomorrow it will be cloudier and they will bite better during the day. Cloud cover is the biggest thing for me. I can catch a few with the sun out, but if there are clouds it would be better for sure.”

After catching 8-11 on qualifying day to secure the No. 2 seed, the morning bite on Day 1 was key for Smith, who landed around 15 total bass in the first couple hours of the event, including the big largemouth in a system known for its quality population of spotted bass.

“That really separates you when the fishing is this tough,” Smith said. “I was really excited about that one. The largemouth get [big] up there, and usually, when you catch one, they are going to be superfat.

“I had it on a spinning rod so it was kind of frightening. On 10-pound test it wasn’t a very fun fight. It changed my day around and it got the ball rolling.”

From there, the three-time high school national champion moved out of his most productive area and tried some different stuff, but didn’t find the quality he found early in the morning. With warmer temperatures still hanging around southern Alabama, Smith said the bass aren’t fully committed to a fall pattern and it has made the fishing a lot more challenging.

“It doesn’t seem like you can go throw a topwater all day and catch them,” he said. “You kind of have to grind it out after the sun comes out.”

The general game plan will remain the same for Smith Sunday, but changing with the weather conditions will be the key to his success.

“I’m going to fish the conditions and see how it goes,” Smith said. “I learned a lot this afternoon so I’m going to try and use that to adjust and catch more.”

Meanwhile, McCormick overcame adversity to end the day with a 9-9 limit and defeat Hayden Scott from Adrian College.

Early in the morning, the Bethel angler missed a couple of key fish on a topwater. Then later, he swung a quality largemouth into his boat, only for it to come unbuttoned and slide across the front deck and back into the water.

“I tried not to get spun out and I was telling myself I needed to stay in it mentally,” McCormick said. “I kind of laughed about it and moved on.”

McCormick shifted through a couple of areas throughout the day, starting in a spot with a lot of current. After losing the first big one, he landed a 3-4 bass as well as a few smaller fish to move his total weight to around 7 pounds early in the day.

From there, he moved downriver where he flipped and threw a topwater bait to catch a few smaller bass before losing the largemouth over the side of the boat. With a few hours to go, McCormick moved back to his starting area and found the current had slacked off, but on his second cast he landed a quality fish that helped him advance.

With over 10 pounds on qualifying day, McCormick earned the overall No. 1 seed for the event and during practice, he learned that the morning bite would be key.

“The first day of practice, it was cloudy for most of the morning and the topwater bite lasted a lot longer,” he said. “There is a lot more activity and fish busting on the surface. I knew it was going to be tough when the sun came out.”

With a front moving into the area Sunday, McCormick said he hopes that the cloud cover will return and fire up the bass.

“It’s tough, but you still catch a bunch of fish. It is just trying to get the quality,” he said.

Fellow Bethel University angler Stevie Mills, the No. 3 seed, caught 6-13 to advance against Auburn angler James Cobbs, who landed 5-15. Meanwhile, fifth-seeded Conner Crosby caught 6-2 and earned the victory over Adrian College angler Griffin Fernandes, who fell short of a limit and weighed in 4-15.

In the Final Four, it will be Auburn against Bethel on both sides of the bracket as McCormick will face off against Crosby and Smith will go head-to-head against Mills.

The winners of the head-to-head matchups will advance to the championship round Monday for a chance to qualify for the 2022 Academy Sports + Outdoors Bassmaster Classic presented by Huk at Lake Hartwell. The final champion will also earn paid entry fees into the 2022 Basspro.com Bassmaster Opens with a fully-rigged Nitro and Toyota Tundra.

Anglers will take off at 6:30 a.m. CT and will conclude their day at 2:30 p.m. Bassmaster College Classic Bracket LIVE presented by Bassmaster Fishing 2022, the Official Video Game, will stream live on Bassmaster.com and the FOX Sports digital platforms beginning at 7 a.m.