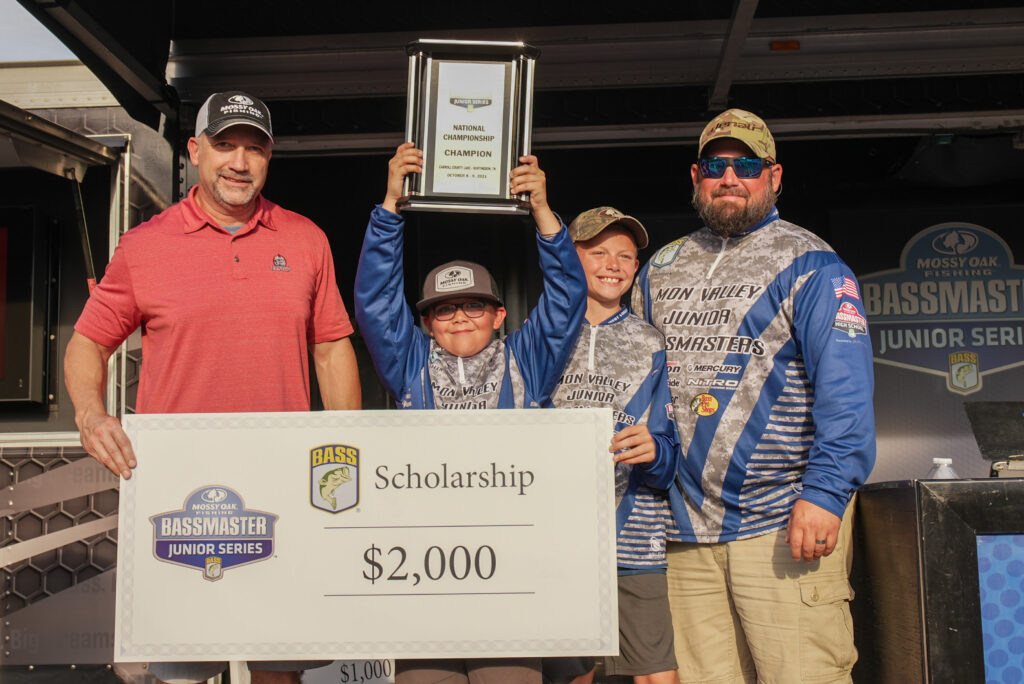 Starting their day on a windward mid-lake point that went from about 7 to 25 feet, the anglers threw Carolina rigs with 1-ounce weights, 3-foot leaders and green pumpkin Strike King Space Monkey baits.

After placing 28th on Day 1 with a four-fish bag of 3-8, the anglers from West Virginia more than quadrupled their productivity by turning in a final-round limit of 16-3 — the event’s heaviest catch. For their efforts, Hollen and Clark will split a $2,000 scholarship.

Hollen said the point they fished was a place they had visited during a previous Bassmaster Junior National Championship event. Patient presentations were the key.

“We made long casts and reeled it kind of slow,” Hollen said.

Hollen and Clark caught a few fish — including their first keeper of the day — on a drop shot. They fished this finesse rig with 4- and 6-inch Roboworms in the morning dawn color.

Hollen, who had plenty to say on stage, was nearly speechless when he lifted his trophy. Clark shared the enthusiasm and noted that catching a pair of kickers sweetens the experience.

Clayburn Reed and Gavin Gooding of Academy at the Farm finished second with 16-7. After placing 11th on Day 1 with a 5-pound limit, the Florida anglers added a four-fish bag of 11-7, which included a 6-12. Reed and Gooding earned a $1,000 scholarship.

“We changed things up today after we figured something out yesterday,” Reed said. “Today, we figured we should fish topwaters shallow in the morning. We were mostly fishing offshore yesterday, but we saw some bigger fish moving up shallow.

“This morning, we went to a cove and fished shallow and caught (that big fish) on a Yo-Zuri Pencil Popper in a translucent shad color.”

Gooding said he and his partner caught the other three keepers on a Texas-rigged pink stickworm. They fished that bait around shallow trees and offshore grass.

Brooks Hibbit and Grant Buzard of the Hartley’s Hawgs Youth Fishing Club finished third with 16-3. Catching an 8-1 gave them a big Day 1 lead with a 12-1 limit. Today, they could manage only 4 fish for 4-2.

“If we hadn’t caught that big fish (on Friday), we probably would have had only 8 pounds (total),” Hibbit said. “We weren’t on them today. It kind of started like it did on Day 1; about two hours in, no fish.

“But we got three fish in like 10 to 15 minutes. It was probably 10 casts, but that was the only hot action we had. We probably moved back and forth across the lake three or four times, just looking for spots, but it didn’t work that well.”

Sticking with their Day 1 strategy, Hibbit and Buzard slow-rolled Carolina-rigged green pumpkin Venom Trench Hogs. They used 4-foot leaders to allow the bait to float up as the weight impacted bottom structure.

For their third-place finish, Hibbit and Buzard won a $500 scholarship. They also took home the $200 Big Bass scholarship for their 8-1.

The Bassmaster Junior Series National Championship was hosted by the Carroll County Chamber of Commerce.