Momentum and confidence play as big a role in professional bass fishing as the equipment an angler uses. This notion has often been discussed, but that doesn’t change the reality behind it. When a fisherman is feeling good and fishing well, every decision seems to be the right one. On the contrary, when things are going poorly it can seem almost impossible for even established pros to turn the tide. 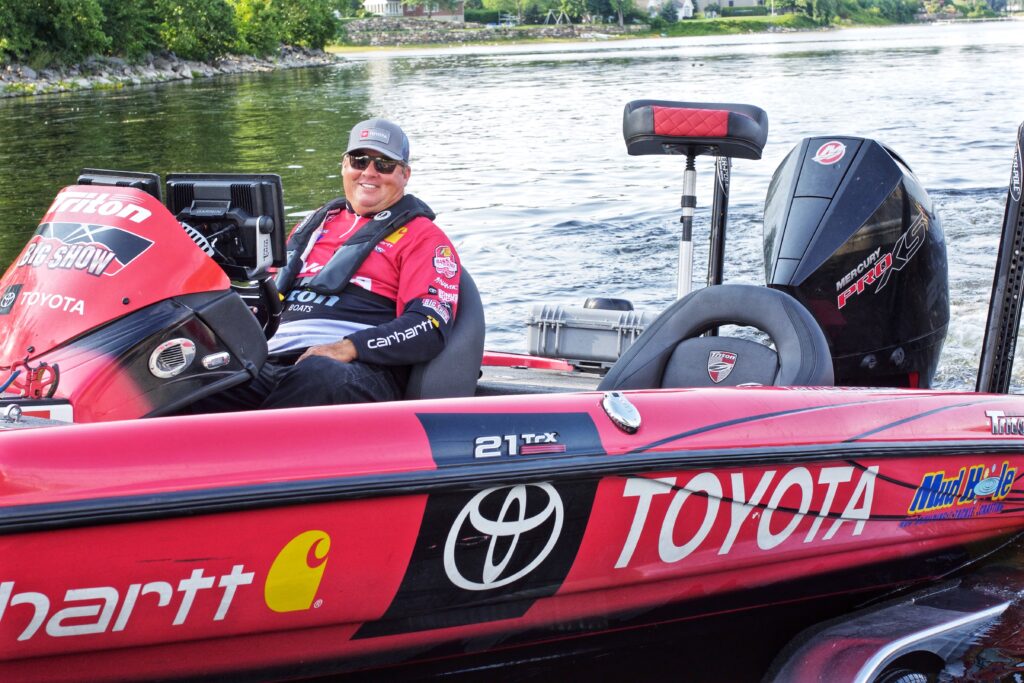 Team Toyota’s Terry “Big Show” Scroggins is an adamant believer of the role momentum plays in an angler’s mind. He doesn’t claim to truly understand it, or how to control the ebbs and flows of momentum, but “Big Show” knows it plays a factor. Currently Scroggins is riding the positive side of this logic, but it came around when he least expected it.

Scroggins didn’t have the start he was hoping for to begin the 2021 Bass Pro Tour season. But Stage 3 on the Harris Chain in Florida was practically his backyard, and a fishery he has a lot of experience on. Big Show 100% believed he would have a strong tournament on the Harris Chain and get his momentum moving in the right direction for the remainder of the season.

At least that was his thought until intense pain in his newly replaced knee forced him to the hospital for emergency knee surgery to treat a dangerous infection the night before the tournament began. Scroggins had to completely miss Stage 3 and had legitimate concerns of being able to compete at all the rest of the season.

“Honestly I was feeling pretty low,” Scroggins admitted. “I missed the Harris Chain, a tournament I had been looking forward to all year. I could barely stand up, let alone fish. And I had a PICC Line stuck in my right arm I had to have serious antibiotics pumped into each day. I was down, but after the first few days of recovery, making Stage 4 at Lake Chickamauga became my ultimate goal.”

Scroggins spent two weeks resting and focusing on rehab before his doctors, somewhat reluctantly, gave him the green light to compete in Stage 4. Remarkably, Scroggins went out and made his first Knockout Round of the year on Chickamauga with a bum knee and the odds stacked against him.

Major League Fishing officials and tournament staff were aware of Scroggins situation and were extremely supportive throughout his rehab process. He was given a special boat official to administer his antibiotics into the PICC Line each day of competition. Scroggins had to fish through extreme discomfort, but through stubbornness and hard work the Big Show achieved his goal.

Since that tournament Scroggins has gone on to make two consecutive Knockout Rounds in Stage 5 and Stage 6. Completely turning his season around for the better.

Coming into Toyota Stage 6 on Lake Champlain Scroggins said he was feeling the positive momentum he’d been riding since his surgery, but doesn’t claim to fully understand why.

“To me its just more proof that our sport is a lot more mental than we like to think,” Scroggins said. “You know my knee deal kinda threw a wrench in my plans… the thing hurts! Especially those first couple tournaments after the surgery. But in a strange way, having to put the discomfort out of my mind might help me focus on fishing when I’m on the water.

“It definitively changes my decision making process just because it makes me move a little slower and not want to run around nearly as much. Instead of thinking about the next three places to get a bite, I’m thinking about how I can catch fish in the spot I’m already sitting at. I really don’t know, but maybe that’s a part of it.”

Whatever the reasoning may be, Scroggins isn’t too worried as long as he can keep the ball rolling into Stage 7 on Lake St. Clair. Scroggins is hopeful with another strong finish he can sneak into qualifying for his first REDCREST next February in Oklahoma. Regardless of how his season plays out, there can be no questioning the heart and toughness of the “Big Show”.