LEESBURG, Fla. (May 24, 2021) – Berkley pro Bobby Lane of Lakeland, Florida, boated 14 bass weighing 34 pounds, 2 ounces to hold off a hard-charging Ott DeFoe of Blaine, Tennessee, and win the two-day Qualifying Group B round at the Major League Fishing (MLF) Bass Pro Tour Favorite Fishing Stage Three Presented by Bass Cat Boats at the Harris Chain of Lakes in Leesburg, Florida. After Lane started the day with a 24-pound lead, DeFoe’s massive rally had him within 8 pounds of Lane’s lead early in the second period, but Lane pulled away in the third and earned the victory with a two-day total of 39 bass weighing 102 pounds, 6 ounces. 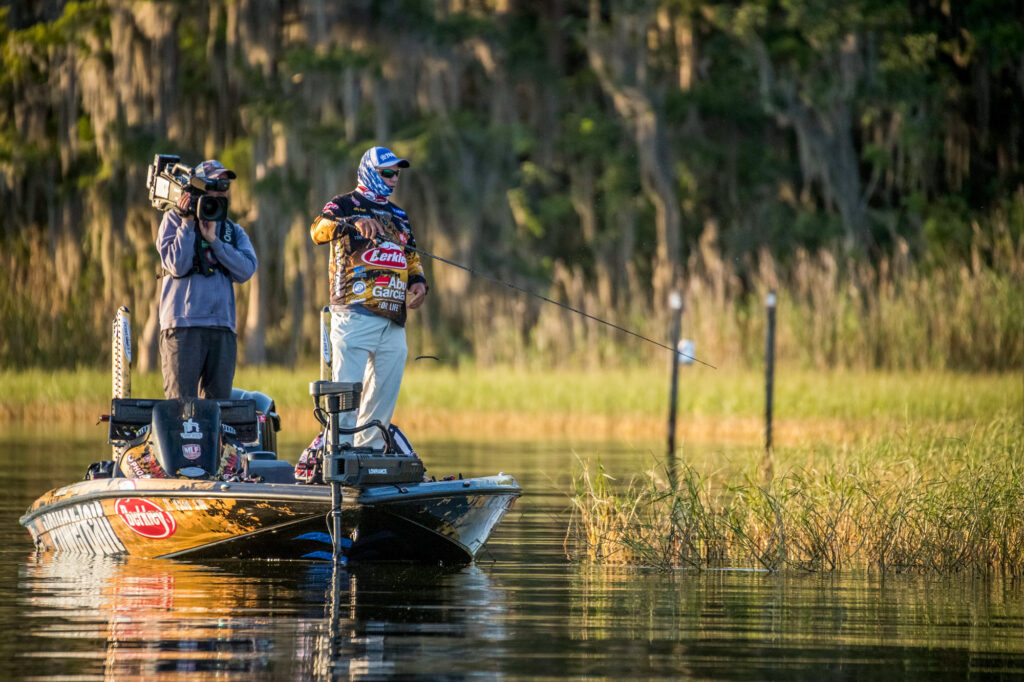 Florida Pro Holds off Hard Charge from Tennessee’s Ott DeFoe to Advance Directly to Wednesday’s Championship Round, Field of 38 Set for Tuesday’s Knockout Round

The six-day tournament, hosted by Lake County, features 80 of the top professional anglers from around the world competing for a purse of $805,000, including a top cash prize of $100,000 to the winner.

The remaining 38 anglers – 19 from Group A and 19 from Group B – will now compete Tuesday in the Knockout Round, where weights are zeroed, and the anglers compete to finish in the top eight to advance to Championship Wednesday. Wednesday’s Championship Round will feature Group A winner Brett Hite, Group B winner Bobby Lane, and the top eight anglers from the Knockout Round competing in a final-day shootout for the top prize of $100,000.

“I really didn’t plan on fishing that hard today, but Ott DeFoe scared the living fire out of me,” Lane said in his post-game interview. “I had been planning to start practicing in the second round, but Ott was catching them so fast I knew it was only a matter of time before I was his next victim. We’re all competitors out here, though, and it doesn’t get much better than that. That was an awesome round.”

“That bait really got it done for me today,” Lane said. “I missed a lot of fish, but I think a lot of them were small. But none of that matters anymore because we’re moving on to the Championship Round. There will only be 10 of us left on Wednesday, and I’m so excited because I get to keep a flipping stick in my hand all day long. Let’s see if this Florida boy can get it done on one of his favorite lakes.”

DeFoe, meanwhile, overcame every negative fishing superstition that you can think of on his whirlwind day.

“I ate a banana in my boat this morning, and on my very first cast I missed one on a swimjig,” DeFoe said. “So, not only did I have a banana, but I had a bite on my first cast. I did miss it, but after that it was on, quick. I caught a couple of scorable bass, then I caught a really nice one, and then it just kept rolling after that.

“The morning was really unbelievable and set the tone for the day,” DeFoe continued. “On Saturday I went to Lake Griffin, but today I stayed close and was able to use the 30-minute ride-around period to actually look around. I graphed and idled and looked at some different stuff, and by the time the 30 minutes was close to being up, I had idled a stretch that had Kissimmee Grass, a few docks, and some baitfish flipping. I just figured that looked as good as anywhere to start. It ended up being pretty special.”

DeFoe said that he caught some fish on a swimjig and a topwater bait, but his key lure was a Rapala OG Slim Crankbait in a new color – bream – set to debut at ICAST in July.

“That bait has some chartreuse and green and blue and some brown, with a white belly – it’s just an excellent dirty-water color, and that’s what we’ve got out there right now with the algae bloom,” DeFoe said.

“There is definitely some fish left there that I didn’t catch, and I’m definitely going to start there tomorrow,” DeFoe went on to say. “But, what was interesting, the area I started in and I fished down through there… eventually I ran into Andy Montgomery, who was catching them this morning. Then a little bit later, (James) Watson runs by and he was catching them today. And Alton Jones came by, and he caught them today. That area of the lake, there was a lot of fish caught today. So I hope it can produce again tomorrow.”

The top 20 pros from Qualifying Group B that now advance to Tuesday’s Knockout Round on the Harris Chain of Lakes are: