EUFAULA, Ala. (May 13, 2021) – Pro Bobby Lane of Lakeland, Florida, weighed a five-bass limit totaling 20 pounds, 8 ounces Thursday to grab the early lead after Day One of the MLF Tackle Warehouse Pro Circuit Presented by Bad Boy Mowers, Grundéns Stop 4 Presented by A.R.E. at Lake Eufaula. Pro Jason Abram of Piney Flats, Tennessee, ended the day in second place, just 5 ounces behind Lane after bringing a 20-3 limit to the scale. The fourth stop on the Tackle Warehouse Pro Circuit features bass fishing professionals from around the world competing for a shot to win up to $135,000. 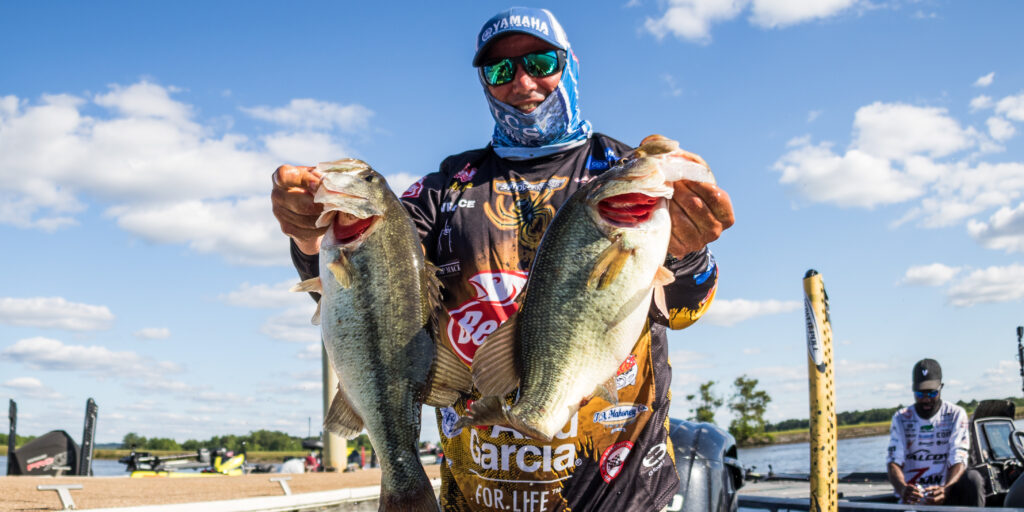 Lake Eufaula was a bit stingy on Day 1 of the event, with only 90 pros catching a limit and less than half the field bringing more than 10 pounds to the stage. However, that didn’t seem to affect Lane or the other anglers atop the leaderboard.

Although he finished the day leading the pack, Lane said the morning did not start as he had anticipated.

“My initial plan was to catch them on a swim jig up on the shad spawn, but with the high winds and lower water levels this morning, it was hard to even keep the bait in the grass,” said Lane. “I thought I’d catch 12 to 15 pounds there easily – that’s what happened every morning during practice – but today it was super muddy and tough.

“Once I realized I wasn’t having any luck, I decided to switch to my back-up plan and run up North. I caught a 4-pound, 8-ounce bass first, followed by a 5-pounder and before I knew it, I had a limit.”

Feeling a little more secure, Lane said he started running waypoints, and to his surprise was able to cull and upgrade fish at every single one.

“At the end of the day, I pulled up in the creek [close to the ramp] and caught a real nice 4-pounder that culled a 2-pound fish, to get me over 20 pounds,” said Lane.

When it comes to his game plan for tomorrow, Lane said he’ll just have to see what Lake Eufaula has to offer and where he needs to adjust.

“I have no idea what tomorrow brings – I went almost three hours today without even a bite, fishing stuff that I should have been getting bit on,” said Lane. “I think they are feeding early so I’m hoping they are moving in and out of the same areas and I can be there to catch them early each day.

“This is the time of year I love to be on the water and I’m doing what I love to do – throwing a swim jig, a frog and flipping. It’s Lake Eufaula, so the fish live shallow year-round. I’m just hoping I can fish clean tomorrow and go out there and have fun.

“If I catch them tomorrow, I catch them, and if not, I caught enough today to probably survive and get a decent finish no matter what.”

The top 10 pros after Day 1 on Lake Eufaula are:

Abram won the day’s $500 Berkley Big Bass award in the pro division after bringing a largemouth weighing 6 pounds, 6 ounces to the scale.

In Tackle Warehouse Pro Circuit competition, the full field of anglers compete in the two-day opening round on Thursday and Friday. The top 50 pros based on their two-day cumulative weight advance to Saturday. Only the top 10 pros continue competition on Sunday, with the winner determined by the heaviest accumulated weight from the four days of competition.

Anglers will take off at 6:30 a.m. CT each day from Lakepoint Resort State Park, located at 104 Lakepoint Drive in Eufaula. Weigh-ins will also be held at the park daily at 3 p.m. Fans are encouraged to follow the action online through the MLF NOW! live stream and coverage at MajorLeagueFishing.com.

The MLF Tackle Warehouse Pro Circuit Presented by Bad Boy Mowers, Grundens Stop 4 Presented by A.R.E. – Lake Eufaula event will feature live on-the-water coverage and a two-hour action-packed television show that will premiere on the Outdoor Channel on Sunday, August 22 from 7 to 9 a.m. ET and re-air on the Sportsman Channel this fall. Weigh-ins will be streamed daily and fans can catch live on-the-water action all day Saturday and Sunday, May 15-16 on MLF NOW! beginning at 7 a.m. CT at MajorLeagueFishing.com. 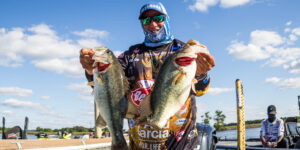