Final 10 Anglers Set for Championship Wednesday and Final-Day Shootout for $100,000

AUSTIN, Texas (May 4, 2021) – Berkley pro “Big Fish” Bobby Lane of Lakeland, Florida, caught 14 bass Tuesday totaling 28 pounds, 1 ounce to win the Knockout Round and advance to the final day of competition at the Major League Fishing (MLF) Bass Pro Tour Berkley Stage Two at Lake Travis Presented by Mercury event in Austin, Texas. The final 10 anglers are now set, and competition will resume Wednesday morning with the Championship Round. Weights are zeroed, and the angler that catches the most weight will win the top prize of $100,000. 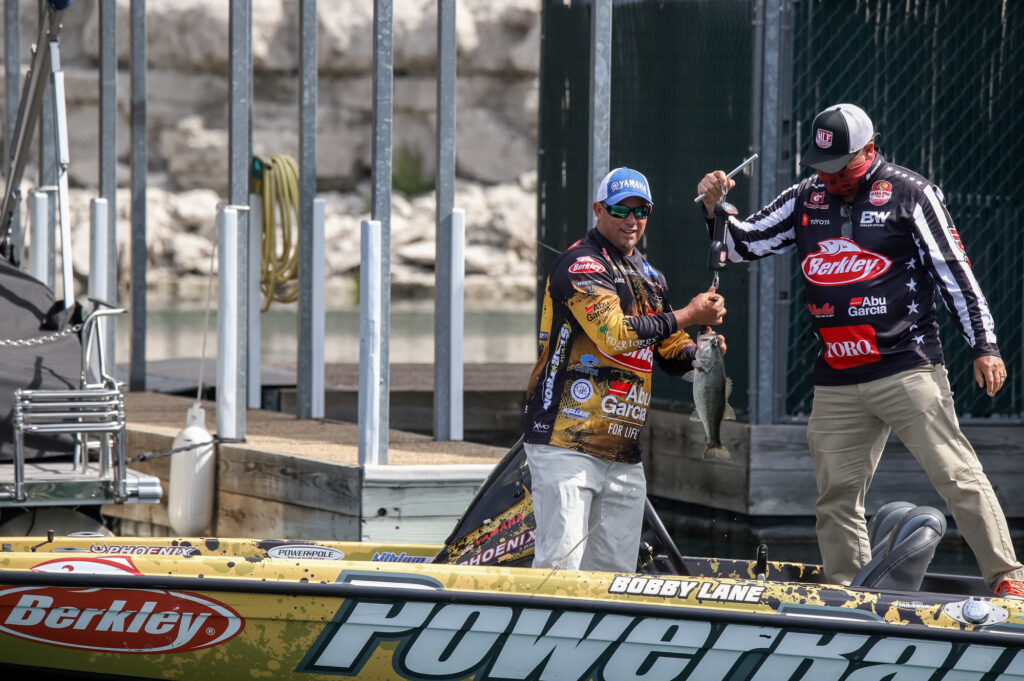 The six-day tournament, hosted by the Austin Sports Commission, featured 80 of the top professional anglers from around the world competing for a purse of $805,000, including a top cash prize of $100,000 to the winner.

The top eight pros from Tuesday’s Knockout Round that will compete in Wednesday’s Championship Round on Lake Travis are:

“Man, am I excited to be going to my second straight Championship Round in Texas,” said Lane, who finished in 10th place at the season-opening Bass Pro Tour event at Sam Rayburn Reservoir. “Last year it seemed like I finished in 11th and 12th place all year long, but this is a new year and Bobby Lane is heading to his second straight Championship Round.”

Lane said he caught his fish Tuesday fishing the outside of marinas, mainly targeting docks and rocks.

“The key to my success so far this week has been my equipment,” Lane said. “I’m using the new (Abu Garcia) Veritas, 7-foot, medium, and this rod has been absolutely phenomenal. I love it. I’m fishing a wacky-rigged Berkley PowerBait (MaxScent) General worm (green-pumpkin) with a size 1 hook and a nail weight right in the head.

“I’ve got 10-pound braided line and I’m using an 8-pound-test Berkley 100% Fluorocarbon leader,” Lane continued. “I’m using a very long leader – around 14-foot. Fishing here on Lake Travis you’re going to break off, you’re going to get hung on the cables and you’re going to have to re-tie quite often. The longer leader allows me to re-tie more quickly and efficiently.”

Second-place angler Academy pro Jacob Wheeler of Harrison, Tennessee, was much more optimistic after his day on the water, Tuesday, than he was after only boating two fish in Monday’s Qualifying Round.

“It was a good morning, and a really tough afternoon – just as it has been the last few days – but we got it done and I’m so thankful for those quality bites this morning,” Wheeler said. “If I can get at least 10 keeper bites tomorrow, I think I’ll have a shot at this thing. I’m going to have to generate some big bites, though, so we’ll see what happens. I’m looking forward to going to the Championship Round. This feels good after yesterday’s struggles, so I’m ready to get after it tomorrow.”

Third-place pro Brent Ehrler of Redlands, California, also made the Championship Round in his second-straight event after a ninth-place showing at the General Tire Heavy Hitters all-star event last month.

“I left a fair amount of water today that I didn’t fish, so I’ve still got some stuff left to fish tomorrow,” Ehrler said. “I got kind of lucky today. I had a couple of key bites that really helped me get to where I’m at right now – over that 20-pound mark. I don’t know if I’ll be able to get those again tomorrow; they were kind of single fish. I found an area that had a few fish that had moved up – I’d already fished it earlier in the week – but a few more had moved up. I don’t think I can go back and catch those fish again. I’m going to have to bob and weave by the minute tomorrow, and hopefully I’ll have a chance at winning this thing.

”Rounding out the top 40 finishers were: