Brandon Perkins is the Hometown Hero on Pickwick Lake.

COUNCE, TENNESSEE – With his smallest bag of the event on the final day, Counce, Tennessee’s Brandon Perkins takes the win on his hometown Lake Pickwick with a three-day total of 55-pounds, 11-ounces. Adding 16-pounds, 10-ounces to his already 7-pound lead to begin the final day, Perkins managed an 8-pound margin of victory. 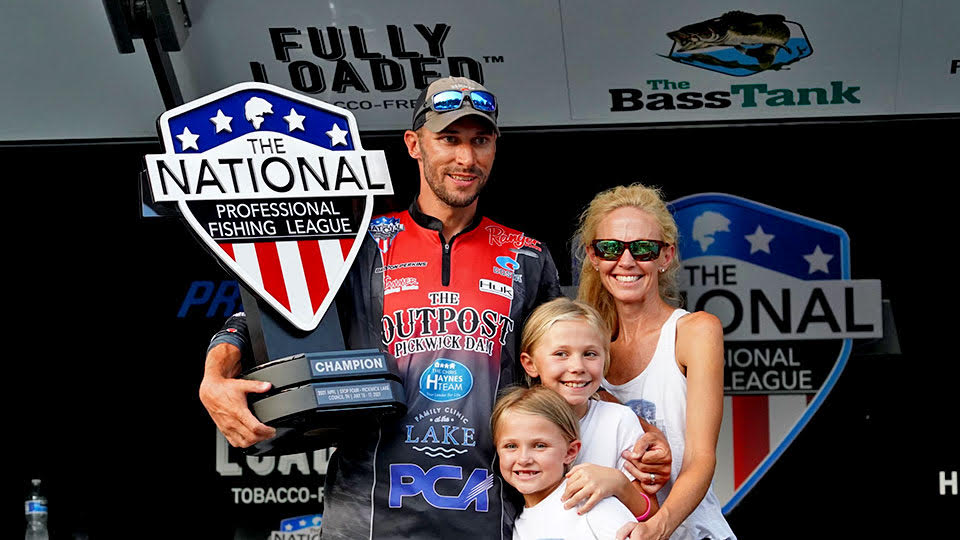 Emotional on stage yet again, Perkins had this event circled since the moment the schedule was released, and wanted nothing more to take a win for his hometown crowd.

“Thank you all so much. The money doesn’t even matter, I’m not going to get it anyways,” laughed Perkins (looking at his wife). The trophy, heck, not even the trophy, the support I have been given this week is way better than any trophy I could get. Regardless, the good lord has blessed me this week more than I already deserve.

Fishing offshore ledges all week on Pickwick, Showdown Saturday didn’t go as Brandon Perkins has hoped. Getting off to a semi fast start this morning, things quickly turned south for the local angler.

“I caught a limit early which helped me calm down but after that I did everything I could to make it stressful,” laughed the Counce, Tennesse angler. “I lost fish all day long, I was a wreck.”

Things got better and worse as the day continued. At the last spot of the day, a few casts and a few lost fish added to the stress.

“I saved a pile of brush piles and the weather wasn’t even good for it so I didn’t bother. I made a run to another spot I saved and got there and it was covered with a few boats. I got down to that last stop and pulled in. First cast, I lost a 4.5-pounder at the boat, it was in my hands.”

That wasn’t the worst of it. Three casts later, another 3.5-pounder jumps off. Then, like it was meant to be, Perkins was able to wrangle a 3.75-pounder to the boat and it culled a small fish. Fishing a power technique, Perkins used an unnamed spoon all week and notes the grind it has been.

“I am going to need a week to recoup after this tournament. I have been fishing crazy and violently. I don’t know if it is my rotator cuff or what, but my arms are sore.”

Gaston started his day with a big fish and another decent fish but the bite slowed down drastically after the morning flurry.

“It took me a lot longer to catch a limit than I thought but this afternoon when live went off, I culled a few times and ended up doing okay.”

Fishing a chatterbait shallow, and a jigging spoon deep, Gaston mixed it up all week and has done enough to move the Progressive AOY Standings around a bit. Starting the event in the top five, he will be the highest finisher of those anglers and will look to continue that effort at the next two events.

“I have never been to Winnebago and I’ve been to Grand Lake once, two years back. To be honest, I am not looking forward to either of those events, I think they are going to be tough, and I don’t like fishing in tough tournaments.”

“Today was better than the last two days weight wise and I started this morning where I caught them yesterday. It took a look longer to catch a limit than I had thought but I could see them out there and I waited them out.”

With 13-pounds in his bag when he abandoned the spot that has been so good to him, Willert made a move which turns out to be the key decision on the final day.

“I pulled up and there were a ton of fish. I ended up catching the biggest fish of the day and culled a few times too. That got me to my weight. I had a great practice and I thought coming in to the event that I had a shot to win. I fished confident and it worked out.”

Although the Prior Lake, Minnesota pro feels confident offshore using his electronics, ledge fishing is actually new. Willert had never ledge fished before this event and he adapted quickly.

“My goal this year was to cash checks, not because of the money, but to stay consistent and be around in the Progressive AOY race. I should move up some after this event and looking ahead, I should be in my wheelhouse at the next one, and although I have some history with Grand Lake, I have never been there in the fall and I don’t quite know about that one yet.”

With consistent bags all week, Timmy Reams brought 17-pounds, 3-ounces to the scales on Showdown Saturday to finish the event in 4th place. The Morgantown, West Virginia angler weighed a 6-pound, 9-ounce bass to anchor his bag. Fishing a grass bed all three days, Reams worked a reaction bite to secure his top five finish.

“I was down near the power plant and I found one stretch of grass and I milked it for three days for all it was worth. I don’t know if the fish live there or if they move in and out from the ledges to feed, but I fished a jackhammer for three days.”

On days one and two, a white jackhammer was the ticket, but Reams noted the switch to bruised green pumpkin helped him catch his biggest bag of the event. Using a ½ ounce chatterbait, Reams broke out a wacky work early on the final day to secure a limit.

“I had to get a quick limit and they bit the wacky worm good. Coming into the event, I knew I had found some fish but had no idea it would hold up for three days. I was sharing some water with David Gaston and it worked out for both of us. I want to thank some sponsors – Henny Rods, Deep Creek Docks, High Mountain Off-Road and SPE Motorsports.

With a three-day total of 46-pounds, 15-ounces, Marc Schilling add 16-pounds, 8-ounces to his total to end the tournament in the 5th place spot. With bags of 9-pounds, 14-ounces, 20-pounds, 9-ounces, and todays weight, Schilling relied on a 6-pound, 9-ounce kicker on day two to anchor his tournament. Schilling was cranking ledges with a 10XD Strike King Crankbait to catch his fish.

Starting the day in the second spot, Shawn Murphy weighed his lightest bag of the event in on the final day. With 12-pounds, 13-ounces, Murphy had a three-day total of 44-pounds, 8-ounces to finish in the 6th place spot.

“Today was really a grind for me. I have been catching 25 to 30 keepers a day and today I only got 9 bites. I have no idea why other than maybe the little breeze and overcast had them spread out more. I could see them it was just tougher to get bites.”

Sticking with his area for most of the day, rotating in and out all day, finally Murphy was able to get some fish to bite. Stroking a ¾ ounce football jig, the Nicholasville, Kentucky angler got it done and kept himself in contention. Coming into the event, Murphy had anticipated 13.5-pounds a day would get paid and didn’t see the tough event coming.

“I really didn’t think the like would fish this tough. Its going to be around 10-pounds a day to get paid and I guessed a lot more. I thought I had enough schools located where I could catch them but I wasn’t sure because I didn’t fish anything in practice. I am thrilled with a top ten and looking forward to taking the points and getting to the next event. I want to thank my sponsors – Day’s Boat Sales, Central Kentucky Sonar, Vexus Boats, Mercury Marine, Power Pole, Shimano, and Lowrance.

The Rest of the Best: