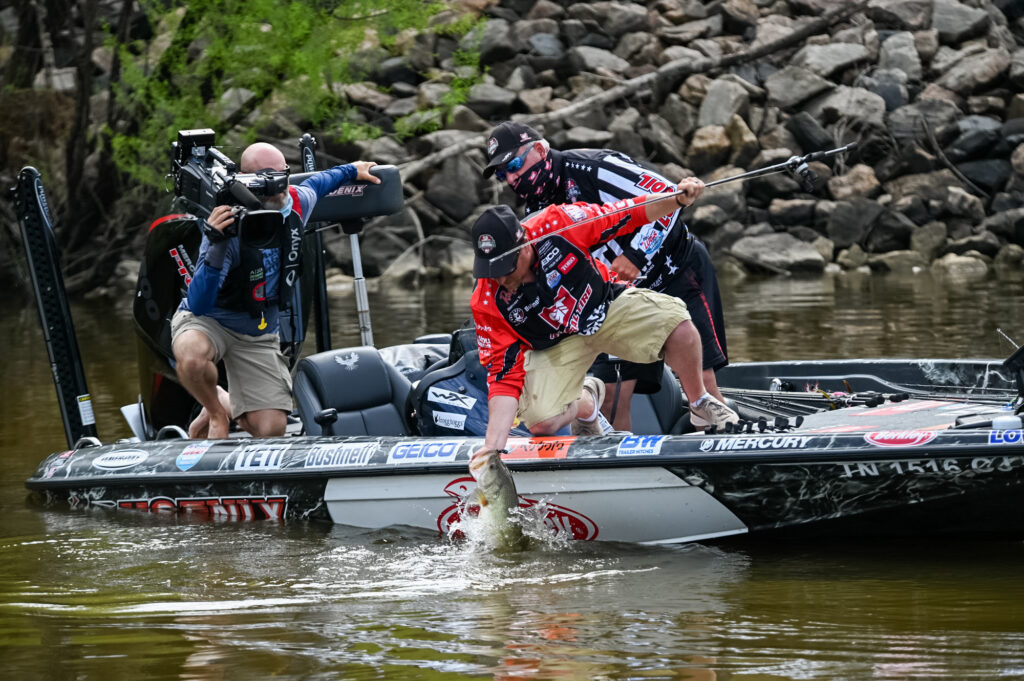 Sunday will be the third day of competition in the six-day all-star tournament that showcases 40 anglers that qualified from the 2020 Bass Pro Tour season competing for more than $535,000, including a top prize of $100,000, and Big Bass Bonuses with payouts of $25,000, $50,000 and $100,000 being awarded for the single biggest fish in the Qualifying, Knockout and Championship rounds.

“Today was a pretty good day, but I’m glad it’s over because I am tired and starting to cramp up,” said Thrift in the post-game interview. “Every bass that I caught today came from the same vicinity. I left for a couple of hours and tried to get bit elsewhere, but I never could put anything else together. I came back in here about midway through the third period and that was the end of it.”

Thrift credited two baits as being the key to his day.

“I caught all of my fish today on two baits – a white frog and a 5-inch black-and-red flake-colored Damiki Stinger,” Thrift said. “I threw the frog on my Signature Series 7-foot, 2-inch, medium-heavy Fitzgerald Frog rod, paired with an Abu Garcia Revo STX reel and spooled with 50-pound P-Line TCBX braid.

“For the Stinger, I fished it Texas-rigged and weightless,” Thrift continued. “I like throwing the weightless Stinger on a baitcaster, rather than a spinning rod. It flies through the air very streamlined, and you can use a little bigger line and can get a better hookset. This allows me to get it into tighter places and a little thicker cover and not worry about breaking fish off.”

Stephen Browning was enthusiastic about his day on the water Saturday, excitedly talking about how he went “old-school” to catch his 11 fish.

“I got to fish in my wheelhouse today, the way I like fishing – kicking up the mud with the trolling motor and getting way back in the super-skinny water,” Browning said. “It was just my day, today. There was a timeframe right near the beginning of the second period where I struggled a little bit, but for the most part I made good moves all day.

“The fish were sitting in about 18 inches of water, and I went old-school on them,” Browning continued. “My equipment wasn’t old-school – I used a 7-foot, 4-inch St. Croix Legend heavy rod with a Lew’s Tournament Pro reel and 20-pound Gamma line, but just threw an old-school tube. I used a 5/0 Owner hook, and green-pumpkin and black and red flake were good in the morning, while green-pumpkin was better in the afternoon. It had to be a real subtle presentation.”

Third-place angler Cliff Pace credited his decisions on the water for his strong performance as well.

“Today is the best day that I’ve had since I’ve been here, so anytime that you can say that you have to be happy,” the Mississippi pro said. “I just had one of those days where pretty much everything I did worked. Every decision I made paid off in some way or another. I just kind of rolled with the flow today and was fortunate enough to continually just catch some throughout the day. I can’t complain, at all.”

Overall, there were 111 bass weighing 356 pounds, 8 ounces caught by the 20 pros on Saturday, which included six 6-pounders, nine 5-pounders and twelve 4-pounders caught from Falls Lake.

Coulter weighed in the biggest bass of the day, a 6-pound, 14-ounce largemouth that he caught flipping a jig during Period 3. If Coulter’s fish remains the largest bass weighed by Group B after the conclusion of their Qualifying Round on Monday, he will take home a $25,000 Big Bass Bonus. Big Bass Bonuses are awarded throughout the competition, with payouts of $25,000, $50,000 and $100,000 being awarded for the single biggest fish in the Qualifying, Knockout and Championship rounds

The 20 Anglers in Group A compete in their two-day qualifying round on Jordan Lake on Friday and Sunday – the 20 anglers in Group B on Falls Lake on Saturday and Monday. After each two-day qualifying round is complete, the anglers that finish in 2nd through 10th place from both groups advance to Tuesday’s Knockout Round on Shearon Harris, while the winner of each group advances directly to Wednesday’s Championship Round on Shearon Harris. In the Knockout Round, weights are zeroed and the remaining 18 anglers compete to finish in the top 8 to advance to the Championship Round. In the final day Championship Round, weights are zeroed and the highest one-day total wins.