“I was fishing in and around some grass,” Scalish said. “I had to downplay what I was catching because there were a few other guys nearby who’d swoop in given a chance.” 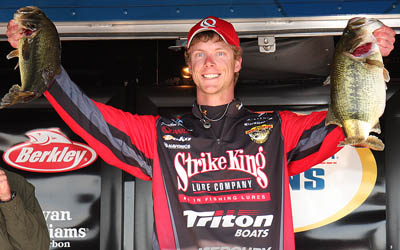 In third place is Kalamazoo, Mich., native Jonathon VanDam, who hauled in 21 pounds, 12 ounces. VanDam is the nephew of four-time Toyota Tundra Bassmaster Angler of the Year Kevin VanDam, also of Kalamazoo. Ryan Park of Mount Joy, Pa., is in fourth with 21-10, and Dave Mansue of Robbinsville, N.J., is fifth with 19-9.

Scalish’s good practice left him more optimistic than most competitors about what sort of weight would take the day.

“I knew that if I could have these few areas to myself that I could get anywhere between 17 and 20 pounds,” he said. “I have a few more spots for tomorrow, but while it’s nice to be leading now, I wish today was Saturday.”

Richardson, out of Ontario, Canada, brought in the only limit composed strictly of smallmouth bass, with the largest being 5 pounds, 11 ounces. 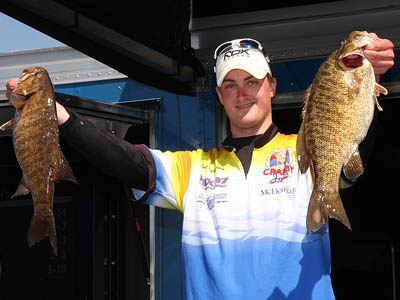 “I hope the weather stays cold like it was today so that the smallmouth bite keeps up, otherwise some of the largemouth guys will have a chance to catch me when that bite turns on,” Richardson said.

Richardson is using a custom lure made by an Ontario bait maker, but would not reveal what type it was. Believing his spot to be prime real estate for tomorrow as well, he didn’t disclose details of the area.

On the co-angler side, Ed Guidon of Bethlehem, Pa., found 16 pounds of Chesapeake Bay largemouth, enough to hold off Thomas Nolf of Pittsburgh, Pa., in second place with 15 pounds, 3 ounces. Guidon and Nolf were the only co-angler’s who managed a five-fish limit on Day 1.

Co-anglers will compete in the Opens for the top prize of a boat/motor package valued at $32,000. After Day Two, the field will be cut to the top 30 pros and co-anglers, who will advance to Saturday’s final day of competition.

Fans are invited to the Open’s daily takeoffs and weigh-ins through Saturday at Anchor Boats Marina, 36 Iroquois Drive, North East, Md. Anglers will launch their boats at 6:15 a.m. ET and the weigh-ins are scheduled to begin at 2:20 p.m.

All activities are free and open to the public. Fishing fans can also follow the action on Bassmaster.com with live, streaming video of the weigh-ins, photo galleries and more.

The next stop in the three-tournament Northern Open division is the Aug. 20-22 event on Lake Champlain out of Plattsburgh, N.Y.