LA CROSSE, Wis. (Aug. 19, 2021) – While low water levels have equaled tough fishing conditions for most anglers at the Major League Fishing (MLF) Tackle Warehouse TITLE Presented by Mercury – the Pro Circuit Championship, Presented by Bad Boy Mowers – pro Miles Burghoff of Soddy-Daisy, Tennessee worked those conditions to his favor, bringing a five-bass limit to the scale on Thursday weighing 14 pounds, 13 ounces. Burghoff’s two-day total of 26-8 earned him the win by a mere 1-ounce over Favorite Fishing pro Zack Birge of Blanchard, Oklahoma and punched his ticket straight through to Sunday’s Championship Round. Birge’s limit of 14 pounds, 4 ounces gave him a two-day total of 26-7 to finish the Group A Qualifying Round in second place. 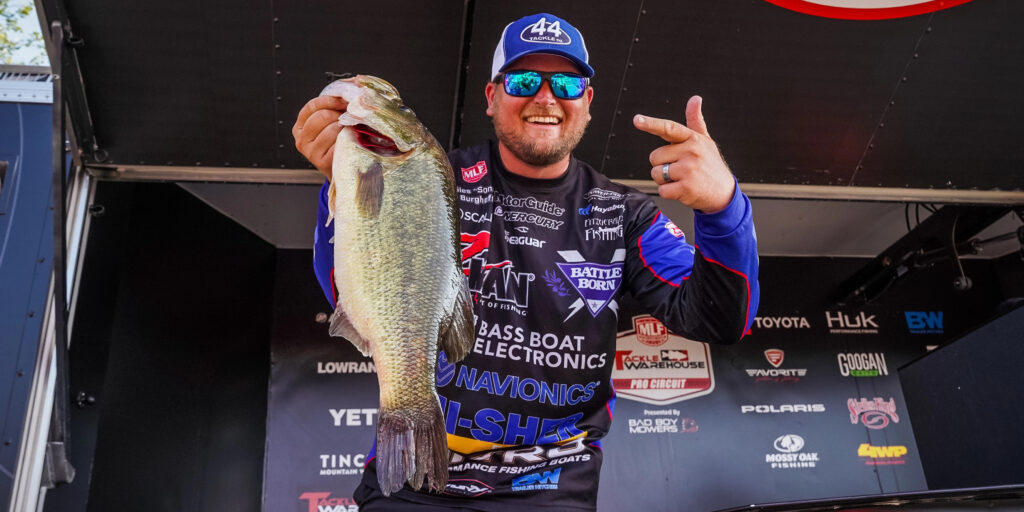 The top 10 anglers from Group A will now have an off-day Friday, while the 25 anglers in Group B will complete their two-day Qualifying Round of competition. The Knockout Round, featuring 18 anglers competing to finish in the top eight, will take place on Saturday. Sunday’s Championship Round will feature Burghoff, Friday’s Group B winner and the top eight anglers from the Knockout Round competing in a one-day shootout to catch the heaviest five-bass limit for the top prize of up to $235,000.

The six-day event, hosted by Explore La Crosse, showcases the top 48 pros in the 2021 Pro Circuit standings, along with last year’s reigning TITLE champion and reigning Angler of the Year – all competing for a purse of nearly $900,000.

“Today was pretty special,” the Tennessee pro said. “With a near two-hour fog delay, I didn’t have a whole lot of time to fish. I’m making the longest run out of anybody here, from what I understand, and I was able to make it happen even with a short day.”

Burghoff’s limit was anchored by a 5-pound, 11-ounce kicker largemouth – a giant for late August on the Mississippi.

“When I said early on in the week that I didn’t want to catch a big one during the Qualifying Round, that was the truth,” Burghoff said. “In this format, you can’t burn a fish like that in the early rounds. So, when I caught it, I knew I had to win the round. I worked really hard today. But I let up on them and gave up about an hour that I could have culled up a ¼ pound, so I was really sweating that decision in the weigh-in line. Being able to not have to beat up on those fish another day and save them for the Championship Round is key.”

Burghoff estimated he caught 40 fish throughout the day, Thursday. He declined to divulge any bait- or technique-specifics but did hint that the low water level is helping him.

“I’m fishing in Pool No. 9, but I can’t just go anywhere – it’s not like (Pool) nine is fishing better. I just found a good area,” Burghoff said. “I caught my limit in six casts this morning and culled six or seven times in 30 minutes, but I only had 9½ pounds. Then I started searching some areas. I caught the big one, then never made another cast and left immediately. I found three more areas that are pretty stacked with fish – not every-cast type deals, but the type of deals where I can go there and catch a couple.

“The biggest factor for me now is going to be the weekend boat traffic, and the lock,” Burghoff went on to say. “Those are the two big things that could really affect me. I’ve got plenty of fish in that area, it’s just a matter of playing my cards right on Championship Sunday.”

The top 10 pros from Qualifying Group A that now advance to Saturday’s Knockout Round on the Mississippi River are:

Finishing in 11th through 25th in the Group A Qualifying Round were:

Burghoff’s 5-pound, 11-ounce largemouth also earned him Thursday’s $500 Berkley Big Bass Award. Berkley awards $500 to the angler in each group that weighs the biggest bass over their two-day Qualification Round.

The MLF Tackle Warehouse TITLE Presented by Mercury, the Pro Circuit Championship, Presented by Bad Boy Mowers, features a hybrid tournament format. All 50 anglers were seeded into two groups of 25 – Group A & Group B, based on points earned in 2021 qualifying events – where they competed in Qualifying Rounds over the first four days of the tournament. Group B will fish again on Day 4, with total weight determined by the cumulative weight of their biggest five-bass limit from both days.