Mississippi angler Roy Byrd has never painted cars, but he’s had a serious hand in the assembly of thousands of quality Toyota vehicles as a dedicated manufacturing plant employee the past 25 years at Toyota facilities in both Kentucky and now Northern Mississippi. 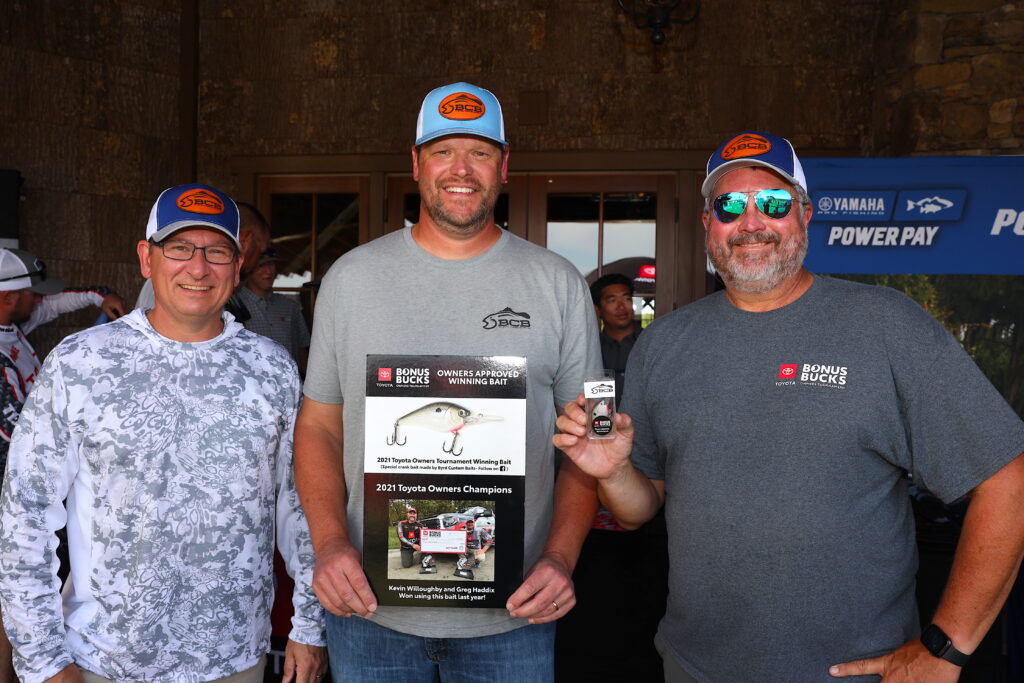 But when Byrd’s not working for Toyota, he’s either supporting his sons’ sporting events or custom painting crankbaits, like the one his fellow employees Greg Haddix and Kevin Willoughby used to win last year’s Toyota Bonus Bucks Owners event on Table Rock.

Byrd works each day to make sure parts make their way from trusted vendors to the plant, and ultimately on to the assembly line that produces roughly 700 Toyota Corollas a day, thanks to 2,753 American workers at the plant in Blue Springs.

At home however, the assembly line at Byrd Custom Baits typically involves a staff of just three that includes his wife of 23 years, Tonya and their son Mason, who’s as good with an airbrush as dad.

Together, for last month’s Bonus Bucks tournament, they painted 750 identical Byrd Baits so that every single participant received one as a gift in the color “old school shad” to match the winning lure from the previous year’s event, a Byrd 1.5 Deep Diver that reaches depths of 8-feet.

“I joked that we’d never paint another ‘old school shad’ colored bait the rest of our lives after painting all those,” grins Byrd. “But seriously, the satisfaction of seeing the lures we made being gifted to all those Toyota owners at Table Rock was pretty darn special,” says Byrd, who also makes duck and turkey calls.

The 49-year old who grew up in Albany, Kentucky near famed Dale Hollow Reservoir is the product of a family who has hunting and fishing in their DNA, so it’s no surprise Byrd’s made the outdoors a huge part of his life too – including being an officer for bass clubs comprised of Toyota manufacturing plant employees in both Kentucky and Mississippi.

He has no aspirations of turning his paintbrush hobby into a full-fledged business, it’s truly just a hobby, and a way of putting smiles on the faces of a few anglers who pay him to put his custom touch on their favorite baits.

“One of the gentlemen who fished in the Bonus Bucks event at Table Rock last month caught several bass and a walleye on the crankbait we gave everybody as a gift, so he called and asked me to paint him a few more to fish with near home in Alabama. Stories like that are why we do it. It’s mostly for the fun, not the money,” concludes Byrd with a heartfelt smile.

Whether it’s a hands-on role in the quality assembly of 700 Toyota Corollas each day, painting 700 shad colored crankbaits, or just a small handful for a fishing buddy, one thing’s for certain … passion, perfection, and fun are the key ingredients to everything Roy Byrd touches.

To learn more, check them out at Byrd Custom Baits on Facebook, and to sign-up for Toyota Bonus Bucks visit https://www.toyotatrucksbonusbucks.com/.