Carson Finds a Little Magic on Lake Winnebago to Hold on to the Day Two Lead.

Keith Carson added 15-pounds even to his day one weight of 15-pounds, 3-ounces for a two-day total of 30-pounds, 3-ounces. Similar to his win at Wright-Patman earlier this year, Carson has unlocked a shallow pattern that relies on fishing around flooded timber – in this case, a “magic” willow tree. 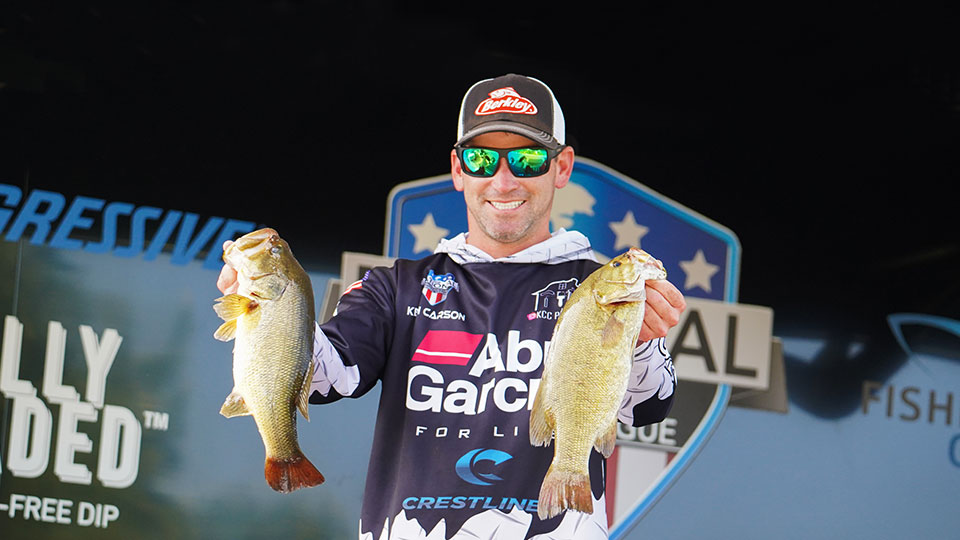 “I have one tree, its alive but has fallen in and there is an exact flip to get bit. I caught two 3-pounders on the tree and several other smaller fish.”

By letting his tree rest, Carson works the adjacent flooded trees and is catching quality other than just “the tree.” The tree features a mat of eel grass on the front with lots of shade. The plan for tomorrow is more of the same and Carson is looking forward to showdown Saturday.

“Without that tree, I can still catch some fish, I think around 10-pounds. There are a lot of 2.3 and 2.4-pound fish around. I am looking forward to swinging on them tomorrow.”

With a change in weather coming, Carson knows there is a chance of thunder storms and some stronger winds. The other factor – the Wolf River.

“The change tomorrow is the guys who are going up the Wolf River. If those guys don’t make the long idle up to their fish, I could have more guy’s fishing around my areas and I need to have the ability to fish free and let my areas rest.”

Noting he had another competitor fish his area today, more pressure would not be good for his chances of winning his second NPFL event of the season. The Debary, Florida pro is working through two set ups to fish his trees. The first, a 7’6” Abu Garcia Fantasista X, heavy action rod, and the second, an Abu Garcia Zenon, both new rods for 2021.

Adding 13-pounds to his day one total of 14-pounds, 5-ounces, Buck Mallory worked the same areas and carries a two-day total of 27-pounds, 5-ounces to showdown Saturday in the 2nd place spot. With a 4-pound, 2-ounce lunker to anchor his bag, the Lawton, Michigan pro is rotating through a flipping bite for largemouth and tossing a dropshot rig for smallmouth.

“It was another solid day, basically the same day as yesterday, I fished the same stuff. The difference is, I didn’t leave my fish today. My deal is flipping shallow docks and grass and then moving to current breaks for smallmouth. I am using a Strike King Black/Blue Rage Bug on the flipping rig and Strike King Z-Tube on a dropshot.”

Adding 14-pounds, 12-ounces to his day one weight of 12-pounds, 9-ounces, Paul Browning sits in the 3rd Spot with a two-day total of 17-pounds, 5-ounces. Noting a slight change in his timing this morning, he was on the same fish yesterday and opted to leave a bit early on day one.

“Yesterday, I left the fish too soon and went to the lake. Today, I stayed with them and caught a bigger bag. I am fishing for largemouth and I am making a run to a different lake. I just have a couple grass edges and I am flipping to get a limit.”

Having had a limit by 9:30am both days, the Pecos, Texas angler also has a pattern that he is saving for showdown Saturday, but did sample one area later in the day and made a key cull.

“I have some wood I found in practice and checked one piece today, and it look right. I caught one fish that culled and lost another one that felt heavy. For my flipping deal, I am using a Denali Rods N3 7’8” Flip Extra Heavy action paired with a Daiwa Tatula Elite Pitch and Flip. It’s spooled with Seagar Abrazx.

Making a comeback on the second day, Marc Schilling added 15-pounds to his day one weight of 12-pounds, 14-ounces for a two-day total of 27-pounds, 14-ounces. Schilling is fishing close by to leader Keith Carson and noted the two are respecting each other’s areas.

“Keith and I have different main areas and we are staying off each other’s stuff. I also want to give a big shout out to Robert Terkla today. He came around the corner today and asked if he could fish around me. I told him it was my main deal and respectfully allowed me to keep doing what I was doing – hats off to Rob.”

With an increase in weight today over the first day, the Tombean, Texas angler says more time in his main area today led to the success.

“I got to spend more time here today and pick it all apart. I am catching mainly largemouth but I did get a good smallmouth there too. I have some smallmouth I found in practice but they have not been there when I have checked it so far this event.”

With a total weight of 27-pounds, 1-ounce, Donnie O’Neal added 13-pounds, 4-ounces to his day one weight of 13-pounds, 13-ounces to finish the day in the 5th spot. Not feeling 100% on day one, O’Neal made quick work of his day one limit and had hopes to do the same again this morning.

“It took me longer today – I had a limit by 8:30am but I stayed and leaned on them pretty heavy today. I left it at 1:30 pm and culled 4 times between getting my limit and getting to my weight today.

Making a long run, the Liberty Hill, Texas angler is working a topwater frog in an isolated stretch of shallow vegetation but neglected to give away any specifics to his deal.

“I found one spot in practice and knew I had to try and manage it all week. I had five bites yesterday and several more today. I think I can get 10 to 12-pounds tomorrow but I don’t think I can win off the spot. I am feeling better but I still checked in early to get some rest.”

Check out the complete Live Leaderboard.
Visit the Day Two Blogs & Galleries for a recap of the action.

Join us for Showdown Saturday as the LIVE BROADCAST resumes at 8am CST on Lake Winnebago.