Casey Ashley Says Don’t Put the Popper Down this Summer 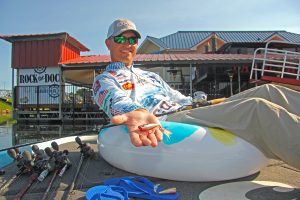 And while both Casey and Kenny are prone to celebrate life with best friends and a cold beverage, you can count on Ashley to tie on a topwater popper in late spring and never put it down all summer. In fact, the hotter, the better for topwater poppin’ as far as the Lake Hartwell guru is concerned.

“Anytime the water temp is above 75 degrees, I absolutely don’t leave the dock without a popper,” says the South Carolina native. “And where I’m different than a lot of anglers is I’ll throw it all day long, on the hottest days of summer.”

Ashley makes a great point. While throwing a topwater in the lowlight hours of sunrise or sunset is as commonplace as a beer can koozie at a Chesney concert, most anglers disregard its effectiveness almost completely once the sun gets bright.

“The very best time of day to throw a popper is actually at midday between 11:00 a.m. and 3:00 p.m. for one simple reason – that’s when shadows are most prominent,” emphasizes Ashley.

“In fact, every truly big bass I’ve ever caught in a tournament on a popper has been during midday, but shadows are the whole key. You have to learn to think of shadows as another form of cover for big summertime bass.”

Ask Ashley to prove his point, and his memory is razor sharp of exact tourneys where the popper pulled him to the top of the leaderboard.

“Right off the top of my head I remember catching ‘em all day on a popper during that super hot tournament in Little Rock on the Arkansas River when Denny Brauer won, and another was when I did really well at Toledo Bend by catching four and five pounders on it all day around wooden sea walls,” he recalls fondly.

“My all time favorite was the Excalibur popper, but they don’t make it anymore, so now I throw the Booyah Boss Pop,” says Ashley who is not sponsored by Booyah.

“I tie it to 12-pound mono, and the rod and reel you use is really key because you’re trying to make super accurate casts with a really light lure around shaded objects in tight places,” he emphasizes.

“I use a 6’ 9” Quantum G-Force rod with a really soft medium action tip, and I like the slightly smaller spooled, really compact, Quantum Vapor reel, because I feel like it helps me throw that super light bait a lot easier,” he explains.

“The deal is you’re probably going to get more bites in the morning, and then the action slows on a topwater, so people often put it down and do something else the rest of the day. But the biggest bites on a popper are going to come once the shadows become more prominent. So keep casting it all day – right through the hottest part of summer,” concludes the longtime Chesney fan.