FORT WORTH, Texas — The 54 anglers competing in the Academy Sports + Outdoors Bassmaster Classic presented by Huk had planned to start fast and take advantage of an early-morning shad spawn bite that has been extremely reliable this week on Lake Ray Roberts. 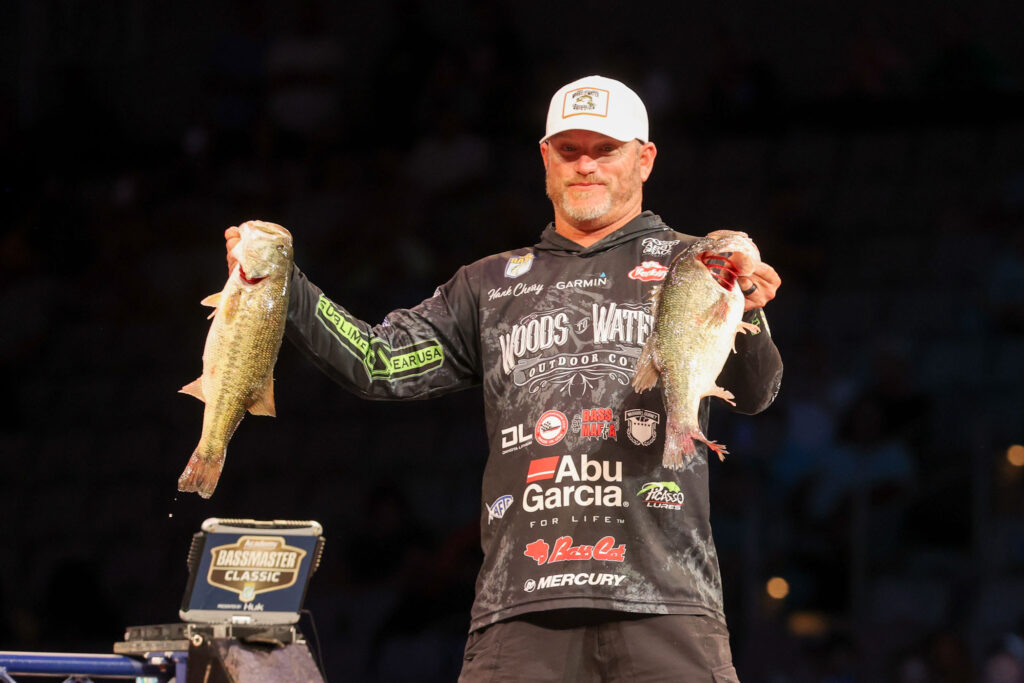 But Mother Nature threw up an electric stop sign.

Freak thunderstorms with dangerous lightning delayed the tournament by more than two hours and negated much of the morning bite. While many of the Day 1 leaders struggled, North Carolina pro Hank Cherry landed 17 pounds, 10 ounces to move from third place into the lead with a two-day total of 37-14.

The winner of last year’s Classic on Alabama’s Lake Guntersville, Cherry will now begin Championship Sunday with nearly a 5-pound lead and a chance to become only the fourth angler in the 51-year history of the event to claim back-to-back titles.

“There was definitely more pressure to win the first one last year,” Cherry said. “Winning is one thing, but to win it twice, it’s got to all go right.

“What’s eerie about this is that it’s the same feeling as last year. I’m out there on the dam today and people are stopped all the way down the dam getting out watching me fish — it just feels the same.”

Despite the late takeoff, Cherry got off to a fast start, catching two bass in the 4-pound range flipping a jig into wooden structure. The fish came only four or five casts apart and gave Cherry the shot in the arm he needed to fish confidently all day.

That was especially important when he lost a big bass later in the day on a jerkbait.

“Of course, Day 2, in Hank Cherry fashion, I lose the biggest fish I’ve hooked in the two days of competition and it breaks me off on a jerkbait,” Cherry said. “I don’t know how big it was, but I’ve caught thousands of them on a jerkbait and I know when they bite how big they are. When I set the hook, it didn’t move. When it started diving down, I knew it was gonna go right to the rock and brush.

“It would have been a great fish to have, but I didn’t let it bother me.”

Cherry said he’s taking the same approach with the pressure of leading the Classic once again going into the final day.

“I’ve played in a lot of big games,” Cherry said. “I’ve won this big game — and I’m not going to cry if I don’t win it tomorrow.

“I’ve got my trophy at home. I’ll hand the trophy to the winner tomorrow and go hard at it again next year.”

The biggest mover of the day was B.A.S.S. Nation qualifier Justin Kerr, who rose from 22nd place to second with four bass that weighed 19-12. Kerr put together the day’s biggest limit flipping submerged bushes and using an Evergreen JackHammer ChatterBait.

Though his bag was one shy of a limit, one of his bass weighed 7-2 and another weighed 6-12.

“I have this one area that has a bunch of big ones in it, and I got two bites there yesterday and lost one of them,” Kerr said. “Today, with the half day that we had, I was hoping for two bites that would put me in the 11-pound range, but they just happened to be 7-pounders.”

An Arizona resident and longtime successful angler in the western United States, Kerr has not been exploiting the early-morning shad spawn bite like much of the field. That’s a big part of why he weighed in only a small five-bass limit (13-6) on Day 1 and missed a limit on Day 2.

But he believes he’s around the bass to win — he said he’s seen another bass in the 10-pound range this week — and he realizes the gravity of his situation.

Kerr is vying to become just the second Nation qualifier ever to win professional fishing’s biggest event. Connecticut angler Bryan Kerchal claimed the title in 1994 on North Carolina’s High Rock Lake but was killed in a plane crash months later.

“To represent the Nation this way is an awesome deal,” he said. “It shows that people like me who don’t get the opportunity to fish the Elites or get on tour because of financial or personal reasons … It doesn’t matter who you are, you can get a chance to compete in the Classic.

“It’s a pretty humbling experience to be in this position, for sure.”

Perhaps no one was hurt more by the late start than Auburn, Ala., pro Steve Kennedy.

After catching a big limit of 23 pounds — mostly before 7 a.m. — on Day 1, Kennedy managed just four bass that weighed 9-11 Saturday and tumbled to third with 32-11. He said he plans to spend all day on Championship Sunday fishing for deep suspended bass he found in practice.

He lost a bass he estimated at 8 pounds fishing that way Saturday.

“It was on a jig on standing timber out in the middle of the lake,” Kennedy said. “I got him to the boat without a problem, and the way I remember it, he just kind of laid there for a second like he wasn’t even going to fight. Then he took off and pulled off. Huge fish.”

Though Kennedy had major success fishing the early-morning shad spawn bite on Day 1, he said he may mostly forego that action Sunday to target those big suspended bass.

“I may spend 30 minutes up shallow,” Kennedy said. “But I’ve had this other deal in my back pocket, and you only get so many chances like this. There aren’t big numbers out there, but those big females are there.

“Those are the ones I want to fish for.”

Frank Talley of Temple, Texas, still holds the lead for Berkley Big Bass of the week with the 8-3 largemouth he caught on Day 1. Chad Pipkens of Holt, Mich., came close to topping that mark Saturday with an 8-1.

The Top 25 anglers will take off at 6:15 a.m. CT Sunday from Lake Ray Roberts State Park – Isle du Bois Unit in Pilot Point, Texas. The weigh-in will be held at 4 p.m. at Dickies Arena in Fort Worth.

The winning angler will claim a life-changing title, a $300,000 first-place check and the iconic trophy that only a handful anglers have ever had the privilege to hold.

The final day of the annual Bassmaster Classic Outdoors Expo will be held Sunday from 10 a.m.-4 p.m. Exhibitors are on-site selling a variety of merchandise for fishing, hunting, camping and more. As part of the Bassmaster Classic Outdoors Expo, the Go Out{side} Experience will offer fun options for families, including inflatable archery, cornhole, jumping dogs and knot tying. Kids can even catch their first fish at an on-site catfish pond.

The Bassmaster Classic is being hosted by the Fort Worth Sports Commission and Visit Fort Worth.