CULLMAN, Ala. (May 4, 2019) – It goes without saying that post-spawn spotted bass are unpredictable, finicky and sometimes hard to locate. Throw in capricious weather and you have the makings of a highly unpredictable day of fishing. 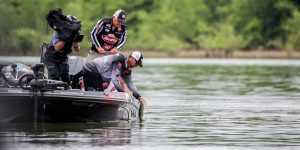 Fortunately for Major League Fishing® (MLF) pro Jason Christie, the location and pattern he identified 24 hours earlier in the second period of Thursday’s Elimination Round at the Bass Pro Tour Phoenix Boats Stage Five Presented by Mercury was anything but unpredictable.
Fishing a shaky head on the same offshore break where he caught the majority of his fish the day before, Christie racked up 48 pounds, 3 ounces of Smith Lake spotted bass during a weather-abbreviated Knockout Round to finish atop the Top 10 anglers advancing to Sunday’s Championship Round.
Christie’s two-day total in the Elimination and Knockout Rounds was 99-3, almost all of it caught out of the small area in 15 to 20 feet of water.
“I started in the same spot this morning that I did good on yesterday, and there was a herring spawn that I think it caused some more fish to come in – it was pretty steady there for awhile in the morning,” Christie said.
The heavy thunderstorm that kept the field on the bank at Smith Lake Park for an extra 90 minutes this morning didn’t seem to affect Christie’s spot at all. While early round hammers Jesse Wiggins and Jacob Wheeler struggled to find fish, Christie put 12 fish on SCORETRACKER® in the first hour and finished the first period with 31-5.
“I got a little frustrated because I lost a few and missed a couple in the morning, but one thing I’ve learned, you can’t count on these fish day-to-day,” Christie said. “They’re moving, the bait’s moving, it’s that transition time of year so they can be hard to predict. I’m just going to start in the best spot I think tomorrow and play it by ear.”
Chapman’s Last-Second Heroics
The Bass Pro Tour has seen some last-minute drama in its four previous events, but none have been as dramatic as the SCORETRACKER® rearrangement caused by the 3-13 largemouth that Brent Chapman swung aboard his boat as time expired at the end of the day. Chapman entered the final minutes of competition in 11th place, but hooked a fish on a creature bait with just seconds remaining, and got the fish over the gunwale of his boat just in time for it to qualify as a scoreable fish.
That fish pushed Chapman past Jeff Sprague and Bradley Roy into ninth place with 31-0.
Brent Ehrler caught a 1-14 with six seconds remaining to claim the 10th and final spot in the final round.
“That’s about as exciting a catch as I’ve ever had in my career,” Chapman admitted. “I don’t know exactly how much weight I needed to make it into the Top 10, but to hook a fish that size and then have to get it in in just a few seconds is a little stressful. But that sums up this whole format. It’s exciting.”
Championship Round First-Timers
Christie will fish his first Championship Round of the 2019 Bass Pro Tour, as will Mark Rose (third with 39-3), Fred Roumbanis (fourth with 36-1), Dean Rojas (eighth with 32-10) and Chapman. They’ll join previous final-round competitors Dustin Connell (second with 40-9), Michael Neal (34-13), Mike Iaconelli (sixth with 34-11) and Todd Faircloth (seventh with 33-7).
One Last Shot at Smith Lake
As Saturday’s competition proved, there’s no such thing as a sure thing this week on Smith Lake. Local pros Jesse Wiggins, Jordan Lee and Matt Lee failed to make the Top 10, and anglers who weighed heavy weights in previous rounds (Timmy Horton, James Watson, Wheeler and Andy Morgan, to name a few) were unable to find dependable patterns or schools of fish during the Knockout Round.
“What Smith Lake has shown us time and time again this week is that we can expect the unexpected,” said MLF NOW! live stream analyst Marty Stone. “Going into tomorrow we think that everybody is fishing for second place because Jason Christie has found the best place – I’ve always said that on a lake, a place will be a pattern every time – and on the outside looking in, Christie definitely has the best place. But we have a weather change coming in, and we’re dealing with spotted bass. I really don’t have a clue what’s going to happen tomorrow, other than it’s going to be exciting.”
When, Where & How to Watch
Competition begins on Championship Sunday at 6:30 a.m. CT, with live, official scoring available via SCORETRACKER® on MajorLeagueFishing.com and on the MLF app. The MLF NOW! live stream starts at 9 a.m. CT, with live, on-the-water coverage and analysis provided by Chad McKee, JT Kenney, Marty Stone and Natalie Dillon until lines out at 2:30 p.m. The Berkley Postgame Show – hosted by Steven “Lurch” Scott – will start at 4 p.m.
The Day’s Results
To see all results from the Knockout Round, visit MajorLeagueFishing.com and click “Results.”
About Major League Fishing