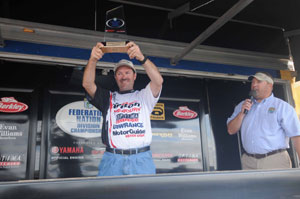 Roanoke Rapids, N.C. — While carrying out plans to host the BASS Federation Nation Southern Divisional presented by Yamaha Outboards and Skeeter Boats this week, April 1-3, Chuck Murray of Louisburg, N.C., squeezed in some time to put together a winning pattern for the event as well.

After holding on to the runner-up spot for the first two days, Murray caught four bass Friday to clinch the tournament with an overall weight of 44 pounds, 11 ounces. The North Carolina BASS Federation Nation president relied on his experience on Gaston Lake to bag a final day total of 11-14.

Murray caught most of his fish with a crawfish color Bomber Fat Free Fingerling crankbait casting it along the rocky points and flats of Gaston Lake. He used the crankbait during the first two days of competition.

“The key to this win was fishing main lake structure,” said Murray, who estimated that the bigger fish he caught each day were about 10 feet deep.

“Today was a totally different day,” he said. “We were fishing the culverts and the riprap and then I picked up a jig and threw it as close as I could to a boat dock and caught a 3-pounder.”

Murray adjusted to the sunny skies and added three more keepers to capture the tournament.

Winning the divisional and leading his North Carolina team also qualified Murray for the BASS Federation Nation Championship presented by Yamaha Outboards and Skeeter Boats, the ultimate amateur bass fishing championship to be held Oct. 28-30 on the Harris Chain of Lakes out of Tavares, Fla. 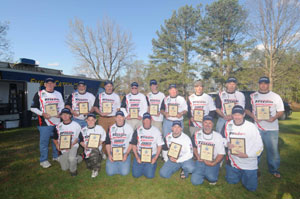 The Alabama squad rallied on the final day to win the Southern Divisional team competition by a mere 5 ounces over the host North Carolina team.

The other six state champions who advanced to the national championship were David Boyd (Florida); Brandon Card (Kentucky); Kenneth Pannell (Alabama); Chris Neely (Georgia); Brent Long (South Carolina); and Ben Parker (Tennessee). The Southern Divisional qualifiers will be among the 55 championship contenders vying for six spots in the 2010 Bassmaster Classic set for Feb. 19-21 on Lay Lake out of Birmingham, Ala.

Alabama won the team competition of the Southern Divisional with a cumulative weight of 261 pounds, 12 ounces. The 12-man squad claimed the divisional’s top prize — a $30,000 Skeeter bass boat rigged with a Yamaha outboard motor. 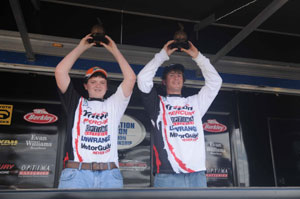 Winners of the Junior Bassmasters Southern Divisional were Tanner Plumlee (left) in the 11-14 age group and Ross Burns in the 15-18 age division.

The catches of the young anglers competing in the Junior Bassmasters Southern Divisional today were also added to the cumulative weights of their respective state teams in the adult competition. Tanner Plumlee of Tennessee won the 11-14-year-olds age division by catching three bass weighing 4-11. Ross Burns caught four bass weighing 7-3 to top the 15-18 age group and help the South Carolina team finish third. Both youngsters qualified for the Junior Bassmasters World Championship to be held in conjunction with the Federation Nation Championship in October. The tournament results for the Junior Bassmasters Southern Divisional will be posted at Bassmaster.com.

The Southern Divisional is the first of six regional qualifiers for the Federation Nation Championship. Next on the schedule is the Western Divisional set for May 11-15 on the Columbia River out of Tri Cities, Wash.