How far can a Classic victory really take an angler’s career?

Mark Davis won $50,000 as the 1995 Bassmaster Classic champion on High Rock Lake, and it’s made his career. 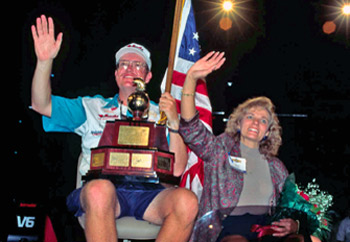 Mark Davis, the 1995 Bassmaster Classic, says the title means more than the money.

That’s not to say it’s his only trophy. He has five wins and has taken home exactly $1,253,121.30 with BASS, and a measurable amount more on other circuits. But Davis said he still has a lot of sponsorship deals and speaking engagements based primarily off one tournament — three days — almost 14 years ago.

This year’s champion will make exactly one zero more in payout than Davis did in ’95, but he’s not bitter. According to Davis, the cash reward, in the long term, is arbitrary.

“That’s the one thing that Classic has that other tournament circuits have tried to duplicate and failed,” Davis said. “You’re seeing $1 million payouts at the FLW Championship, and still, it’s just not the Classic. It’s not all about the purse. Whether it’s a million or a half million and it doesn’t matter.

“Whoever wins the Bassmaster Classic, people know them and remember them. The Classic is a part of bass fishing history. It truly is history every time we have a Classic, and it’s not that way with any other event.”

Clunn said he saw the star potential of the big tournament early in career and shaped his style to match the mystery lake format that used to accompany the Classic. In Clunn’s first Classic victory in 1976, anglers didn’t know the location of the tournament until right before the tournament started. 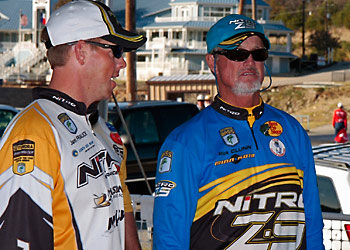 Rick Clunn always put a lot of weight in the Classic.

“In the beginning of my career that’s what I developed in myself, because I knew success would be determined by winning the Classic,” Clunn said. “Nothing could give you credentials and credibility like the Bassmaster Classic. I prepared and studied for it all year long — even when I was fishing other tournaments.”

Among professional anglers, the Toyota Tundra Bassmaster Angler of the Year seems to be the golden egg, proving more talent and consistency than the possible luck of one tournament. But fans see things differently, which was never more obvious than in the greatest angler debate hosted by Bassmaster.com in 2004.

It came down to two guys: Clunn and Roland Martin. Martin has nine AOY titles and no Classics, while Clunn has one AOY title and four Classics (as well as two U.S. Opens, one Redman All American, and two big FLW tournaments).

“If they had just compared our careers with BASS, Roland probably would have won,” Clunn said. “People realized, however, that in my career, I tend to perform better in the biggest tournaments that are put on. The Classic has pretty much completely defined my career.”

When Michael Iaconelli won the Classic at the Louisiana Delta in 2003 and danced his way into history, he was like most anglers trying to make it up through the ranks of the Federation Nation, to professional, to the top tier. 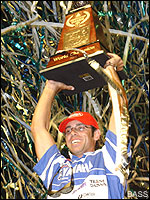 Mike Iaconelli says nothing compares to his Classic title.

Iaconelli said nothing he has done before or after that Classic has provided the same kind of jolt to his career — not even his AOY title in 2006.

“After you win, it moves you up into an elite class,” he said. “There are not a whole lot of people that walk the face of the earth that have that title.

“The best part about winning the Classic is the residual money you get over the next four or five, or even 10 years. That’s really where it adds up.”

Two-time Classic champion Kevin VanDam said he wants his career to be defined by AOY titles because they’re harder to win and prove more in his eyes, but admits that there’s no kind of attention like the attention focused on a Classic champion.

“There’s nothing like winning the Classic,” VanDam said. “Without a doubt, it’s done more for my career than anything else.”

Clunn said allure of a Classic victory is as simple as human nature.

“I know being around humans and sports in our country, from day one, you start doing things and your parents tell you to be the best,” he said. “How often do you get to say that you are? I’ve gotten to say that four times.”

But Davis contends that a Classic victory can disappear as quickly as it comes if the angler doesn’t handle it with care. He said $50,000, or even $500,000 doesn’t begin to touch the value of his Classic victory.

“This is the only tournament you win that can do this for you,” Davis said. “Any other event you win, you take the money, put it in the bank and once that money is spent, it’s forgotten about and you move on.