GEORGETOWN, S.C. — When it was announced the Strike King Bassmaster College Series National Championship presented by Bass Pro Shops would be held on Winyah Bay, Murrells Inlet native Andrew Vereen and his Coastal Carolina partner Connor Cartmell knew they had to qualify for the prestigious tournament. 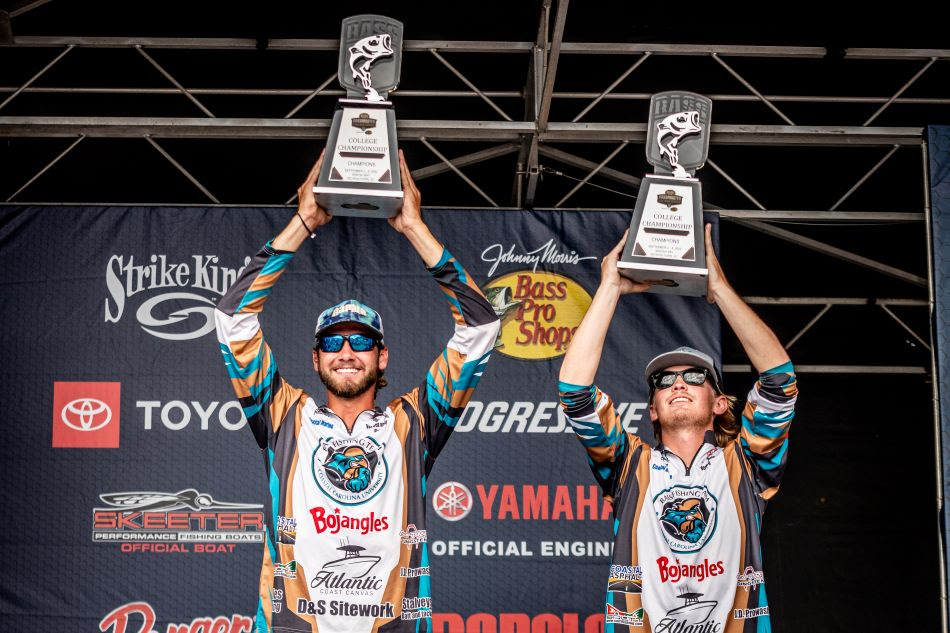 With a three-day total of 40 pounds, 2 ounces, Vereen and Cartmell made their goal a reality and earned the National Championship victory on home waters. They hoisted their trophies in front of a raucous crowd filled with hundreds of their supporters in downtown Georgetown, just a few miles from where Vereen grew up, as well as the school they attend.

“When I was 14, I remember watching it on TV and thinking it would be so cool to win that,” Vereen said. “We go to so many tournaments and see the trophies and only one team wins them. To win a National Championship feels like a million bucks.”

Not only did the Coastal Carolina duo win $5,000 and two Humminbird Helix 10 units, they also secured their spot in the College Classic Bracket. The Top 3 teams from the National Championship will compete in the Bracket with date and location to be announced soon.

“We have traveled so far to get to this point,” Cartmell said. “People thought we were crazy driving to Michigan, to Arkansas and even to Lake Norman. Driving all these miles. ‘Why are you spending so much money to go catch a bass?’ This is why.”

After landing in second after Day 1 with 14-6, Vereen and Cartmell took the lead on the second day with 15-1 before finishing the tournament with 10-11, enough to give them a 2-5 advantage over Jackson Swisher and Seth Slanker from Florida Gateway College.

After falling short at Saginaw Bay, Vereen and Cartmell qualified for the National Championship at the Wild Card event at Logan Martin in June with an eighth-place finish.

“When we qualified in Alabama it was the best drive home,” Vereen said. “All I have been thinking about is this tournament for the whole summer. I’ve been saving money so I can pay for gas and everything. For it to come together like it did, it is crazy.”

Vereen and Cartmell focused their efforts way up the Santee River, a very shallow part of the river with current that flows from the dam at Lake Marion that only got shallower as the tide receded. In that area, they targeted several types of wood cover, but mostly big laydowns that stuck out in the water.

“The bigger bites we had, the logs were probably 20 to 40 feet long and 3 to 5 feet wide. Some were in 3 feet of water, including our biggest fish, and some were in 6 or 7 feet of water. As long as we could see the logs, we were getting bit.”

Gizzard shad, current and a plethora of structure created the perfect ingredients for the CCU duo. Big topwater walking baits were the best producers, but they mixed in a popper, a prop bait and a jig as the tournament progressed.

“The fish had nowhere else to go,” Vereen explained. “Water flows down from Lake Marion and right now they aren’t turning water loose, which is good. It keeps it steady so the fish are willing to bite a little better. That river is full of nothing but rock, timber and wood when you get that far up and that is all we are fishing. The easiest thing to throw is a big topwater and sometimes they will flat out crush it.”

“Three times today we had a small school follow a fish (we hooked) out,” Cartmell said. “He caught one that was pushing 2 pounds and there were four or five others with it that were over 5 or 6 pounds. You can see them roaming at times. Today I saw two over 8 pounds just cruising the bank.”

With bags of 11-15, 16-2 and 9-12, Swisher and Slanker finished with 37-13 total. While they may not have won the event, the Florida Gateway College team secured their ticket to the College Classic Bracket with their second-place finish.

“It is an amazing opportunity and another toward to going to the Bassmaster Classic,” Slanker said. “I have dreamed about that since I started bass fishing. I couldn’t be more thankful and blessed to be here.”

Last year, Swisher had an opportunity at qualifying for the Classic via an Opens win, but fell just short of that goal. Now, he will get a second chance.

“It is a supercool thing,” he said. “I was close last year and I blew my shot. It feels nice to get another shot at it. You don’t get this opportunity very often.”

Swisher and Slanker fished a specific creek in the Santee River that they shared with Hayden Gaddis and Ben Cully of Carson-Newman University, who finished sixth. Once they got there, they put the trolling motor on high and didn’t pick it up until they left for weigh-in.

With cypress trees and laydowns all around, a buzzbait and a Senko were their best producers.

“Today, Seth picked up a prop bait and gave us a 2-pounder in the last five casts which really made a big difference,” Swisher said.

Tyler Christy and Trey Schroeder from McKendree University were the only team in the Top 10 fishing the Sampit River and it paid off with a three-day total of 36-4 and a third-place finish.

They were one of the most consistent teams, landing 12-14 on Day 1, 12-0 on the second day and then 11-6 on Championship Sunday. Christy made the College Bracket his first season and now will get another opportunity.

“We have been in this situation before,” Christy said. “Just the thought of another opportunity to get back there knowing how much I have grown as an angler in four years is something I have wanted since I made it the first time. I know I am so much better now and now I get one more shot to complete my dream.”

Using a buzzbait and a shaky head, one pocket produced most of their bass this week.

“It was almost like trout fishing,” Schroeder said. “You would pull one off a little eddy and there would be another one there two minutes later. The biggest key was putting the trolling motor on 8 and getting into skinny water and making a few fish react.”

Solomon Glenn and Ryan Thomas from the University of Montevallo won the Big Bass of the Tournament with a 7-3 largemouth they caught on Day 2.

The Top 3 teams, as well as UNC Charlotte’s Louis Monetti and Michael Fugaro via their Team of the Year title, will now set their sights on the College Classic Bracket. The March Madness-style tournament will give the winner an automatic berth into the 2023 Academy Sports + Outdoors Bassmaster Classic scheduled for March 24-26 in Knoxville, Tenn., as well as paid entry into the 2023 St. Croix Bassmaster Opens presented by Mossy Oak Fishing and the use of a Toyota Tundra and a Nitro Boat.