Cole Sands and Conner Dimauro took the lead at the Carhartt Bassmaster College Championship with a 24-pound limit that included a 7 pound 15 ounce Chickamauga green piggy. 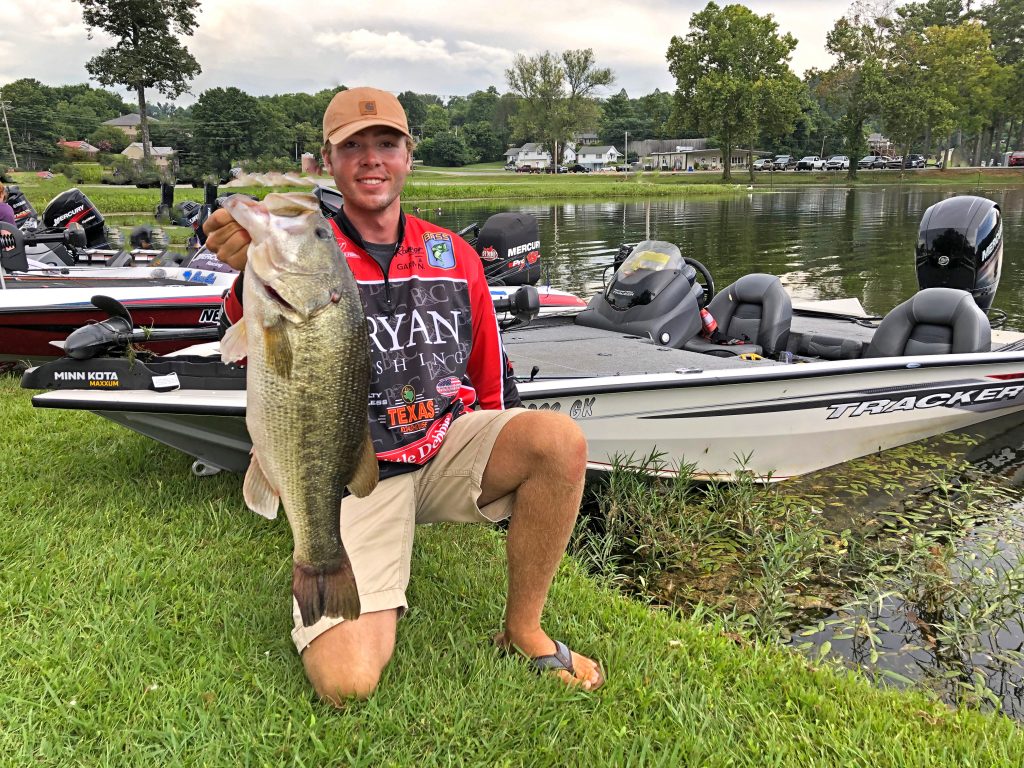 Sands already has two major college victories to his credit on “The Chick” – so his success Thursday is no great surprise, but his decision to fish from a smaller, slower, aluminum boat compared to his competitors, is worthy of an eyebrow raise.

Add the fact he’s just 22, and already working on a Masters in Business Administration degree, and Cole Sands quickly becomes a long tall lanky version of everything that is mega-impressive about college bass fishing.

“The fact Cole chose to self-report a rules violation back in late April on Day 2 at Bull Shoals to surrender his Day 1 lead, says everything you need to know about the character of Cole Sands,” says Hank Weldon, Director of College B.A.S.S. “He represents himself and college bass fishing in exactly the way we hope every angler will,” adds Weldon.

Local hard-core anglers around “The Chick” speak highly of Sands too, including BassQuest YouTube channel founder, Caleb Bell. “The crazy thing about Cole and his brother Corbin is how fast they locate fish. They’re absolutely among the most naturally gifted anglers I’ve ever known, and they’re great Christian guys on top of being incredible anglers,” says Bell.

By all accounts Sands seems as exceptional as the boat he and partner Conner Dimauro used to take the tournament lead. It’s an 18-foot aluminum Tracker with a 150 HP outboard that runs at least 10 mph slower than most of the boats in the field, but Sands says running a smaller ‘tin’ boat has several advantages. “You get more boat for your money when you buy aluminum, plus you get better fuel economy, and you’re less recognizable when you’re out there on your best fishing spots,” he grins.

That’s pretty mature logic for a guy just 22 years of age, who actually struggled to appreciate Tennessee at age 10 when his family moved here from his Alaska birthplace, mostly because it didn’t feel nearly as wild and free as The Last Frontier vibe of America’s 49th state. “I was pretty frustrated at first, but then I got involved in a junior bass fishing club, and it literally changed my life,” Sands says gratefully.

Sands admits he’s sharply focused on being a professional angler someday, but only after finishing his education at Bryan College on the shores of Lake Chickamauga. “I love college fishing. I love the team format and the teamwork. And I can work as a graduate assistant and get my MBA for free, so it only makes sense to enjoy the next several months here, before trying to fish for a living,” he concludes.

Faith, family, academics, and a superior talent for catching bass. That’s the mighty impressive young life of the tall, lanky Bryan College angler in the aluminum boat, who by all accounts may very well be one of competitive bass fishing’s next big things.