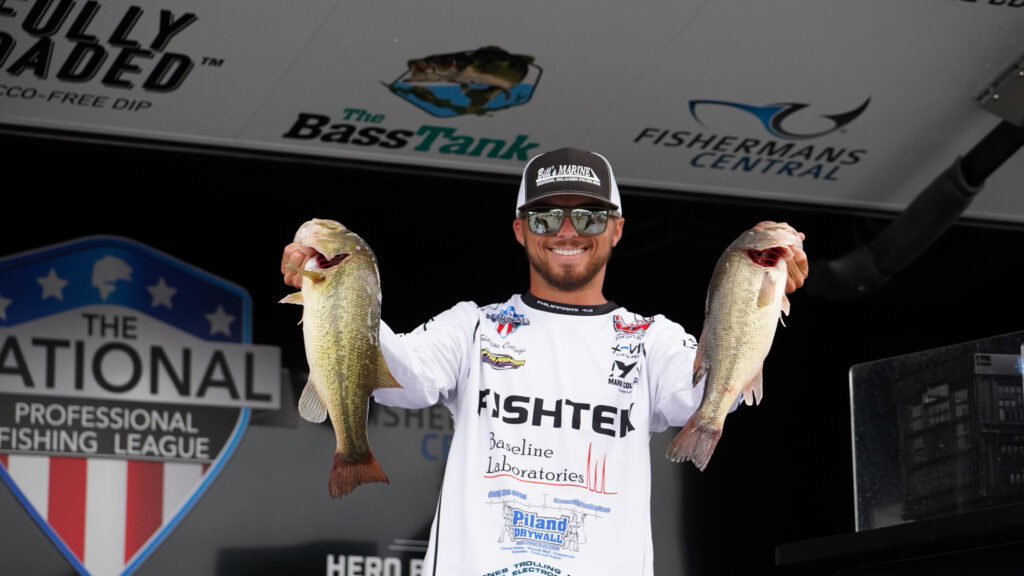 Starting off his morning not like he had planned, Collings was sitting on one bass at 9AM. The local knowledge kicked in and the local angler made the trek way down the lake. Flipping some docks to get a limit, the day turned around in a big way.

“This morning was pretty terrible. I had a small fish and decided to make a move. I got on some docks I thought I could catch some keepers and caught a limit for like 10-pounds or so. Around noon, I fished around and never got a bite.”

Knowing the offshore bite would settle in, Collings got back to where he caught some fish on day one and caught a 4-pounder, culling to around 12-pounds. The next couple hours were tough, but he maintained his focus and revisited some offshore areas as live coverage ended.

“Once again, live goes off and I got to an offshore spot and basically back-to-back I caught two that were almost 4-pounds. I went from 12-pounds to 14-pounds to 16-pounds on those two bass. Each one was like 2-pounds worth of upgrades.”

Collings understands the timing of his offshore areas and doesn’t get discouraged with a slow start. In the fall, Grand lakes seems to turn on in the evening when the shad pull up and the bass get to biting.

“The timing is key. You can fish them all day, but they don’t bite. I am fishing community holes; I know how they set up and when they bite. I can tell they are set up to feed. I want to win this more than anything. I told my camera man, if the weather is right tomorrow, I’ll stay on my big fish holes all day cause the wind positions them and they will bite all day.”

If the weather is right, Collings will fish for bigger bites but isn’t afraid to go and catch a limit. After a limit, 5 to 6-hours on his offshore areas to end the day and hopefully take the win on his home pond.

Taylor Watkins added 15-pounds to his day one weight of 17-pounds, 9-ounces to finish the day in the 2nd place spot with a two-day total of 32-pounds, 9-ounces. Fishing a topwater first thing, Watkins went back to work on his dock deal and was able to catch his two biggest quality fish for the day.

“I fished on top this morning and basically wasted a bunch of time. I made a move to my primary area and got a small limit, then moved back further in the creek to some docks. I caught two good fish there today, and two good ones yesterday.”

The magic docks have produced several 3.75 to 4-pound quality bass for Watkins the first two days and its unknow whether the area is reloading or if those are resident fish.

“Either way, I am and planning on not catching any there tomorrow. Other than that, I lost a 6-pounder with like ten minutes left today – I’ll probably spend some time there tomorrow, too.”

With his main area way down the lake, and the big fish spot close to the takeoff, the Clinton, Tennessee angler is unsure how tomorrow will go, and hasn’t made a game plan yet.

“I saw a lot of quality fish in practice in my areas, but I didn’t think they would hold up, but that’s all I have. I saved one area, fished it today, and didn’t get a bite. There is one small stretch I got several bites in practice there, I may try it again tomorrow.”

Progressive AOY Leader Brandon Perkins added 14-pounds, 11-ounces to his day one weight of 17-pounds to end the day in the 3rd place spot with a two-day total of 31-pounds, 11-ounces. Getting off to an early start this morning, Perkins felt some pressure fall off his shoulder and was able to fish for bigger bass for the rest of the day.

“I made a mental mistake, I hung out in a place thinking I could catch some bigger fish, and unfortunately never did. A place I caught some big fish in practice, I got in there today with the intention of just fishing through, but I ended up gambling and tried to catch big ones. I’ll take it thought, I was able to give my fish a break and I am ready to get after them again tomorrow.”

With the goal this week to win the Progressive AOY, Perkins is not taking his foot off the pedal. Playing it safe is not in the cards and knows that with as little experience as he has on Grand Lake, he is around fish and getting enough bites a day to hang.

“I am good, I am where I want to be, and I am thrilled with it so far. I am not playing it safe at all. Every day in practice I got a big fish over 4-pounds, and today was the first day I didn’t. I got more bites today than yesterday. I have two or three areas I have fished both days, but I didn’t touch my second-best area today. I wasn’t saving anything, I just felt like with the weight I had, I had to find bigger bites.”

With a 15-pound, 10-ounce bag today, Bryant Smith added to his day one weight of 15-pounds, 1-ounce for a total weight of 30-pounds, 11-ounces to finish in the 4th Spot. Utilizing a mix of topwater and flipping presentations, Smith has gone to work on a shallow pattern to catch his fish this week.

“On day one, I caught a few good ones on top and a few flipping. Today, I think all but one was on a topwater. I am basically looking for flat banks, and if it has isolated wood, it’s even better.”

Fishing a mix of areas, he found in practice and a few areas he located during the tournament, the Roseville, California anglers has fixed a mix of new water every day to keep his areas fresh.

The key to his areas?

“The flatter the bank, the better it is. And, I am casting right up on the bank”

With a two-day total of 30-pounds, 7-ounces, James Biggs added 13-pounds, 2-ounces to his day one weight of 17-pounds, 5-ounces to finish the day in the 5th place spot. Running a similar program as yesterday, Biggs wasn’t able to capitalize on some bigger bites on day two.

“I didn’t get as many big bites, but I also missed a lot more, missed several, they just were not eating it good. I either missed them or they came off today.”

Fishing some of the same water, Biggs only hit one or two of his areas and fished lots of new water. With an early limit, he took advantage of the extra time to try and focus on bigger bites.

“I saved a bunch of stuff for tomorrow, and I have been having fun. I don’t worry about pressure. My goal was to make the Championship and I have to catch them tomorrow. I am a firefighter, I deal with real pressure, these are just green fish. If I lose one, or catch one, I know the goal and just keep fishing. I did catch my biggest fish today offshore.”

“I am fishing the bridges, bluff walls, suspended fish. I’m flipping the big jig and forcing them to eat it, it’s a reaction bite. Only one fish this week I casted and dragged it by and got bit. They are biting it on the fall, I am not feeling it. I just pick up and they are moving off with it.”

Check out the OFFICIAL LEADERBOARD and then set your alarm for Showdown Saturday.