Collings Started Early and Kept Charging for the Day One Lead on Grand Lake.

Making two late culls after Live Coverage had ended, local favorite Sheldon Collings put together a 19-pound day with a 5-pound, 3-ounce kicker to take the day one lead here at Grand Lake O’ the Cherokees. 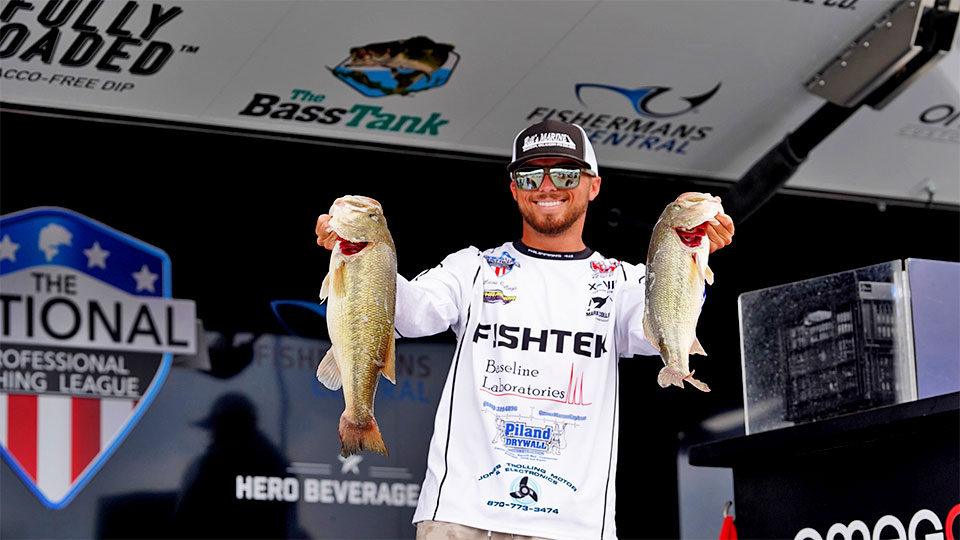 Collings sampled both shallow and deeper areas to catch his bag and started off with a big bite early in the morning. After the lunker got the day started, Collings caught fish slow and steady all day long.

“I stayed in one part of the lake today and fished anywhere between 1-foot and 30-foot, and I caught fish on everything I fished today, besides a topwater bait.”

Saving some areas for later in the week, the Grove, Oklahoma angler fished one section of the lake on day one and it was a decision to visit an offshore area again later in the day that made it happen.

“I fished a spot earlier this morning and never got bit. They were there, I could see them on active target, but they were suspended and there was no bait around. After Live Coverage ended, I slipped back in there and caught a 4-pounder and another 3.5-pounder real fast.”

The offshore bite is a timing deal according to Collings and while fishing a combination of reaction baits and dragging baits, covering water fishing productive areas produced the leading weight.

“I have a lot of stuff on the opposite side of the lake that I left alone for the next couple days. I had like 14-pounds with four bass all day and thankfully got those bigger ones to go later in the day.

Taylor Watkins caught 17-pounds, 9-ounces of Grand Lake bass to finish the day in the 2nd place spot. After fishing his main area this morning with several other boats, and only one bite to show for it, a decision to slow down his presentation led to several key fish, including a 3-pound, 14-ounce lunker.

“I had a good practice and I truly thought I was going to catch them, but in a different way than I did today. I fished until around 10 am and only had that one bite. I swung back through there, swapped up my presentation and got a few bites. That really settled me down and I was able to catch my weight.”

Saving some good areas from practice for later in the week, a repeat of day one on the same area may not happen, but the Clinton, Tennessee angler is just looking to get back out there.

“I knew there was quality in that area, and I don’t know if I can catch them on that stuff, but I saved a decent area I got some good bites and I’ll give that a go.”

With 17-pounds, 5-ounces on day one, James Biggs fished conservatively to save fish for the rest of the week. Fishing a combination of docks and other shallow areas, Biggs ended the day in the 3rd place spot.

“I made one cull after live went out, but I basically fished docks with brush and saved some other stuff. I caught some fish early and made a bait switch and caught a couple more. My smallest fish were 3-pounders, but my biggest fish was only a 4-pounder. I was semi surprised with the weight I had today.”

In the 4th place spot, the current Progressive Angler of the Year leader Brandon Perkins kept the pressure on his competitors with a day one weight of 17-pounds. Although the bite was slower than expected, the Tennessee angler stuck with his shallow dock pattern and put quality bass in the boat.

“I really thought I would catch more fish today, and it honestly has me a little bothered. I expected to catch 12 to 14-pounds easy, a few times, so I don’t know what the deal was.”

With folks watching on live, Perkins fished around docks with a flipping bait and worked some areas in between as well. The bite was not fast and furious, but the NPFL Pickwick champion caught enough to finish in the top five after day one, keeping his spot atop the AOY standings alive.

“Other than the no wind, I don’t know what the deal is and the weather coming in is going to be unique for what I am doing. I can make some adjustments, I mean I caught a few on some other baits today, but the docks have been the deal. I am not dialed on docks though. If the sun goes away, the fish will roam, or go away totally.”

With 16-pounds, 7-ounces, Bret Loomis sits in the 5th place spot after day one. Working a combination of shallow and offshore spots, Loomis caught fish on topwater, flipping a jig, and a big hair jig.

“This morning I started out shallow with a whopper plopper and caught one. Then I went to a dock I found in practice and flipped in and caught my biggest one.”

Using a borrowed boat after losing his trolling motor, Loomis spent the rest of the day offshore working a shaky head and hair jig to catch the rest of his limit.

“I had a few places from practice, and I don’t know if I can duplicate it tomorrow, but I didn’t set the hook in practice, so I don’t know how many are there. Caught one of my better fish on a Brown Dog Tackle Hair jig after they got off the shaky head.”