MASSENA, N.Y. (Aug. 16, 2022) – It was a smallmouth slugfest Tuesday at the kickoff of the Major League Fishing (MLF) Tackle Warehouse TITLE at the St. Lawrence River Presented by Mercury – the Pro Circuit Championship. Pro Joey “Cowboy” Cifuentes of Clinton, Arkansas, stayed atop the unofficial leaderboard throughout most of the day, and despite several pros being in hot pursuit, was able to end the day in the top spot with a five-bass limit weighing 23 pounds, 4 ounces. Cifuentes’ final total put him a mere 4 ounces ahead of pro Kurt Mitchell of Milford, Delaware , who brought a limit to the scale weighing 23 pounds even, good for second place. 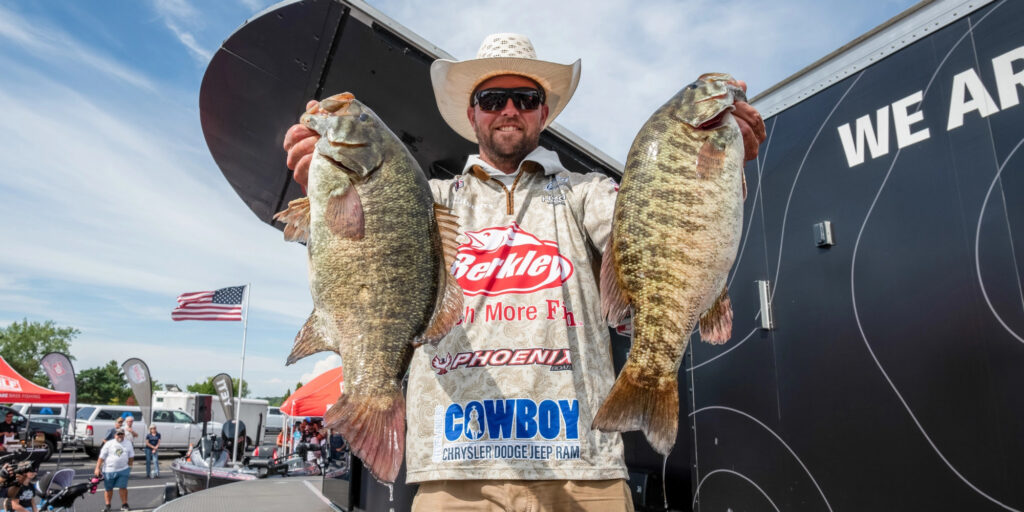 With nine pros weighing in 20-pound-plus bags, and pros fishing from one end of the St. Lawrence River to the other, the Smallmouth Mecca is showing out and the tournament is setting up to be an exciting event. The six-day tournament, hosted by The Town of Massena, showcases the top 48 pros in the 2022 Pro Circuit standings, along with last year’s reigning TITLE champion and reigning Angler of the Year (AOY) – all competing for a purse of more than $800,000 and a grand prize of up to $235,000.

Cifuentes made big waves on the St. Lawrence River in 2021, bringing in 67 pounds, 5 ounces over three days before a disappointing final day that yielded only 12-5 earned him a third-place finish. The Arkansas pro said he is focused and ready for revenge on the fishery and spent the day targeting deep water, close to ledges, after making a long 1½-hour run downriver.

“I have approximately 50 spots out that way to hit, and I only fished maybe five of them today, but the area where I think I can get the real big ones is close to the border and only has two main spots,” Cifuentes said. “If I don’t have a big bite pretty quick there on Thursday, I’ll definitely have to expand that area.

“I caught my biggest fish today in 65 feet of water and I didn’t catch all my good ones that deep, but there are some really big ones out there.”

While making that long of a run means less time with his bait in the water and a rough ride to and from his prime location, Cifuentes said he believes it’s worth it.

“First thing in the morning on this fishery is critical for me, because I tend to catch smaller fish as the day goes on,” Cifuentes said. “I have a shorter time window due to the long run I’m making, so I just have to make that time count. I pulled up to my area around 8:30 a.m. and had 22½ pounds by 10. I pulled up on another spot around noon and caught a 4½-pounder, and that put me at the 23-4.”

Cifuentes said he didn’t know if he could pull another smallmouth close to 6 pounds out of his main spot Thursday, but he saw some of the biggest fish in that area on his camera during practice, so he’s willing to take the chance.

“I’m fishing around the Canadian line, literally as far down the river as you can go,” Cifuentes continued. “I know most of the big ones live out in Lake Ontario, so I want to be as close to it as I can get.”

Cifuentes said he caught all his fish on Tuesday with a brown back-colored Berkley Powerbait Maxscent Flat Worm – a known smallmouth favorite – on a drop-shot rig.

“I think one of the keys to catching these fish is the 6-pound Berkley Trilene 100% Fluorocarbon (line) which is really light compared to what a lot of other guys are probably using,” Cifuentes added. “The fish I’m targeting are really pressured, so I like to use a light line and a small, #6 Berkley Fusion19 Drop-Shot Hook . I think that makes a big difference as well.”

The standings for the 25 pros in Group A after Day 1 on the St. Lawrence River are:

The MLF Tackle Warehouse TITLE Presented by Mercury – the Pro Circuit Championship – features a hybrid tournament format. All 50 anglers are seeded into two groups of 25 – Group A & Group B, based on points earned in 2022 qualifying events – where they will compete in Qualifying Rounds over the first four days of the tournament. Group A will fish again on Day 3, and Group B will fish Day 2 and Day 4, with total weight determined by the cumulative weight of their biggest five-bass limit from both days.

The winner of each group will then advance directly to the Championship Round on Sunday, while pros who finish in second to 10th place in each group will battle it out with zeroed weights in the Knockout Round on Saturday. On the sixth day of the event, the Championship Round, weights will again be zeroed and the top eight pros from the Knockout Round, plus the two Qualifying Round winners will compete. The winner will be determined by the heaviest five-bass limit of the final round.

Anglers will take off at 7 a.m. ET each day of competition from the Massena Intake Boat Launch, located at 1415 State Hwy 131 in Massena. Weigh-ins will also be held at the boat launch daily at 3 p.m. The MLF NOW! broadcast team of Chad McKee, Marty Stone and J.T. Kenney will break down the extended action from 7:30 a.m. to 2:30 p.m. ET daily. Fans are welcome to attend the event or follow the action online through the MLF NOW! live stream and coverage at MajorLeagueFishing.com.

Along with the launch and weigh-in, fans and community members are invited to the MLF Fishing and Outdoor Expo on Saturday and Sunday, Aug. 20-21 from noon to 8 p.m. ET at the Massena Intake Boat Launch, where fans can meet the pros and check out the latest in fishing and outdoor gear. The expo includes live music, food trucks, kids’ activities, giveaways, fireworks and more.

The first 100 kids (10 and under) will receive a free rod and reel at the Expo on Saturday and Sunday and fans can register for a Polaris Sportsman 570 ATV giveaway onsite at the Expo. The winner will be drawn after the final weigh-in on August 21. PAW Patrol’s Skye and Marshall will also be at the event with MLF pro Charlie Evans and will be available for photos. Appearance times may vary. Visit MajorLeagueFishing.com for updates and more details.