These are the days when temps soar so high even small dogs like Rowdy Gleason look for a cool slab of concrete to lay their bellies on. 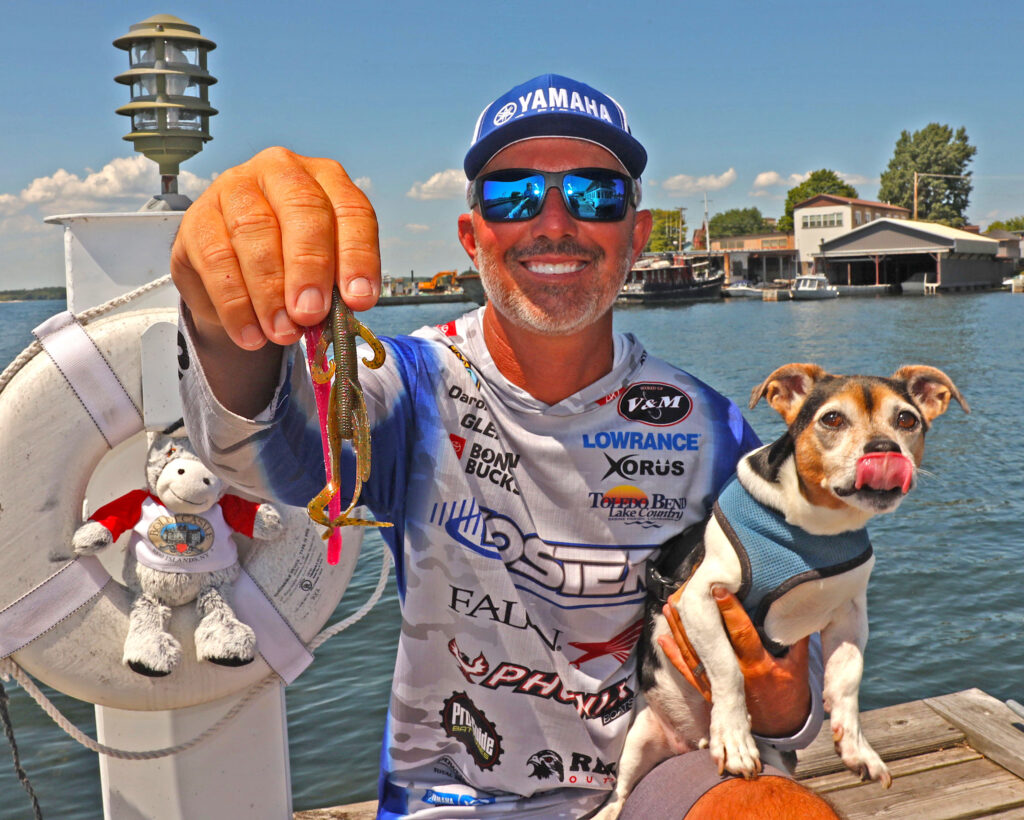 His ‘dad’ Darold Gleason wouldn’t mind doing the same, but he gets paid to catch fish, not lay on the porch. So, what two lures does the Elite Series pro and famed Toledo Bend guide lean on to catch fish when the thermometer hits a hundred?

“Obviously, in the extreme heat of summer, you could go with a deep diving crankbait, big worm, or a football jig, but I chose two lures to help people catch fish in this heat, based on two factors – simplicity and versatility,” says Gleason.

“So Rowdy and I are choosing a V & M Baby Swamp Hog and a 4.5” Straight Shooter dropshot worm,” says the always comical Gleason, who was one of the very first anglers to register for Toyota’s Bonus Bucks program 14 years ago.

“I can hook a Baby Swamp Hog on a Carolina Rig behind a 1-ounce egg weight and reach fish that are 20-25’ feet deep. But I can also pitch it around the shade of dock, as well as submerged vegetation,” he explains.

“Again, it’s versatile. A Gleason’s Candy colored 4” Baby Swamp Hog imitates everything from a crawfish to a bluegill, and it gets bites from big fish, even when it’s 100-degrees outside,” says Gleason, who has a wall full of 10-pound fiberglass replicas representing the many giant largemouth he’s caught from Toledo Bend.

“This choice might surprise some people, but the goal is to get bites during smokin hot conditions, and very few rigs in bass fishing generate more bites than a drop shot. If you don’t believe me, look at the front deck of nearly any pro’s boat, and you’ll see at least one drop shot rigged up everywhere we go on tour,” says the Yamaha pro.

“The Straight Shooter worm is super soft, so it’s loaded with action, but it also has a ton of salt, so fish hold on to it longer,” he adds.

Much like the Baby Swamp Hog, Gleason says he’ll cast a hot summer drop shot from docks to deep water. He adjusts the leader length between the hook and weight below depending on what habitat he’s fishing.  He prefers 10” of line between hook and weight around docks, and more like 20” when fishing the deeper zones.

So while several options abound for dredging up summer bass by anglers brave enough to bear the heat, remember these two suggestions from Gleason as straight-up “bite getters” no matter how high the temp.

And remember, you can’t catch ‘em if you’re laying on the porch.